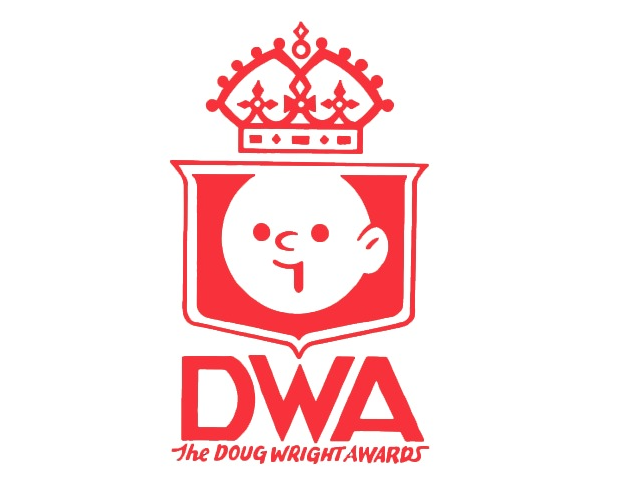 The Doug Wright Awards have started a campaign to crowdsource specific costs for their 2014 event, taking place during TCAF on May 10 at the Ballroom of the Toronto Marriott Bloor Yorkville Hotel. This is the 10th anniversary of the awards, and as a participant in the organization of the event in years past, I can attest that the costs of the event and the production of the actual awards puts quite a strain on the non-profit organization and its tiny group of volunteers.

To offset the costs this year, the Wrights have launched a Kickstarter campaign. They are asking for exactly $6135.00 to cover the cost of the event, including production of the awards, the famous trophies, and a small 10th anniversary book, as well as travel costs for guests, including bringing Canadian Golden Age artist Jack Tremblay from Montreal.

The Wright Awards are a non-profit organization who have been instrumental in raising the profile of comics art and graphic novels in Canada. They helped bestow early prominence on young artists like Bryan Lee O’Malley, Kate Beaton, Jillian Tamaki, and Michael DeForge, among many others, and have honoured the work of the cartoonists who worked in the mostly-forgotten history of Canadian comics. Every year they put on an entertaining, classy show that recognizes and promotes the work of the very best our artform has to offer.

The Kickstarter ends May 8 and the minimum ask is $1.00. There are some nice pieces of art and other bonuses being offered as incentives for higher commitments. Check it out!
—–

“An effort to support the 10th annual Doug Wright Awards including a collection of new Nipper-inspired art, photos, memories and more:

Our host will be Kids in the Hall alum and Hannibal actor Scott Thompson, and we will be honouring the surviving artists of “The Canadian Whites” by inducting them into the “Giants of the North, the Canadian Cartooning Hall of Fame.” The Whites were black-and-white comics produced between 1941 and 1946 that contained a host of original (and iconic) Canadian characters such as Johnny Canuck, Canada Jack and Nelvana of the Northern Lights.

These characters were created by the likes of Murray Karn, Adrian Dingle, Gerry Lazare, Leo Bachle and Jack Tremblay. The event will also serve as the official launch of a new collection of the complete Nelvana of the Northern Lights (by Adrian Dingle) being published by CGA Comics.

As a special thank you for those who decide to support our Kickstarter this year we’ve decided to put together a collection of work showcasing great Canadian artists and their interpretation of a Doug Wright’s Family or “Nipper” comic. This collection will also have fun stuff the Doug Wright Awards has accrued over the last few years such as Dustin Harbin’s comic essay about the awards as well as DWA posters and other ephemera.”
Published by Bado at 2:00 AM