World Press Cartoon Board of Directors postpones the 2014 Salon 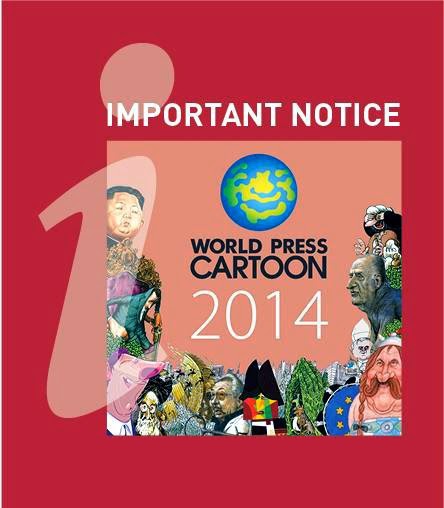 By its nature and scope, World Press Cartoon is an event whose viability depends on the combination of multiple supports and sponsorship. The natural main sponsor is the city that welcomes and associates its name to World Press Cartoon. This was the path that World Press Cartoon and Sintra followed together for the last 9 years, making Sintra the international capital of humour drawings in the press.

In the context of the municipal government transition that resulted from the local elections held in October 2013, the World Press Cartoon Board of Directors has been trying, by all means, to organize the salon 2014 in Sintra. The event was announced, last October, on the basis of a gentlemen´s agreement with the winning candidate, but this commitment has not yet been honoured by the new administration of the municipality.


The works of the authors were received and registered, as usual, but the meeting of the jury, scheduled for February, was cancelled, pending the formal decision of our main sponsor. Unfortunately, were are still waiting for a final decision and it is not possible to organize this Spring the 2014 salon, as expected and announced. The organization decided on a postponement, while searching for an alternative solution that ensures the continuity of the event within the standards of excellence that are its' trademark.

To all the authors who submitted their works, we apologize for this change in timetable and the associated disadvantages. Our goal is to continue to celebrate the creativity that feeds annually our catalogue and our exhibitions. More than ever, we appreciate the incentives and the words of encouragement that we have received from authors and newspapers. Our commitment is to fight for the life of this salon that over a decade has proved to be the mandatory meeting point to cartoons and cartoonists throughout the world.