From the Middle East Monitor.

The Guardian has come under fire over its coverage of anti-Semitism after the paper refused to publish a cartoon depicting Jeremy Corbyn’s critics and Israeli Prime Minister Benjamin Netanyahu in a negative light and also for the paper’s decision to pull a letter signed by 100 prominent Jews in defence of the Labour leader.

The British daily, which has historically been identified with progressive issues on the left, came under sharp rebuke from Steve Bell, one of its most well-known political cartoonists.

Bell, whose cartoons have appeared in the Guardian since 1981, railed against the paper’s editors in an email following its decision not to run his latest cartoon.

Bell suggested that the Guardian subscribed to “some mysterious editorial line” about anti-Semitism which blocked the publication of his sketch that portrayed Israeli Prime Minister Benjamin Netanyahu in a negative light.

In the sketch Labour deputy leader Tom Watson is depicted as an “antisemite finder general”, which is a reference to medieval witch-hunters in comics and legends.

Watson calls Netanyahu an “antisemitic trope”, and says that he would be “pursued to the end of the earth and beyond.”

The final sketch shows Watson ending his pursuit of Netenyahu, Trump and Johnson and apologising for his zeal to hunt them down as they are not members of the Labour Party.

In his email questioning the Guardian’s decision not to publish the sketch Bell said: “After our bizarre telephone conversation yesterday, I feared you might not publish today’s strip.”

The email, which was copied in to every journalist on the paper, added: “You said the ‘lawyers are concerned’ but about what? It’s not antisemitic nor is it libellous, even though it includes a caricature of Benjamin Netanyahu.

If Watson chose to object he would make himself far sillier than he does in the cartoon.”

Bell went on to describe the Guardian’s decision as being “more worrying than the specious charges of antisemitism” before rhetorically asking if “the Guardian no longer tolerate content that runs counter to its editorial line?” 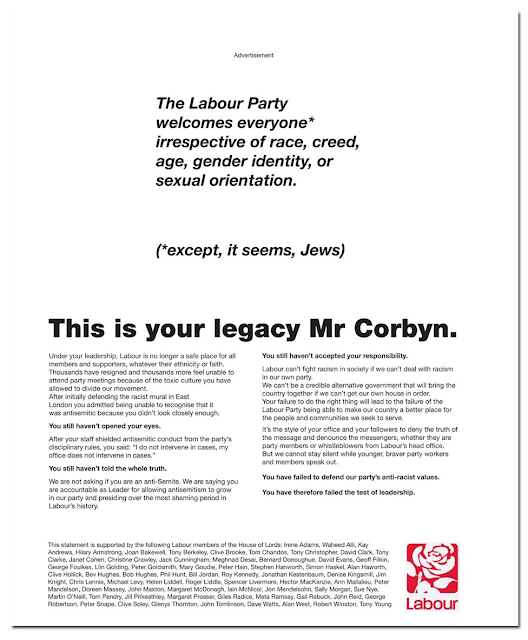 He went on to attack the Guardian for publishing an advert taken out by Labour peers attacking Corbyn over anti-Semitism claims, as “personally insulting (to the leader of the Labour Party)” which used the Labour Party logo.

Bell pointed out that there were more reasons to expect a legal challenge over the anti-Corbyn add than his cartoon.

In his list of grievances Bell also asked the Guardian’s editors why they unpublished a letter signed by 100 prominent Jews, including Noam Chomsky in support of Labour leadership on anti-Semitism.

“Were they the wrong kind of Jews?” asked Bell.

“The papers contortions on this subject do not do it any credit,” complained Bell before requesting to know “if there is a reasoned position on this highly contentious issue.”

He concludes by asking if there are “some subjects we just can’t touch,” which seems to suggest that Bell feels that the topic of Israel and anti-Semitism does not get the honest and fair coverage expected of a so-called progressive newspaper over fears of being labelled racist.

It is not the first time the Guardian has decided not to publish Bell’s cartoons depicting Netanyahu in a negative manner. 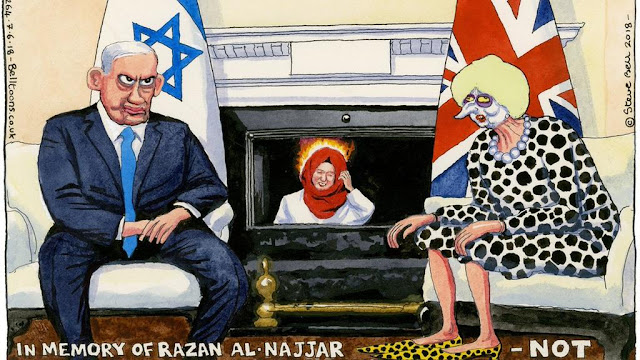 Last June he said he was “unfairly traduced and censored” after the paper would not run his cartoon of Theresa May meeting the Israeli Prime Minister while Palestinian Razan Al-Najjar, who had been shot and killed by an Israeli soldier, burned in the fireplace behind.

It’s reported that he had accused Guardian Editor Kath Viner of not speaking to him because she “did not really have an argument” for spiking the cartoon.
Published by Bado at 12:00 AM