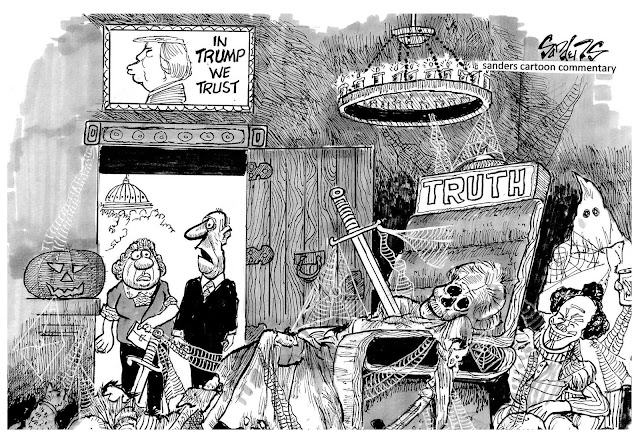 Sanders was a thorn in the side of politicians locally, especially Milwaukee Mayor Henry Maier, but presidents from Richard Nixon to Donald Trump also felt the heat from his pen.
"He was a larger-than-life figure in the history of political cartooning in Milwaukee," said Stuart Carlson, who was a cartoonist at The Milwaukee Sentinel beginning in 1983.

Despite working at the rival paper, Carlson said Sanders would act as a mentor.

"He could have been a lot rougher on me than he was," Carlson said. "I think he loved the ungentlemanly art of political cartoon more than he valued his own position at the paper. He was very generous to me and to other aspiring cartoonists as well."

Sanders began his cartooning career at Pacific Stars and Stripes while he served in the Army in Korea from 1955 to 1957; he freelanced in Japan until 1958.

He returned to the United States in 1959 and began working at the Greensboro Daily News in North Carolina.

He moved to the Kansas City Star in 1963, where he created so much controversy that the paper received more letters to the editor in one month than the paper had received in five years over cartoons, according to an Editor & Publisher article in 1964.
From there, Sanders moved to The Milwaukee Journal, where he was a cartoonist from 1967 to 1991. Sanders' habit of attracting letters to the editor followed him to Milwaukee.

"The editorial page was never void of letters to the editor," said Gary Markstein, who became The Milwaukee Journal's political cartoonist after Sanders retired.
"Those are the qualities of an excellent cartoonist. If you could stir them up, that means people are listening to you."

Sanders was at the center of a fairly contentious relationship between The Journal and Mayor Maier.
"There was nothing subtle about a Bill Sanders political cartoon," said Pat Graham, who was a metro reporter at The Journal at that time.
"His approach was to hit his target right across the nose. And if that didn’t do anything he would hit him again right across the nose."

Markstein said that one time Maier called Sanders a “Colonel," so the cartoonist responded by showing up to a press conference dressed as a Kentucky Colonel, carrying a chicken bucket containing his sketchpad.

"I think he did it just to rile Henry Maier up," Markstein said. "He was not short of any controversy."
"Daddy had such a sense of humor," his daughter Cheryl Connell recalled.

She said that one time Sanders was invited to a tennis tournament where the attendees were all asked to wear white tennis clothing.

"He thought that was so chi-chi, so he bought a white tennis outfit and dyed it black," Connell said.

He was also known as kind and caring.

"I remember him for his personal warmth," said Carl Schwartz, who was an intern in 1969, and later became a top editor at The Journal and later the Journal Sentinel.

"He invited all of us interns out to his place for a Sunday afternoon picnic to his cottage at some lake in Waukesha County.
He invited everybody out there to watch the first moon landing," Schwartz said. "He was just a genuinely warm guy, with a lot of southern charm." 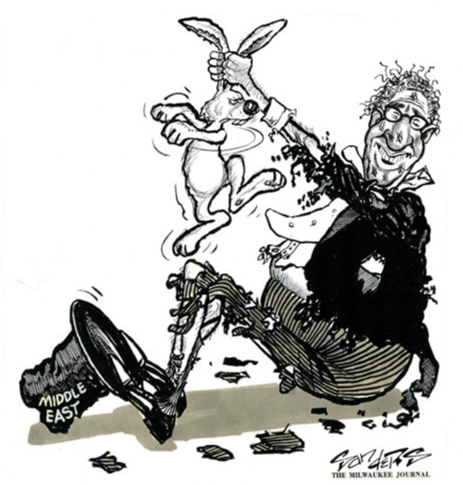 Sanders was born on October 14, 1930 in Springfield, Tennessee.
His family moved to Florida, and he spent a lot of time with his grandparents as his own parents struggled through the Great Depression.

He won a scholarship to play quarterback at Western Kentucky University, where he met his future wife, Joyce. They were married for 66 years and had four daughters.

"He loved my mother, and my mother was his rock," said Bill's youngest daughter, Denese Sanders.
"My father could not possibly have been the person he was without who she was. He was always the one in the spotlight, but she is such a hero to us girls, and to him."

Denese said while growing up that her father instilled in them a sense of independence and critical thinking.
"We had what we called current events nights. He would ask us girls if we knew anything about what was going on in the world," Denese said.
"I was younger, and didn't know much at the time, but my sisters would argue with my dad. It made us all grow and be aware of what is happening in the world."

Denese said she became closer with her father once she grew older and was the one daughter who took up a career in art. In 2016, she put on an exhibit of his political cartoons from previous decades.

"We have archives from the '60s to present day because he continued to draw cartoons," Denese said.
"It's amazing to see how much history has repeated itself. Art changes lives, and it can reach a universal humanity that words can’t always meet," she said.

When Sanders wasn't drawing cartoons, he was playing music in a local bluegrass band. He taught himself how to play the piano, banjo, harmonica and he would sing.

Sanders wrote a memoir in 2018, "Against the Grain." The book talks about his years as a political cartoonist and growing up in the South, where his grandparents taught him to be anti-racist during the Jim Crow era.

Sanders is survived by his wife, four daughters and 11 grandchildren.