"Free Speech: And Why You Should Give a Damn" Zoom Talk

From The Free Library. 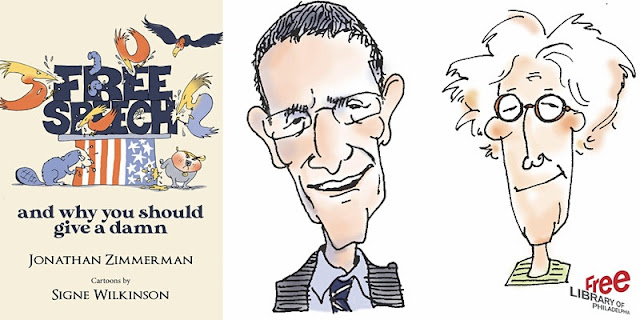 In conversation with Bob Mankoff, cartoonist, cartoon and humor editor for Esquire, and former cartoon editor, The New Yorker.
Across the political spectrum, throughout history, the U.S. public has demanded the suppression of ideas and images that allegedly threaten our nation.
However, the biggest danger comes not from speech but from censorship. In their new book, Jonathan Zimmerman and Signe Wilkinson chart the history of free speech in the U.S. and argue for its renewed importance amidst contemporary challenges to the First Amendment.

Jonathan Zimmerman is the Judy and Howard Berkowitz Professor in Education at the University of Pennsylvania and a leading scholar on the ways in which schools and universities address controversial topics such as free speech, sex, and religion.

Signe Wilkinson is a widely syndicated cartoonist and the first woman to win the Pulitzer Prize for Editorial Cartooning., Formerly based at The Philadelphia Inquirer, she is the recipient of three Overseas Press Club Awards, and two Robert F. Kennedy Journalism Awards for Cartooning.
VIRTUAL - Jonathan Zimmerman and Signe Wilkinson
Free Speech: And Why You Should Give a Damn
Thu, April 1, 2021 7:30 p.m.
Free
Register here
Published by Bado at 8:38 AM