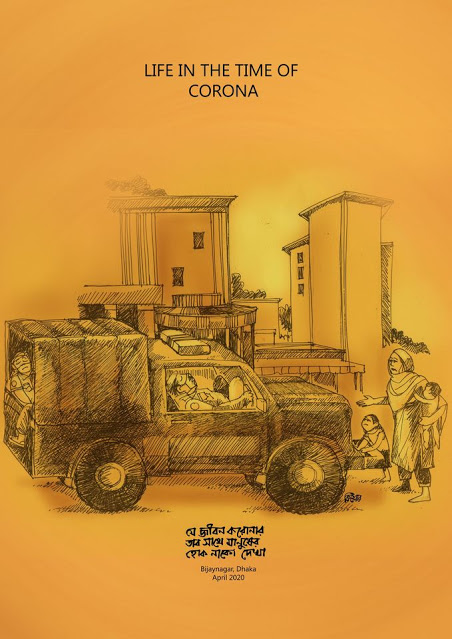 In the wake of the death in custody of Bangladeshi writer Mushtaq Ahmed last week, PEN America is deeply concerned about the health and well-being of codefendant cartoonist Ahmed Kabir Kishore, who has reportedly undergone torture in detention at the Kashimpur High Security Prison and whose health is reportedly failing.
Kishore has been behind bars for the past 10 months under the provisions of Bangladesh’s Digital Security Act (DSA) for publishing cartoons that were critical of the government’s response to COVID-19.
Kishore’s bail petitions have been denied six times. While a hearing has been scheduled for Kishore’s most recent bail petition, his health is reportedly deteriorating rapidly.

In response to the situation, Julie Trébault, director of the Artists at Risk Connection (ARC) at PEN America, released the following statement:

“It is horrifying and appalling to realize that Bangladeshi authorities have consigned Ahmed Kabir Kishore to torture and possibly death simply for drawing cartoons. As we mourn the death in custody of writer Mushtaq Ahmed, we genuinely fear that Kishore’s life is in imminent danger.

In what must be treated as a situation of utmost concern and urgency, PEN America calls for Kishore’s immediate release. And because we cannot ignore the fact that he should never have been behind bars to begin with, we call upon the Bangladeshi government to drop all charges against Kishore and against all those whose free expression has been treated as a crime under the country’s Digital Security Act.”

PEN America leads the Artists at Risk Connection (ARC), a program dedicated to assisting imperiled artists and fortifying the field of organizations that support them.
ARC recently released A Safety Guide for Artists, which offers practical tools to help artists navigate risks and features an interview with Bangladeshi photojournalist and activist Shahidul Alam, who discusses his experience in jail and the state of artistic freedom in Bangladesh.
If you or someone you know is an artist at risk, please contact ARC.
UPDATE
We are pleased to learn that Bangladeshi cartoonist Ahmed Kabir Kishore, who has been in jail for almost 10 months, has been released on bail.

His lawyer, Mr. Jyotirmoy Barua announced on Facebook that judges granted him bail on Wednesday, March 3, 2021.
According to articles from the local press, he has been granted bail on the ground “that he has been languishing in jail for a long period and investigation into the case against him is ongoing”.
He is currently still behind bars but his lawyer said he hopes he will be released from jail within two or three days.

The release comes as his co-accused under the controversial Digital Security Act, Mushtaq Ahmed, died in prison last week and the cartoonist revealed he had been tortured in prison.
LATEST UPDATES
Local press is reporting Kishore's release earlier Thursday afternoon.
Ahmed Kabir Kishore has suffered permanent damage to his hearing:
https://www.dhakatribune.com/bangladesh/2021/03/07/kishore-will-need-hearing-aid
His hospital treatment continues.
Ahmed Kabir Kishore has formally entered a complaint against his alleged torturers, heard in a Dhaka court earlier today.
https://m.theindependentbd.com//post/260172
Kishore has been released on bail for six months (though not acquitted) thanks to international outcry and is undergoing medical treatment.
Published by Bado at 2:03 PM