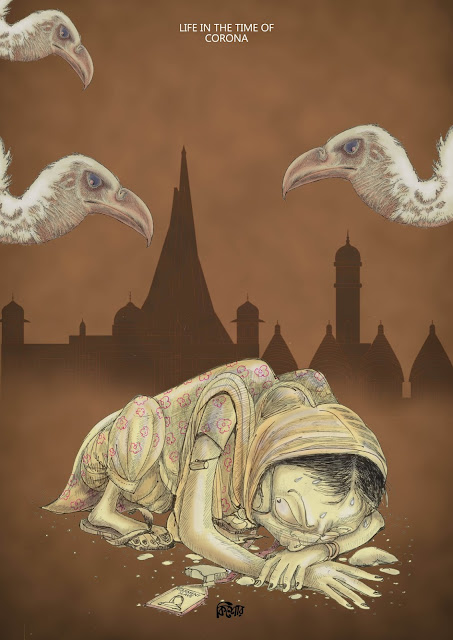 Ahmed is a cartoonist and activist known to CRNI for over a decade.

He campaigned bravely on behalf of the disappeared Sri Lankan cartoonist Prageeth Eknaligoda (2010) and jailed Bangladeshi cartoonist Arifur Rahman (2007) and identified as a CRNI “affiliate leader” in the country, although doing so inevitably led to accusations of aligning with foreign interests.

This speaks to his courage, as do his public demonstrations for the human rights not only of cartoonists but also Hijra people and in defence of health and consumer rights and the Bengali language.

Through April and into May of this year Ahmed posted to Facebook a series of cartoons he entitled “Life in the Time of Corona”, satirising society’s response and critical of the government’s handling of public health during the pandemic.

On May 5th 2020 Ahmed was among several people arrested under the Digital Security Act, 2018 (DSA) by personnel from the Dhaka division of the Rapid Action Battalion (RAB-3), the unit officially deployed against terrorists, drug lords and human traffickers but often accused of being an instrument of government suppression.

Lawyers at the Ain-O-Shalish Kendra (ASK) legal aid organisation have seen the charge sheet and tell us that Ahmed is alleged to have taken part in a “conspiracy, spreading rumours and misinformation against the prime minister Sheikh Hasina and her late father, Sheikh Mujibur Rahman.”

Ahmed is alleged to be an administrator on a Facebook page called “I am Bangladeshi”, which is considered as the main subject of investigation by the authorities.

In the ensuing months of detention Ahmed has been denied a bail hearing on three occasions (May 17th, June 16th and July 23rd) and subjected to periods of what’s described as “jail gate interrogation”, this despite the ongoing and imminent threat to prison populations posed by corona virus COVID-19 and the release of literally thousands of criminally prosecuted people from jail in Bangladesh for precisely that reason.

Ahmed is an insulin-dependent diabetic, meaning he should be afforded some extra protection from infection. 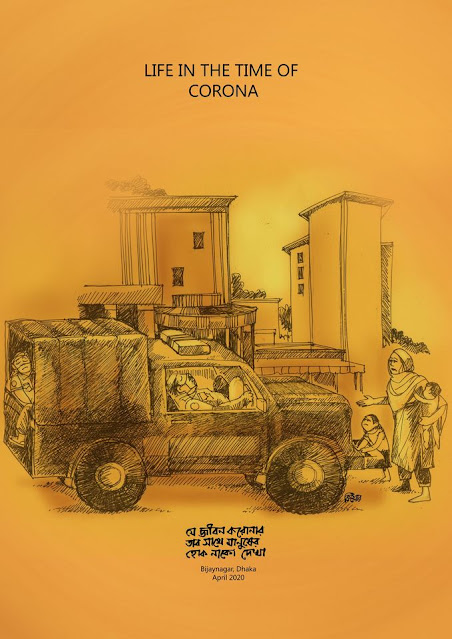 CRNI has petitioned the prime minister on Ahmed’s behalf along with ASK, Cartooning For Peace, Forum for Freedom of Expression, Bangladesh (FExB) and Reporters Without Borders.

Our request for clemency has been ignored.

The intent of the Robert Russell Courage in Cartooning Award is to recognise the plight of a cartoonist experiencing a human rights violation – and in our view that is precisely what has happened to Ahmed, several times over – as well as raise their profile in the hope that doing so will help bring about a favourable resolution. 2020 has been an extraordinarily, exceptionally bad year.

We could have presented the “Robert Russell” to European cartoonists whose censure was requested by Chinese diplomats, to a Jordanian cartoonist arrested for caricaturing the crown prince of the UAE, Brazilian cartoonists harassed by law enforcement, an Algerian cartoonist detained for “disrespecting” the military or a Palestinian cartoonist subjected to mass internet trolling and death threats over a cartoon to which Saudi Arabians took offence.

Circumstances have been so bad that we were forced to make an emergency statement in the spring, warning that lasting and potentially irreparable damage would be done to the global community of cartoonists in 2020, due in large part to the license the pandemic has granted to authoritarian regimes.

Therefore Ahmed Kabir Kishore's case is emblematic of the times in which we live; his freedom to express scepticism and dissent has been violated and that in itself would be sufficient to attract our attention, but for the last six months his life has been needlessly put at risk by detention in jail – universally recognised as an environment where coronavirus is a higher risk – despite his health condition – again, universally recognised as a contributing factor to illnesses such as COVID-19.

In presenting the Robert Russell Courage in Cartooning Award 2020 to Ahmed Kabir Kishore we call for his immediate release, his total exoneration of all criminal charges and an independent investigation into his treatment while a detainee.