The American Bystander at 18 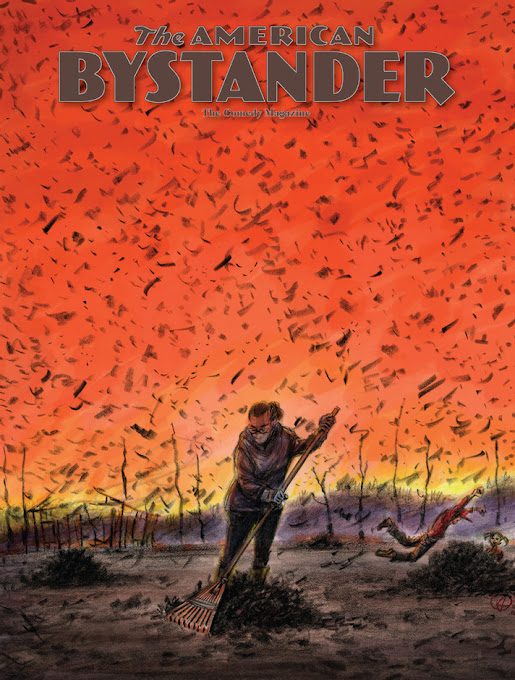 When in 2015, Trump was just an annoying little gnat, Michael Gerber knew that humor would be a saving grace in a demonic moment of history & unveiled The American Bystander, the first new national humor magazine in 30 years.
I can hear the voice of the masses now: "Does the world need a humor magazine?"
The answer is obvious: "Maybe!" If there are enough people seeking a good laugh, a controversial thought or a satisfying snark, then a humor mag is just what the doctor ordered.
On the other hand, it can be argued that during the Trump Epoch we dipped into all our reserves to stay sane, so perhaps a humor magazine is today simply an indulgence.

In October 2015, when Trump was just an annoying little gnat, how did Michael Gerber know that humor would be a saving grace in a demonic moment of history?
He just wanted to rekindle the old traditions for their own sakes.
So, a bunch of genial weirdos unveiled The American Bystander, the first new national humor magazine in 30 years. (The magazine was originally conceived in the early 1980s by Brian McConnachie, but never produced.)
Gerber and his witmates wanted to create a place for print humor in the 21st century; in a dumbness-forward era, they sought to present, if not an antidote, at least an alternative.

It's time to look back on how it did, and is doing. I asked Gerber a few serious questions about humor in the 21st century. This bit of quiet is a good moment to get some interesting responses.

You started The American Bystander with limited funds and a whole lot of passion. I see the passion is still there, but how did you manage to produce 18 issues?

The short answer is, "The contributors." Everything good comes down to the 300+ amazing people who have contributed their stuff in exchange for agonizingly small checks. (I agonize. They are great about it.)

I've been practicing this magic trick since I was 18, so at 51 I am extremely wily.
I use ancient versions of InDesign and Photoshop that do exactly what I want them to (and very little else); I have a typography-driven, pre-Photoshop design that allows me to generate pages quickly and easily; I have a stable of people who write in certain ways, which I can predict; I have a carefully calibrated format that builds in a lot of flexibility and diversity, just by my filling it.
Plus, I work on this thing incessantly. I just went to the eye doctor and she gave me a stern talking-to.

The whole Bystander package, from design to content to production/fulfillment, is the result of many years of trial and error.
We are breaking new ground in the field of one guy sitting in his living room, opening emails from the funniest writers and cartoonists in the world. I am weary but grateful!

...
Who are the stalwarts in your comedy stable? And why do they hold up so well?

Cartoonists and illustrators are the glue that holds Bystander together, and they create their own world.
M.K. Brown; Sam Gross; John Cuneo; Roz Chast; Ron Barrett—there are so many, each fantastic.
Our one-panel people are amazing—there are too many to list, and it's a diverse crowd; men and women, young and old.

Our writers fall into one of two buckets: the absurdist type, and the personal type.

For the absurdists, we have Brian McConnachie, of course, who founded Bystander back in 1982.
And Jack Handey—there's practically a whole "School of Handey" among writers under 40. There's Steve Young. P.S. Mueller. Lars Kenseth. And so forth.
We launched a whole website specializing in this absurdist type, which is run by two great young writers, Adam Chase and Ben Doyle.

A few can pull off more typical political satire—consummate pros like Barry Blitt, Steve Brodner, Rick Meyerowitz and Larry Doyle.
Their stylistic control is so precise they can survive in a world where the narrative changes every three hours.
...

You have some plans for the future. Care to share?

In addition to Bystander appearing four to five times a year, and our daily website twofiftyone.net, I'm developing a MAD-like print magazine with MAD's ex–editor-in-chief, Bill Morrison; we're also planning a Bystander podcast, produced/engineered by Bob Tischler from The National Lampoon Radio Hour.
I just got off the phone with Bob! I'm really excited.
The full article can be read here.
Published by Bado at 12:00 AM