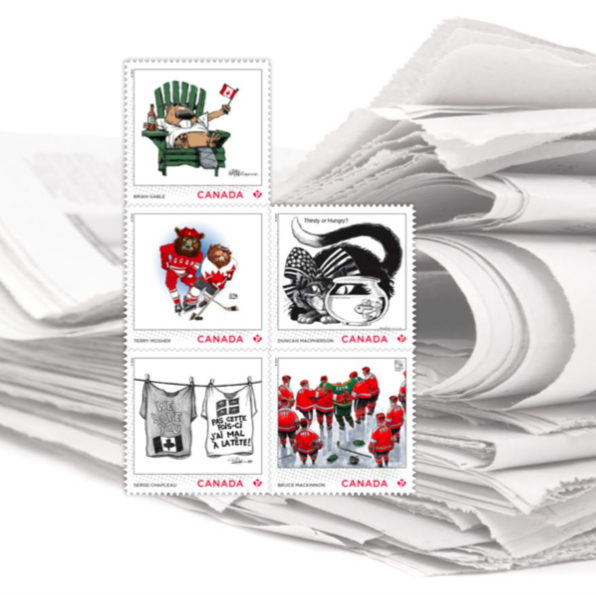 Canada Post will pay tribute to five legendary editorial cartoonists this week through a special stamp issue.
Over the next week, Canada Post will unveil five stamps that celebrate five of Canada'sgreatest editorial cartoonists, whose thought-provoking and seminal work has helped shape our national fabric over the last half-century.
Videos and stories will be shared with each unveiling, with a special online roundtable discussion with the artists planned for Friday, October 8.
The five award-winning cartoonists, each honoured with their own stamp, are some of our country's best journalists and storytellers. Their powerful drawings have been important fixtures in some of Canada's most prominent and influential newspapers for decades.

Armed with pencils, ink and razor-sharp wit, these editorial cartoonists have boiled down complex issues into a single image – providing pointed commentary on important domestic and world events.
Challenging the status quo and tackling controversial subjects head-on, their work has transcended politics and played an important role in upholding Canadian democratic freedoms.

These talented Canadian artists have made us laugh, reflect and cry with cartoons that tap into the emotions of a country. Their combination of humour and art have enlightened and entertained us, contributed to national debate, and brought attention to unfairness and injustice.

Canada Post is proud to honour the enormous contributions to Canadian media and society of these editorial cartoonists:

Monday, October 4: Serge Chapleau of La Presse is a winner of eight National Newspaper Awards and a Member of the Order of Canada.
An annual collection of his best caricatures has been published every year since 1993. In 2004, his popular puppet character Gérard D. Laflaque was brought to life on the television satire Et Dieu créa…Laflaque.

Tuesday, October 5: Brian Gable of The Globe and Mail is a winner of seven National Newspaper Awards and a Member of the Order of Canada, whose citation said his work "embodies our national sense of humour, namely our ability to laugh at ourselves and our institutions."

Wednesday, October 6: Terry Mosher of the Montreal Gazette is best known by his pen name, Aislin. Over the last half-century, Mosher has drawn more than 14,000 cartoons, which have appeared around the world.
He is an Officer of the Order of Canada and has won two National Newspaper Awards and a gold National Magazine Award. At 78, he is both a historian and an elder statesman of the craft in Canada; one of Mosher's more than 50 books is about Duncan Macpherson's career and influence.

Thursday, October 7: Duncan Macpherson (1924-93), of the Toronto Star, one of the most influential cartoonists in Canada. The first editorial cartoonist to be invested into the Order of Canada, and winner of six National Newspaper Awards, he drew witty cartoons for three decades, challenging what he called "wrongness" on behalf of everyday Canadians.
He also successfully pushed for independence from the editorial stance of his own newspaper, thereby changing the role for the editorial cartoonists who followed.

Friday, October 8: Bruce MacKinnon of The Chronicle Herald (Halifax), who has won 21 Atlantic Journalism Awards, six National Newspaper Awards for editorial cartooning (and a seventh, the inaugural Journalist of the Year award) and the World Press Freedom International Editorial Cartoon Competition. His citation as a Member of the Order of Canadacalled him "one of Canada's most skilled, empathetic and provocative editorial cartoonists.

A live panel discussion with the cartoonists and Ian Macpherson, Duncan's son, will be held online on October 8 at 11 am, ET.
Register for the webcast here.
It will be moderated by Anthony Wilson-Smith, President and CEO of Historica Canada and Chair of the Canada Post Stamp Advisory Committee.
Published by Bado at 12:00 AM