It began as something its creator had no real fondness for. Even to this day, the man behind the artwork feels no special attachment to it. It was a bit of a toss-off that he tossed in.

Peter Steiner was creating his cartoon submissions for the following week’s New Yorker magazine. “Sometimes, when I couldn't come up with something, I doodled — doing a drawing and then trying to invent a caption to go with the drawing, like the New Yorker caption contest … ,” Steiner tells Comic Riffs. “I submitted it without thinking it was even the best cartoon in the batch.”

Twenty years ago this month, though, the New Yorker’s Cartoon Editor, Bob Mankoff, chose it as being among the best from all the cartoonists’ batches he received that week.

Rarely have cartoon dogs had such cultural “legs.”

Today, it remains the most reproduced cartoon in New Yorker history.

The famed pen-and-ink artwork, if you haven’t already guessed, features two dogs at a desk, one of them sitting before a computer screen. Speaking knowingly to his companion, one canine utters a quick caption of eight deceptively prescient words:

“On the Internet, nobody knows you’re a dog.”

The humor resonates in hindsight. But at the time, the cartoon didn’t catch fire right away.

“When Peter did his ‘On the Internet, nobody knows you're a dog’ cartoon back in July of 1993, the Internet was pretty much terra incognita for most people,” Mankoff tells Comic Riffs, “and Netscape, the first really popular browser for the masses, was still over a year away from its debut.”

Steiner didn’t intend it to be some profound commentary on the burgeoning World Wide Web.

“I wasn't interested in the Internet, exactly,” the cartoonist tells Comic Riffs, “but I did subscribe to an online service early on, more out of curiosity than anything else. I soon let the subscription lapse.”

Sometimes a cartoonist’s timing is all about the turn of a phrase, the just-right strike of a rhythm. In this case, though, the timing was also about an era’s longer arc — a factor not measured in syllables, but years.“The cartoon, while topical, was a little bit ahead of its time,” Mankoff tells Comic Riffs. “A few years later, it was completely of its time, as the World Wide Web wove itself into our lives and our pocketbooks. But earning our trust was another matter.

“The cartoon resonated with our wariness about the facile façade that could be thrown up by anyone with a rudimentary knowledge of html.”

The artwork began to be cited by leading tech figures, and by 1995, that wariness was reflected in Alan David Perkins’s play, “Nobody Knows I’m a Dog.” Steiner’s caption was entering the wider culture.

The artist’s work also benefitted from the launch, under Mankoff, of the magazine’s digital Cartoon Bank. The Internet itself was rising to popularize one of the earliest great cartoons about the Internet.

“The Cartoon Bank undoubtedly contributed to its afterlife,” Steiner says of the cartoon. “And of course, so did the Internet, which is a bit ironic. After all, the Internet dog cartoon may be an Internet dog.

(The Cartoon Bank also monetizes its creators’ works, providing a fiscal cartoon afterlife. “I'm told it's made me over $50,000,” Steiner tells ‘Riffs. “But it has come in spread over 20 years, so it has never felt like the pile of money it is.”)

The Internet era also quickened the pace with which the cartoon could become the magazine’s most reproduced ever — a milestone that astonishes the artist still.

“I don't know why it continues to be reproduced,” Steiner says. “By now, everyone must have seen it. But of course, I'm pleased.”

Despite being its creator, Steiner surveys the cartoon with a certain distance. “It still looks to me like one of my cartoons from a long-ago era and not much more,” he says. “I know it's famous, but I don't feel any connection to that part of it. I recognize that it's a pretty good cartoon, but it's not my favorite one by any means. …

“It's embarrassing, but I've never quite understood what all the fuss was about.”

“It endures now, partly out of nostalgia, and partly because that wariness never completely went away,” Mankoff says. “The Internet and it’s evolutionary offshoots like Twitter still have the potential for deception and Danger. Just ask Carlos.”

Steiner acknowledges that the cartoon, upon its 20th anniversary, remains just as relevant — yet in 2013, the resonance is magnified.

“It's as true as it ever was,” Steiner tells us. “ But the Internet is so ubiquitous, so ever-present in our lives now, that unlike a dog here or a dog there, it's become like a huge, baying pack of hounds that won't ever shut up.”

Today, as a cartoonist, Steiner says he has “hung up my nibs and brushes for the most part. Now, I write novels and paint pictures.”

And what if “Nobody Knows You’re a Dog” remains how much of the world knows that Steiner’s an artist. What if, in terms of creative legacy, this cartoon’s caption is effectively the headline on his obit?

“I confess to feeling a bit chagrined at the thought that this cartoon it what I am known for — to the extent that I'm known — and will, if I'm given an obit, be the reason for it, and may be seen by others as the high point of my life,” says Steiner, before spinning wry.

“I don't see it that way, but fortunately, I won't have to read my obit.”

A few of my favourite Steiner cartoons: 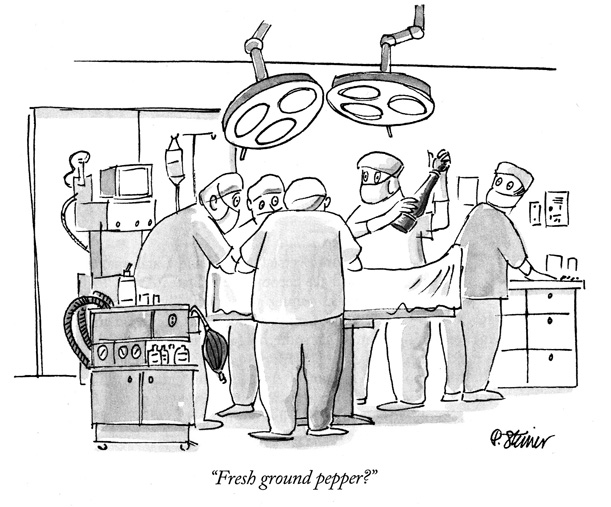 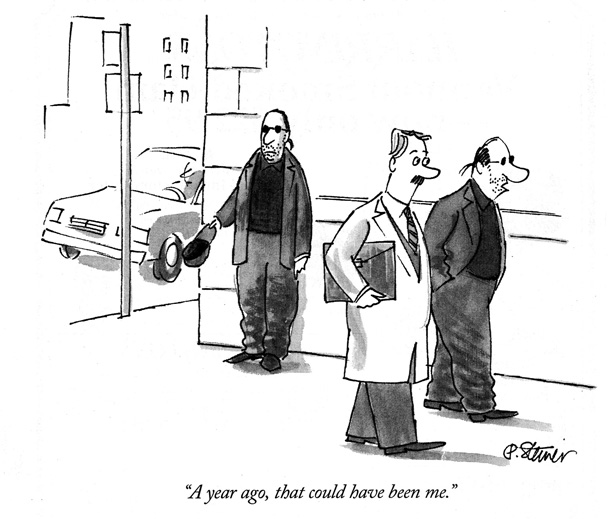