Duncan Macpherson, "Giant of the North"


25 years after his death, Duncan Macpherson racks up another honour this weekend as he is inducted in the Doug Wright Hall of Fame, "The Giants of the North", cartoonist Terry Mosher writes.

Duncan Macpherson, Canada’s most celebrated political cartoonist, died 25 years ago this month. He and I first met in 1971 during the FLQ trials.

“Dunc” was in Montreal doing courtroom sketches for the Toronto Star; I was doing the same for the Montreal Star.

At the end of one session, several of us piled into a cab headed down to the Montreal Press Club.

Crime reporter Paul Dubois, a character in his own right, introduced us. “Duncan,” said Paul mischievously, “I’d like you to meet our new guy, Aislin.”

“Well, well, well,” said Macpherson in that surprisingly high-pitched voice of his.

“Can I buy you a drink?” A dozen brandies later, I was under the table.

Macpherson leaned down and said to me, “Get a haircut, punk!” (My hair was a little longer then.)

From that point onward, whenever I was in Toronto through the ’70s and early ’80s, I’d get together with Duncan, usually at Toronto’s Press Club.

In essence, he became my professional mentor. Mind you, Macpherson could be a pain in the butt when he drank: heavy-handed, arrogant and a troublemaker.

He openly acknowledged these tendencies, but insisted I was even worse.

After I quit drinking in the 1980s, I never saw Duncan again. He also stopped drinking not long after I did and lived a quiet life with his wife, Dorothy, in Beaverton, Ont., until he passed away.

Macpherson was born in Toronto in 1924. He joined the RCAF in ’41 and served in England, where he familiarized himself with British political cartooning.

After the war, he studied graphic arts, first at the Boston Museum of Fine Arts and then at the Ontario College of Art, graduating in 1951.

He very quickly became a first-rate illustrator for a number of magazines.

Pierre Berton was then managing editor at Maclean’s, but when he moved to the Toronto Star in 1958, he talked Macpherson into trying his hand at political cartooning for the newspaper’s editorial page.

Duncan’s success was instantaneous. His portrayals of the glad-handers, puppets and sketchy characters to be found in municipal, provincial, federal and international politics were enormously popular with the Star’s readers.

Before Macpherson came on the scene, Canadian cartoonists’ styles were influenced by the fashion south of the border. Macpherson’s brushwork was bold, inventive and unique, a new direction for cartooning in English Canada.

He was the first to hire an agent to negotiate his salary. (He helped me do the same shortly after we met.)

Being apolitical, he insisted on having the freedom to express his 360-degree vision by striking out at the right, the left and the centre — or whoever else attracted his attention.

He did this without confining himself to the editorial viewpoint of the Star.

Recognizing his popularity, the newspaper was extremely accommodating, even putting up with the occasional mischief — like the time he went to the lobby and painted moustaches on the portraits of former Star potentates!

Duncan also got to satisfy his wanderlust, setting out on occasion to see the rest of Canada and the world. 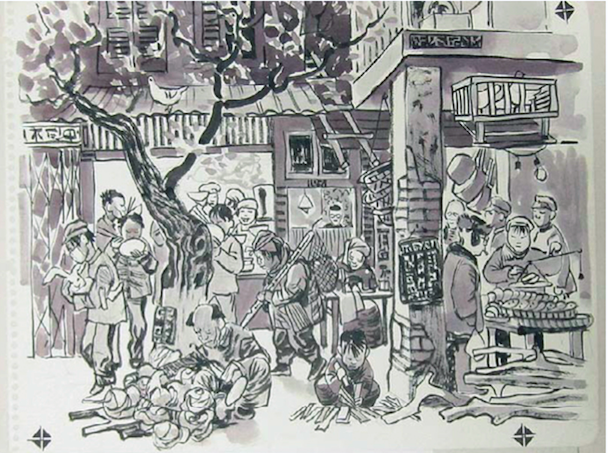