Cartooning for a Sustainable Future 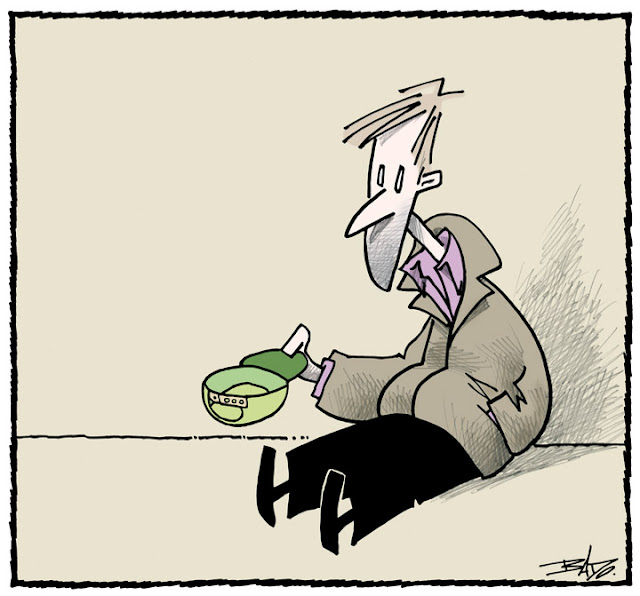 Will editorial cartoonists find their (paid) place on the web?

Dan Perkins, better known as Tom Tomorrow, has been creating the popular This Modern World comic strip for over two decades. For much of that time his publishing “homebase” was Salon.com, but as its comic section dwindled, he began “quietly looking around for alternatives” in 2010. “I had exploratory conversations with many of the big political sites,” says Perkins, “and couldn’t seem to interest anyone.”

That changed this past April when Markos Moulitsas, the founder of Daily Kos, hired Perkins to edit the site’s new political cartoon page. Perkins has used this opportunity to implement some standards he’s felt lacking elsewhere, like paying cartoonists (“that was an important precedent to establish”) and offering year-long contracts to the nine contributors they’ve signed so far (“I think artists deserve regular followings”).

Moulitsas wrote in an e-mail that some of the “biggest social media shares at the site have been cartoons,” and an embeddable widget is in the works so other sites can highlight the Daily Kos cartoons. Perkins says they hope the widget will encourage people to “do the right thing,” i.e. “post with attribution and a link back to the source.”

Cartoons pass quickly around the web. Most cartoonists I spoke with said they’ve never had so many people viewing their work. But popularity doesn’t necessarily pay. Traditionally, cartoonists have had two main paths to solvency: staff jobs—which have been on the verge of extinction for years—and syndication. Syndication companies sell the rights to an artist’s work to publishers in a variety of ways.

Individual artists are sometimes offered a la carte (which is most lucrative for the cartoonist), or as part of a package deal that includes the work of many artists. In recent years, individual artists are increasingly being bundled into packages at a discount rate. Using syndication packages and bundles, publishers can have a buffet of cartoons to choose from.

Syndication remains the way most newspapers, their accompanying websites, and other online news outlets obtain cartoon content. But the pay for the artists is decreasing, as found in a recent report from the Herb Block Foundation, entitled, “The Golden Age for Editorial Cartoonists at the Nation’s Newspapers is Over”:

Couple that with fewer newspaper clients, and it’s a significant pay cut. Cartoonist Ted Rall, who’s done freelance work for the Columbia Journalism Review, is syndicated through Universal Press Syndicate, and says each time one of his cartoons is run in a newspaper he earns, on average, about $3.50.

But he’s down from about 140 newspapers at his peak, to 45. “Now, I earn 16 percent of what I earned from syndication 12 years ago, when I was less well known,” says Rall. And while some online sites have become new customers for syndicates, the new business doesn’t make up for that which was lost.

Rall says his work has run in Slate, which he describes as a “great place to be,” but one month he calculated what he made from their purchase of his work for a roundup, and discovered “I made 8 cents from one of those cartoons.” He explains: “They get it through the syndicate, and it’s sold through part of the package, and the syndicate pays the artists a laughably low percentage of the laughably low rate.”
The Herb Block Report asked members of the American Association of Editorial Cartoonists a survey question about syndication; more than half of the respondents reported earning income from syndication, and while 18 percent said they earn more than half their income through syndication, more than a third of the respondents said they earned less than 20 percent of their living from this type of work.
Some of the major syndicates include Universal Uclick, King Features, The Washington Post Writers Group, Creators Syndicate, and the Cagle Post. The Washington Post Writer’s Group was one of the few syndicates to respond to an interview request from CJR, and Amy Lago, the comics editor, says in the competitive syndicate market, it’s not easy to increase fees on newspapers.

“Typically they’ll come back and say, ‘not only can I not afford your rate increase, but my circulation has dropped,’” says Lago, which usually means a lower rate request based on their now-decreased circulation. She says for a number of years they did not propose an annual increase, but decided to up it an “insignificant amount” in 2011 and 2012 (she says by one or two percent).

“We know what newspapers are up against financially, and we’ve been wanting to support them,” says Lago. Business clients are made up almost entirely of newspapers, and while they do have some websites that subscribe, “they tend to pay very little because they don’t really have the budgets,” says Lago.
The Cagle Post is run by cartoonist Daryl Cagle, and he said the same about his business: “We make our living from print. That’s still the culture of people that pay their bills.” He started Cagle Post in late 2000, and was inspired by his own frustration with trying to sell his work, both through a syndicate and on his own. Now, about 850 newspapers—about half the newspapers in the United States—either subscribe to Cagle Post or have opted to pay per use.

He says individual cartoonists have been losing out to syndicate pricing for decades now. “It was 30 years ago that prices got driven down,” says Cagle, and finds that packages are what most news organizations are interested in. “I would love for people to just buy my cartoons, but the best way to do this is work with other cartoonists.”
The proprietors of YubaNet, a two-person news operation covering California’s Sierra region, count a subscription to Cagle Post as one of their most important investments. Pascale Fusshoeller, the site’s editor, says that the cartoon section draws consistently high traffic numbers “every single day.” “If the cartoons aren’t up by 7 am, I get e-mails or calls like, ‘Hey, there is no cartoon today,’” says Fusshoeller. “Some people are very attached. They start their day with these cartoons.”

Other cartoonists choose to self-syndicate rather than sign with a third party. Mark Fiore, who won a Pulitzer in 2010 for his animated political cartoons, says he was syndicated with Universal Uclick for a few years, but felt “they’re no better at it than I am.” Instead, he chose to “pound the pavement” to sell his own work. Now, he collects advertising revenue from his website and his YouTube channel. “In a way, YouTube is a syndicate for me; they are selling the ads, and getting my work out there.”

There’s no way to undercut syndicates, says Fiore, “unless your selling it for pennies,” so cartoonists have to find a way to offer something unique from what the syndicates offer. “The syndicates are cartooning’s best friends and worst enemy,” says Fiore, but to break free from that, “You’ve got to figure out the hustle.”

Tom Meyer worked self-syndication into his survival strategy after accepting a buyout from the San Francisco Chronicle in 2009. Rather than doing locally focused pieces, like he often did for the Chronicle, he started focusing on topics that would interest a California-wide audience so he could sell them around the state.

“I have to be really conscious of the stories I’m commenting on. I can’t really do something about the San Francisco mayoral race because that’s not something my LA readers will care about,” says Meyer.

One of the sites that’s purchasing Meyer’s cartoons is California political news and opinion site Calbuzz. Phil Trounstine, former political editor of the San Jose Mercury News and co-founder of Calbuzz, says the cartoons enrich the site, and are an affordable investment. “You can say things with a cartoon that would take you a very long time to write, so it’s space well used,” says Trounstine.

Editing Daily Kos’s cartoon section is only one of the many ways in which Dan Perkins makes his living. Perkins says he started self-syndicating because “it was initially the only option,” but once he had “established a substantial client list, there was no real reason to split my income with a syndicate.”

He also prefers this method because it affords him a measure of control; he can decide where his cartoons appear and how much he charges for them. And he has the independence of being his own boss. “I get a lot of checks every week, for like ten or twenty dollars. You get enough of those, you make a living,” says Perkins.

Matt Bors is one of the artists to recently sign a cartooning contract with Daily Kos. Bors juggles a number of jobs as well; he syndicates his cartoons through Universal Press Syndicate, does freelancing work, along with his duties for a project called the Cartoon Movement.

Bors, 28, runs the project with Tjeerd Royaards, 31, and as younger cartoonists, they can’t reminisce about days when they could make a decent living. “You work three days a week so you can cartoon two days a week,” says Royaards. Their site publishes cartoons from artists all over the world, including from places that wouldn’t come top of mind for this craft, like Malaysia, Nepal, and Sudan. Submissions when Osama Bin Laden was killed were particularly interesting: “You’ll have cartoons from America come in saying this is good, and then, from other places, a message that international justice is important.

Many different perspectives,” says Royaards. (Their tagline is: “There is more than one truth.”) This summer, Cartoon Movement traveled to Haiti to find a Haitian cartoonist and journalists for a series of comics journalism about the country post earthquake. They’ve since published a number of pieces, including a long form piece about the tent camps called Tents behind Tents, and an animated video about increased homophobia in the region, called Haiti’s Scapegoats.

Cartoon Movement pays one hundred and fifty Euro up front for every piece they publish from their member artists, which, at the moment, is one cartoon per day. It’s not a lot, but they see their model as an alternative to traditional syndication, which doesn’t pay unless the cartoon gets sold to a publisher, and takes a cut of the fee.

They also sell the cartoons to other media after purchase, and they have deals with magazines and newspapers around the world. 130 cartoonists have joined the site from over 75 countries, and one of the missions is to foster conversation between these international cartoonists, including discussion about possible revenue models for the digital age.

Their youth could make them uniquely qualified for the task. “[We] are a younger generation of cartoonists, we’re both under 35, we’ve never had staff positions,” says Royaards. “Our experiences as cartoonists have been quite different.”

Bors says opinion page editors at papers have always understood the power of something visual on the page, and he’s hoping web editors start giving cartoons the “same priority they give the written word.”

“I have a big web audience,” says Bors, “and a lot of my cartoons are incredibly popular. They fly around the web more than a lot of articles do, but for whatever reason, cartoons aren’t on the budget.”
Published by Bado at 4:16 PM