Her Maj: 60 Years of Unofficial Portraits of the Queen

The Cartoon Museum celebrates the Diamond Jubilee from February 1 to April 8.

The Cartoon Museum celebrates the Diamond Jubilee with a humorous history of the reign of Queen Elizabeth II. A gallery of royal portraits – affectionate, teasing and at times downright unflattering – shows how Her Majesty’s appearance in cartoons has undergone a striking transformation over the course of her reign. Since the early 1900s it was generally accepted that The Monarch might be referred to in cartoons but almost never depicted, and this Royal taboo remained unbroken right into the 1950s. As the veteran cartoonist Wally Fawkes remembers, ‘At that time there was a much closer link between the Royal Family and God’.

Her Maj follows the Queen as she emerges from near invisibility into cartoons which respectfully echo her official image on coins, stamps and banknotes, often portraying her in profile or from behind. She is pictured in her robes of state, as Elizabeth I or Britannia, but also as ‘Liz’, an ‘ordinary housewife’ in headscarf and sensible shoes.

The 1960s brought a greater emphasis on openness. For better or for worse, the Palace decided to allow the media behind the scenes in the 1969 TV documentary Royal Family. The film inspired cartoonists to imagine what life was really like ‘at home with the Windsors’ in royal residences ankle‐deep with corgis. The ups and downs of family life, her husband’s infamous asides, the difficulties with her children and their spouses, problems with the press – all these provide a rich vein of material for cartoonists, as does the knotty question of the Monarchy and public money.

Many of the works reflect the fact that the Queen embodies not only the Monarchy, but also the State. Her actions can convey an historic significance beyond that of any prime minister. Cartoons can register key moments in international relations, such as the visit by Emperor Hirohito to Buckingham Palace in 1971 or the Royal visit to Ireland in 2011. She appears in cartoons more frequently during periods when the Commonwealth and the Union are under strain.

These ‘unofficial’ portraits, mostly affectionate but sometimes critical, reveal the changing face of Elizabeth II as Sovereign, as symbol and as a wife and mother through her relationships with her family, her governments and her people over the last six decades. 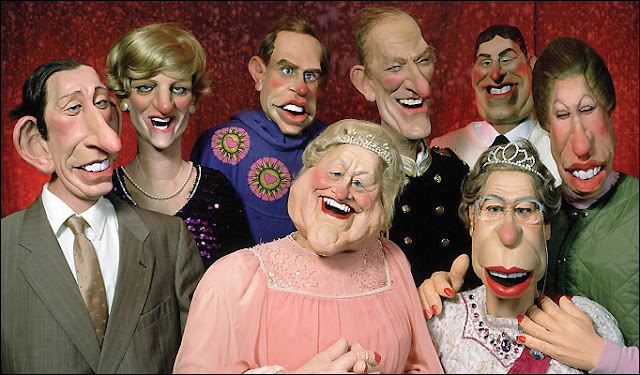