I learned today, in the Globe & Mail, the death of celebrated graphic designer Theo Dimson. 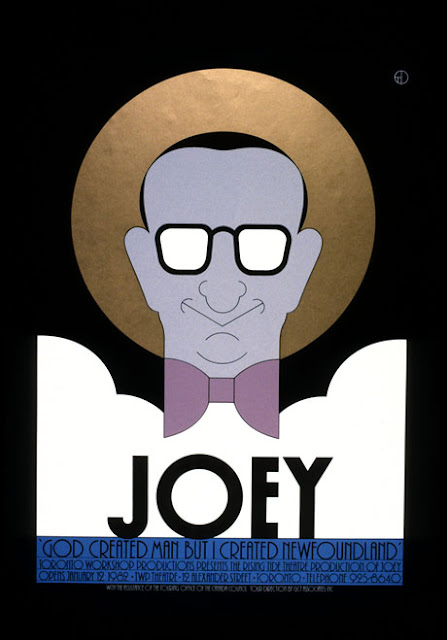 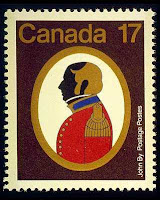 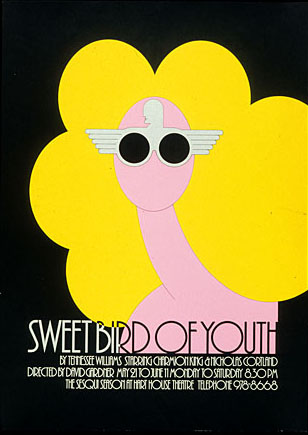 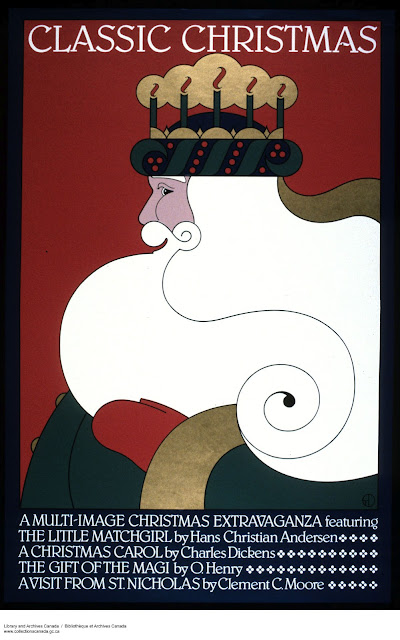 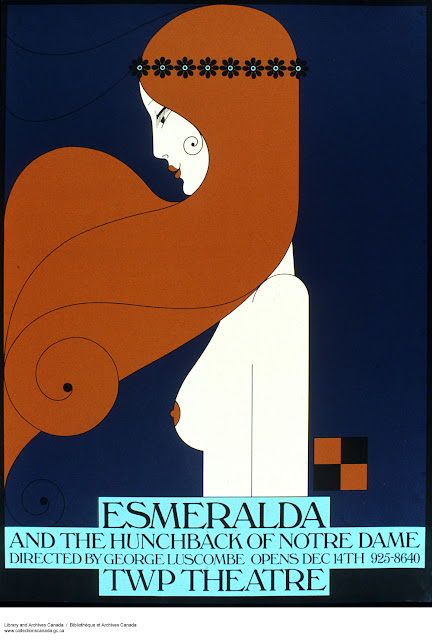 Poster of a man

SUSAN FERRIER MACKAY
Graphic designer Theo Dimson's modus operandi was as dynamic, elegant and creative as the many Art Deco posters and works that epitomized his long career. At age 80, two years before he died, he was asked to name five highlights of his life. He roared "Hell, my whole life has been one gorgeous highlight." He then listed in order: being born, going to the Ontario College of Art, the Bohemian mantra Truth, Freedom, Beauty and Love, "I love love, beginning with Jenny in Grade 1, and loving passionately being a graphic designer for 50 years."
Dimson referred to his profession as "Fun City." His award-winning work was shown both internationally and in Toronto at the Royal Ontario Museum. In 2010, a collection of his theatre posters, most notably for Toronto Workshop Productions, was exhibited at the Theatre Museum Canada. The show was called Distinctly Different - The Theatre Posters of Theo Dimson. Dimson went on to write Great Canadian Posters.
Three Canadian stamps bear Dimson's distinctive style; two 17-cent stamps commemorate the War of 1812, one 30-cent stamp marks the centennial of the Salvation Army. He also put his design stamp on Hollywood when he created titles for the movies Moonstruck and Agnes of God.
Fashion proved to be a natural arena for Dimson's flamboyance. His attire, whether a caftan with skull cap and curled-toe shoes, impeccably tailored suit with fedora, or a vampire cape, was meant to be noticed. 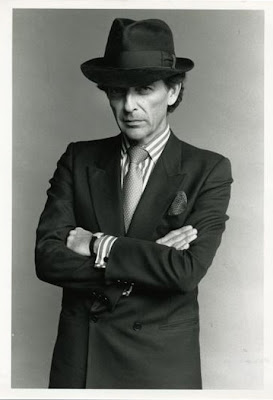 A friend, Peter Giffen, describes meeting him for lunch in a restaurant filled with conservative denizens of Bay Street. "Theo walked in. All conversation stopped and all eyes followed as he walked to my table. Theo was dressed in black leather, black hat, his fingers and ears heavy with silver jewellery. A man of unique personal style he was oblivious, or pretended to be, to all the attention focused on him throughout the meal." As an octogenarian, Dimson's garb was by DrJays, a clothing line popular with rappers.
Theophanis Dimson was born in London, Ont., on April 8, 1930, the youngest of four boys. His Greek parents, Eleni and Nicholas Kabakoupolous, operated a café. As immigrants they found it easier to do business with an anglicized name so they chose Dimson. Theophanis was shortened to Theo. His oldest brother Gus loved to draw and spent a lot of time encouraging his brother's natural talent. When Gus left grade school the principal told Theo, "Now you're the artist." Dimson was happy to assume the mantle. Years later, Dimson's daughter Nicole recalls seeing her father's art book from kindergarten. "I was in awe. It looked like it was done by someone in high school."
In 1942, the Dimsons moved to Toronto's Danforth where they bought a grocery store with living quarters above. A weekly visit to the local movie theatre with his mother ignited Dimson's lifelong passion for movies. He was particularly fond of Fred Astaire and would refer to director Federico Fellini as "my man" even though he'd never met him.
Dimson studied art, and developed a love of football at Danforth Tech. After he graduated in 1947, his brothers announced that one family member was going to get a college degree and that it would be Theo. Together they pitched in to pay his tuition at OCA. He graduated in 1950 and began a three-year apprenticeship with Art Associates Limited in Toronto.
Shortly thereafter, during a summer spent at Lake Simcoe, Dimson met and married Colleen Garvey. They had three children, Nicole, Benjamin, and Lisa. The marriage lasted 10 years. His second marriage in 1972 to Pamela Cotter lasted four years and produced another daughter, Emily. His third marriage to Judith Donoahue, and a subsequent relationship with photographer Bev Rocket, also ended.
"He never had to go after women, they came to him" says Nicole Dimson. " My dad was a true romantic who adored The Great Gatsby. He must've read it 50 times, He was in love with love. I once said to him, 'Dad, you have to work at marriage.' But he didn't believe it.' "
As a weekend father she says he was like a 'visit to Wonderland' imbuing each of his four children with a sense of magic. He took them kite flying, to the Santa Claus parade, no matter how cold the weather, and to watch B-horror movies at the drive-in. Despite their screaming, he knew they'd want to go again. He revered the Buffalo Bills and, as a season ticket holder, took his children across the border to games.
After a business partnership, and seven years of freelancing, in 1985 Dimson created a solo venture, Theo Dimson Designs Inc. Through his relationship with Bev Rocket, Dimson had been introduced to Norman Jewison. It was one of the great thrills of Dimson's career to design titles for two of the director's films. Expertise in other passions such as music (in which he had very eclectic taste), astronomy and NFL football gave Dimson an advantage when it came to meeting people.
"No matter who he was talking to, he could find common ground for conversation. It was one of his charms. He was extremely knowledgeable, and quite the intellect. He never stopped learning," Nicole says.
As a child, stars in the night sky had mesmerized Dimson. A new assignment, when he was in his 50s, reignited this passion: He was hired to design posters for Hail Columbia, an Imax movie about the shuttle. He was also asked to design shoulder patches for Canadian astronauts involved in operating the robotic Canadarm. As a result of this project, Dimson was invited to the launch. Soon afterwards he became an avid astronomer going so far as to build a shed with a retractable roof to house his telescope. He hoped to discover a star and have it named after him.
Inertia was not a state to which Dimson subscribed. Even in his mid-70s he felt the urge to seek out new experiences and decided to learn how to ride a motorbike. On the second day of instruction, the thought crossed his mind that maybe it wasn't such a good idea. This idea occurred just before he flew over the handlebars on the way to breaking his collarbone.
In his 80th year Dimson announced that he was still interested in innovative style and that beautiful women are the elixir of life. He recommended the following: "See life as a 10-year-old. Dress like an 18-year-old. Think like a 25-year-old." On his Facebook page he wrote, "You can Google me, as long as you still respect me in the morning."
Dimson died from a C. difficile bacteria infection on Jan. 18 at Soldiers Memorial Hospital in Orillia close to where he lived. The last words he heard were from The Great Gatsby, read aloud by his daughters. He leaves Nicole, Lisa, Emily, and son Benjamin, as well as grandchildren Evan, Athena and Dakota.
Published by Bado at 2:10 PM