I Don’t Want to Say Canadian Cartoonists Are Old...

J.J. McCullough on the state of Canadian editorial cartooning in Cartoon Movement. 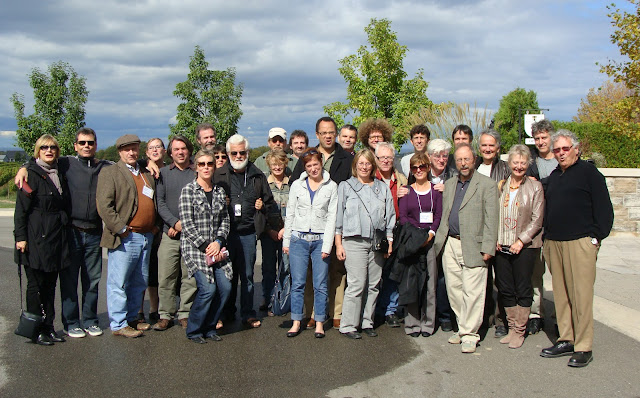 I don’t want to say Canadian editorial cartoonists are old, but at one of our recent gatherings someone literally had to leave early to tend to his 100-year-old mother. Like many industries in the country, Canadian editorial cartooning is primarily a legacy business built around a few long-running brands and a handful of domineering personalities. Like Canadian politics, it tends to be fairly closed world of conventional opinions and self-perpetuating cliques. Like Canada itself, its future is hardly certain.

It may be revealing to note that if I was writing this article 10, 20, or even 30 years ago, few facts would be terribly different. Canada’s most recognizable editorial cartoonists, such as Terry “Aislin” Mosher, Guy “Bado” Badeaux, Andy Donato, Brian Gable, and Dale Cummings, have all been employed at their respective newspapers for at least three decades.

All are sixty and up, and all generally hold the same safe, centrist political views and gentle, irreverent sense of humor associated with middle-aged Canadian boomerdom. Accomplished, acclaimed, and satisfied, they’ve put in their hours and deserve the status they’ve earned. Whether they’ll have any credible successors is another matter.

The standard model personified by these men (and they’re almost all men) is a single cartoonist employed by a single paper, usually until death or an incredibly elderly retirement. In the 2011 edition of Portfoolio, Canada’s annual “best-of” editorial cartoon collection, out of 38 featured cartoonists I was the only one under 30.

Though this is not something you’re supposed to observe in polite company, the flaws of this gerontocratic system are becoming increasingly apparent. Many of Canada’s older cartoonists have seen their talents steadily decline in their golden years, and more than a few of them now routinely churn out lazy or sloppy work that is presumably only tolerated by editors out of some perfunctory sense of Canadian politeness. The unintended side effect, unfortunately, is that a whole generation of Canadians are growing up unaware that any alternative exists.

In the United States, the country that usually perfectly mirrors Canada’s cultural development, observers often remark that the decline of political cartooning in that country (spurned by a similar disillusionment with a graying elite) is compensated by the rise of other forms of political satire, from The Onion to South Park.

No comparable trend seems to be emerging in Canada. A recent article in the liberal-leaning Walrus magazine blamed the country’s comparatively stricter laws on libel and slander as part of the problem, but a larger culture of political disengagement seems equally culpable.

Canadian politics are, in short, not nearly as interesting as they once were. The current prime minister, Stephen Harper, is a bland, conservative technocrat, and most local governments are led by men cut from a similar cloth.

Economically solid but in many ways post-ideological, the country has long been bereft of passionate, polarizing debates, even over once proudly irresolvable Canadian bugaboos like language and federalism. Good for stability, perhaps, but undoubtedly a weak era for hard-hitting political commentary at any level beyond the superficial.

Quite like America, however, Canadian newspapers remain in a state of severe existential crisis, bleeding revenue and readership to cheaper, faster online options. In such a climate, in-house editorial cartoons teeter precariously from being an extravagant luxury to those who can afford them to an extravagant waste of money for those who can’t.

2009 saw one of Canada’s most legendary cartoonists, Roy Peterson, forcibly retired from his job at the Vancouver Sun as part of a cost-cutting campaign, and it’s estimated as few as 20 people in the entire country still make a living at the practice.

To the extent they still care, many smaller Canadian papers now syndicate the surviving handful of cartoonists nationally for a couple of bucks per toon, a business model that has significantly disincentivized editorial cartooning as an entry-level position — not to mention effectively killed any lingering notions that a cartoonist should seek to specialize in local, rather than national or international commentary.

Most college papers, for their part, have long abandoned the practice of running cartoons on their own opinions pages, or do so only out of the most begrudging sense of tired obligation. If there’s a new generation of Roy Petersons waiting in the wings, in other words, they’re certainly a quiet bunch.

This is a downbeat analysis, but only because it’s hard to escape the notion that Canada is truly in the midst of the twilight of what has historically been one of its finest domestic art forms.

In their prime, cartoonists like Peterson and Aislin, as well as the late Duncan Macpherson and Len Norris were acknowledged masters in what was then a crowded international field — a remarkable per-capita accomplishment for a relatively small country — and it’s hard to study the vibrant political turmoil of Canada’s 1960s, 70s, and 80s without learning of their work and its influence.

Today, however, when fellow Canadians complement me on my work, they almost always do so with a weird mix of surprise and bitterness.

“I like your cartoons,” they’ll say. “But why is the stuff in the papers so bad?”

I suppose in another decade or two I won’t have to bother thinking up an answer.

(Editor's note: Since this article was published, Roy Peterson has passed away and Dale cummings was fired from The Winnipeg Free Press)
Published by Bado at 6:28 AM