Located as it is in France, Angoulême is nothing like any American town. For instance, unlike, say, Philadelphia, Angoulême has no nickname for outsiders to rattle off under the mistaken impression that this makes them seem like insiders. One does not travel to “Anggie”. Hmm… Do any European cities even have nicknames? How sad? Without nicknames how can any European town ever achieve the excellence of something like the Philly Cheese Steak. 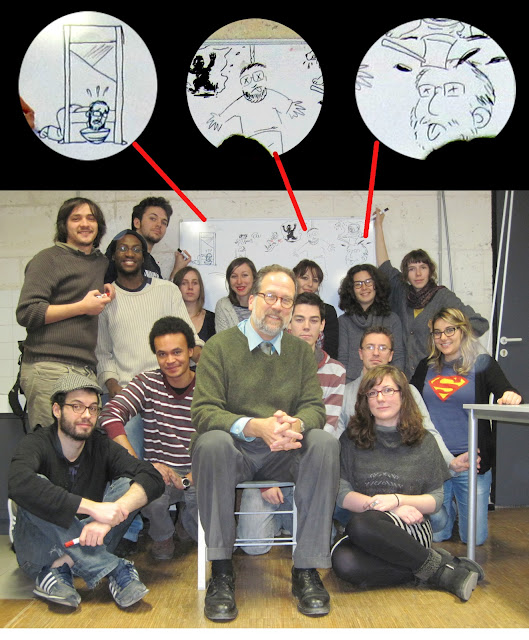 I began my two-week stay there teaching a group of bright, skillful students at the EESI Masters Program. Yes, a MASTERS Program in CARTOONING! I know that this may seem an alien concept to many of you who think of Masters Programs in terms of Law, Medicine, and Pink Floyd studies.

Each year the Festival committee chooses some famous cartoonist to be President of the Festival. They make their choice based on the systematic American Electoral College model meaning that systematically nobody understands how it is done. This year Art Spiegelman was chosen to be Grand Pooh-Bah.

To appropriate W.C. Fields’ epitaph, on the whole, Art Spiegelman, from the moment he was selected, claimed that he would rather be in Philadelphia. In the first sign of cultural rift, he referred to it as Philly.

Too bad for him. For a guy who professes to not wanting to be part of a club that would have him for a member, my chum, Art, has a lot of membership cards. This is good for me, ‘cause when it came time for him to get a very private showing in the very private museum archives with his own very private film crew, I was invited to tag along as long as I behaved myself and did not drool all over the original artwork (too much).
It’s a good thing that the Angoulême Comics Festival is an annual event. If it occurred only once you would not know if it was worse than the years before…and hence you would not have anything to reference for complaining. And complain-we-must at the Angoulême Comics Festival because mixing equal parts of “Cartoonists” with “France” creates the perfect Kvetch Cocktail. I had many conversations this past weekend with people trying to find things to complain about, including the usual subjects:

Maybe the price of gas lowered the number of school groups in attendance, but in past years the sheer number of jeunne filles and garçons made even slogging through the streets impossible. The best you could do was stand still and hope that the human tide would carry you downstream to an exhibit that you wanted to see or maybe to a bakery. I suspect that teachers finally wised-up to the fact that a comics festival makes a lousy field trip. I, for one, would prefer to take a field trip with my class to the beach where if mon petit Jacques is being eaten by a shark at least I can see him disappear.

Who doesn’t like to bitch about the weather? In Italy, university courses are given on Weather Critique, yet even my ol’ Italian amici, with whom I had dinner with on Friday night, could find nothing to criticize about the Angoulême weather. This led to a very dull table conversation. They perked up, though, when the French-style coffee was plunked down and they finally REALLY had something to complain about. 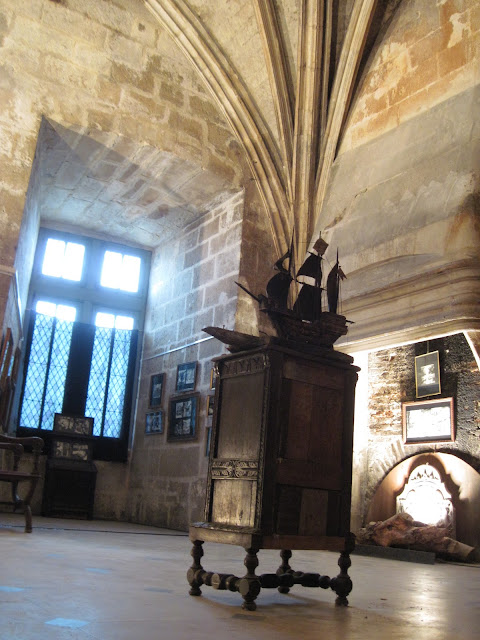 You may not give a damn about the work of Art Spiegelman but you would be in the minority at Angoulême last week judging by the throngs at the Musée de Cite. Like it or not, you cannot find fault in the installation of this massive display of his work. Last year’s Baru exhibit left people with plenty to complain about from their hospital beds while recovering from fractures received stumbling around in the darkness. Much of Art’s work works well on a wall due to its graphic appeal, confrontational content, and the fact that scientific studies have proven that people really, really like art that has plenty of cats and mice. 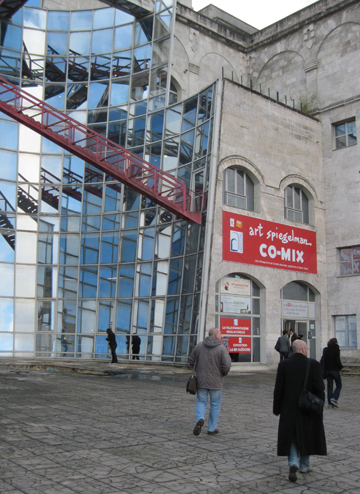 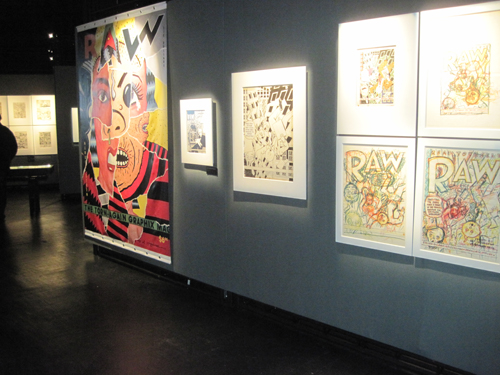 But his secret weapon in this case was that all the framing and hanging had been supervised by Rina Mattotti who hangs comic art for fun and profit at the Gallerie Martel in Paris. Rina is a genius when it comes to this sort of thing. She is also very nice, smart, and, being the wife of Italy’s greatest arbiter of female beauty, Lorenzo Mattotti, she is also beautiful. Many women want to kill her. (But oddly, no men do, for some reason that my wife will not allow me to understand.)

Rina is also a very good person to sit next to during a Festival Official Opening Ceremony because she has a nice fluffy coat that doubles as a pillow. You do not want to ever miss the Festival Official Opening Ceremony if you happen to be a 2 X 4 block of wood. All others should head to the bar. Let’s put it this way, if you were to take a vote as to what the high point of this ceremony was, the audience favorite would surely be the elderly Taiwanese man in a crisp grey suit who performed a brisk incomprehensible show with two traditionally dressed hand puppets that would not be out of place at a birthday party for six year-olds. 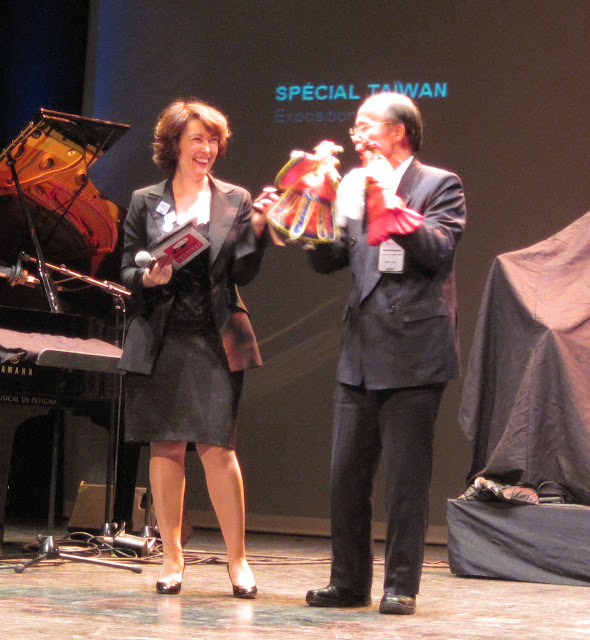 Across the river from the Spiegelman retrospective, is another Musée de Bande dessinée (which roughly translates as the “Museum of Band Aids”) that housed the “Musée Privé d'Art Spiegelman”, Art’s hand-picked version of the best and most important comics culled from museums, collectors, and dumpsters from all over the world. Rather than describe the show, I’ll just offer up a few pix of what you missed so that at least YOU will have something to complain about.


What follows is my in depth coverage of several excellent panels:
• Whatever Eddie Campbell says is wonderful because he has got the coolest accent of anyone in comics. He comes from the Sean Connery neighborhood of Scotland.

• Lorenzo Mattotti and Jacques de Loustal like to work for the New Yorker because they can make jokes with their editor, Françoise Mouly, in French about the editorial policy without anyone understanding what they are saying.

• After books detailing the Bosnian war and the Palestinian conflict, Joe Sacco’s next book will be about Pink Floyd, or maybe it was the history of the Philly Cheese Steak. Sorry, Joe, these panels began to kinda run together.

• Hillary Chute’s in depth interview with Art Spiegleman revealed that as a youth Art had learned about Alfred Caplin changing his Jewish-sounding name to Al Capp and so Art tried out several nom-de-plumes before settling on Art Spiegelman. His real name is Reginald Potterby.

Angoulême may be small but it appears impossible to start from any given point and actually arrive in time for any given event. However I did manage to arrive 20 minutes early to a RAW magazine panel. The place was packed so I sat in the only remaining available chair which happened to be on Charles Burns’ lap...not so good since he was one of the speakers.

It was the Year of the Spiegelman, right? So it might be expected that many Festival attendees might be interested in a RAW panel with Charles, Françoise Mouly, and Aline Kominsky-Crumb. The organizers’ brilliant strategy was to stage the panel in the Hotel du Palais. Sounds like it must be a grande palace with a ballroom, right? Nope. Hotel de Sardine Can had a lobby that sat about 35 people uncomfortably. This way everyone turned away would have to…go out and spend more money on comics! Formidable, oui?

O.K., so let’s see where was I on the complaint list?

Programming? NO (sort of).

That leaves the Food and the Company (highly subjective subjects) to complain about. I know that many of my cartoonist pals do not really care much about food since they live on coffee and twigs, so they can skip this part and go out to forage but be sure to come back in a few paragraphs.

I made it a point to eat duck at least once a day, a feat impossible in the U.S…especially if your goal is to eat duck prepared a DIFERENT WAY at least once a day. I had breast of duck with green pepper cream sauce, grilled duck, duck Paté de Grandmère (basically ground-up duck and ground-up grandmother mixed-together), duck with orange sauce, braised duck with rosemary drizzled with fig sauce, duck crepes, and duck tartar (duck mixed with tar, twice). I also had a sandwich on fresh baguette with spinach, goat cheese and honey. I though that I was ordering a duck sandwich but this actually turned out to be delicious and I recommend it. Much better than the Anggie Cheese Steak.

And as for the company? Well, take away everything to complain about and cartoonists are kind of somewhat nice people. Here are pix of me with cool cartoonists that I shamelessly display in the vain hope that you will think that I, too, am really cool, and will invite me to your birthday party. I’ll even bring the traditionally dressed hand puppets.