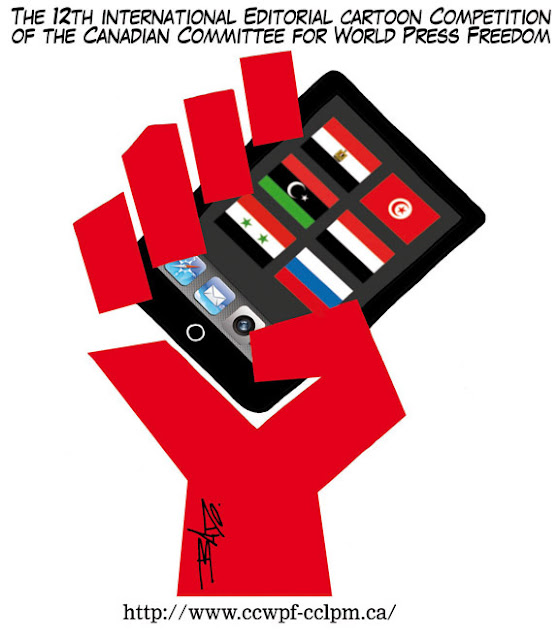 1. The theme for the 12th Competition: Power to the People: Citizens and Social Media


The year 2011 will be remembered for the ways social media — including the use of smart phones, Twitter and Facebook - ignited struggles for democracy across the globe. Images of rage in Tunisia, after a fruit vendor set himself on fire to protest police actions, of police brutality in Egypt's Tahrir Square, and of the dead body of dictator Muammar Gaddafi went "viral" within minutes. "Texting" created "flash mobs" during riots in London, Madrid and Athens. The Internet fueled the Occupy Wall Street movement and protests against electoral fraud in Russia. What is the impact of social media on our world?

2. Prizes: three prizes will be given: a first prize of $1500 plus a Certificate from Canadian UNESCO, a second prize of $750 and a third of $500. All sums are in Canadian dollars. Ten additional cartoons will receive an ‘Award of Excellence,’ Regrettably no financial remuneration accompanies the Awards of Excellence.

5. The name, address, telephone number and a short biography of the cartoonistmust be included in the submission.

7. The winners of the Cartoon Competition will be announced at the World Press Freedom Day Luncheon held at the National Arts Centre in Ottawa, Canada on May 3, 2012 as well as being advised by e-mail.
The winner’s names and their cartoons will be posted on the CCWFP website: http://www.ccwpf-cclpm.ca/

The deadline for receipt of cartoons is 5 p.m. GMT, Friday, March 30, 2012.
Send submissions by e-mail to : info@ccwpf-cclpm.ca
Cartoons should be in jpeg format at 300 dpi
Published by Bado at 4:00 AM