A review by Buzz Poole from Imprint. 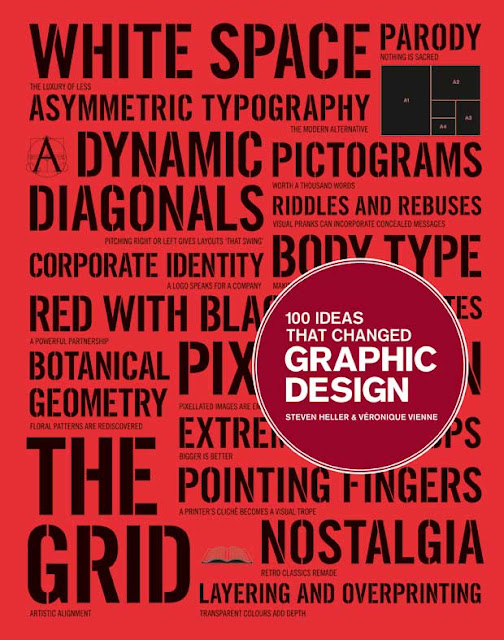 You are reading this, which means that you don’t need me, or anyone else for that matter, to explain to you Steven Heller’s encyclopedic knowledge of graphic design and visual communication. He has partnered with the art director and writer Veronique Vienne, compiling the new book 100 Ideas That Changed Graphic Design. The title speaks for itself and it is best to let the authors speak for themselves about why they took on such a daunting endeavor: “Our aim is to determine, define, discuss, and illustrate the big ideas that created the critical mass that produced the art and craft of contemporary graphic design.”

Travel in certain circles and everyone you meet is a graphic designer. The same as in any creative set, like writers, musicians, and actors, some of these designers are quite good while others aren’t. Ability aside, they all relate and identify to an established field that is defined by standard-bearers and enlivened by innovators and polemicists, some of whom become standard-bearers. This book isn’t explicitly about those individuals or their iconic design work; it is about how certain visual tendencies spoke, and speak, to one another, often unknowingly, across geographical and temporal divides. The book eschews “isms” and “unpacks those art historical categories and pulls out the individual big ideas within them.”


Organized chronologically – The Book is idea #1, Designers’ Websites is idea #100 – the order is nowhere near as important as the content. Heller and Vienne knowledgably connect the dots of the examples they use to make the case for the inclusion of the respective ideas. Citing initial applications and implementations of aesthetics or processes and indicating their prominence over time serves as the book’s most valuable asset. Take Pointing Fingers (idea #6): the authors point out (pun intended) how the visual cue was “commonly used in nineteenth-century printing, on posters, bills, and advertisements, to be emphatic.” With the start of World War I, however, it “acquired more gravitas” when used on recruitment posters, first in England and later across Europe and in the United States. The first example of Monumental Images (idea #9), the Colossus of Rhodes, completed in 280 BCE, “is a model for the gargantuan advertising display” the same as the Statue of Liberty “might be considered a giant advertisement ‘mascot’ for the idea of freedom and the American way of life.” In the case of this idea, argue the authors, history has taught us that size does indeed matter: “To make the boldest statement possible, increasing the size of the most commonplace objects or physical features, and adding the right words, phrase, or slogan, does wonders.”


Of course, hundreds of images grace the pages. Each idea gets a similar layout treatment with most of the spreads consisting of one full-page example and a handful of smaller images tucked in around the text. For certain of these ideas, there is a disconnect between the examples mentioned in the text and the examples shown on the page. For instance, Rays (idea #4) is introduced as “[o]ne of the most ancient iconographic symbols” but of the three visual examples, the oldest one is a 1965 Tadanori Yokoo poster. The same can be said of Visual Puns (idea #19), which references Milton Glaser’s 2004 Olympic poster design without showing us the design (though I was tickled to see my buddy Noma Bar’s work included among such a collection of design luminaries – check out his new Wallpaper* covers). The authors do emphasize that this is a study of how history has maintained freshness in contemporary visual communication, which doubtless played into how the imagery was selected, but the strength of these ideas is longevity that remains relevant, so when it comes to the illustrations a bit more historical perspective would be that much more illuminating.


Many of the images are familiar. Does anyone really need to see Glaser’s “I Love New York” logo again, Paul Bacon’s cover design for Catch-22, or Stefan Sagmeister’s torso-scratched AIGA poster? I don’t think so. And it’s not because these works aren’t important, they are, but they are so established within the visual communication vernacular that we know them, like Americans know George Washington’s portrait from the dollar bill. Furthermore, none of these designs are firsts per say. That’s what this whole book is about, the continuum of visual communication and how trends and tropes build on one another, subsume and resurrect one another thanks to myriad cultural, economic, political, and technological circumstances. As Heller and Vienne point out in their introduction, all the book’s ideas comprise “the ambient language(s) of design.”


Of course, graphic design is an academic field, as well as a profession, so there will be plenty of design students who read this book never having seen or really thought about Saul Bass’s Anatomy of a Murder poster (Primitive Figuration, idea #21) or Robert Crumb’s Zap (Underground Comics, idea #85). For those students, and anyone else simply wanting to glean some understanding of the visual landscape we all share and engage, from magazines to product packaging, concert posters to film title sequences, this book is an invaluable resource.

For those familiar with graphic design, there is no shortage of material that can be used for inspiration, sparking debates, and furthering conversations. Some of the ideas seem so similar as to not warrant separate entries, like Clenched Fists (idea #8) and The Provocative Gesture (idea #50). This is not to say that the authors don’t make independent cases for the two respective entries, but in truth they encapsulate the same emphatic, corporeal mode of graphic expression. It is also hard not to wonder about certain inclusions, like Ambigrams (idea #99).

But Heller and Vienne knew such quibbles would be one result of their efforts. While the book’s primary purpose, which it achieves splendidly, is to be informative, the authors also sought to provoke their readers: “We were not shy about expressing our opinions when we thought that an idea was not as brilliant as it could have been. Sometimes we even challenged the official version regarding the value of certain design practices or the outcome of an invention. In other words, we acted as critics as much as historians. Our goal is to encourage readers to do the same. Graphic design needs more critics.”