The Story Behind my National Newspaper Award 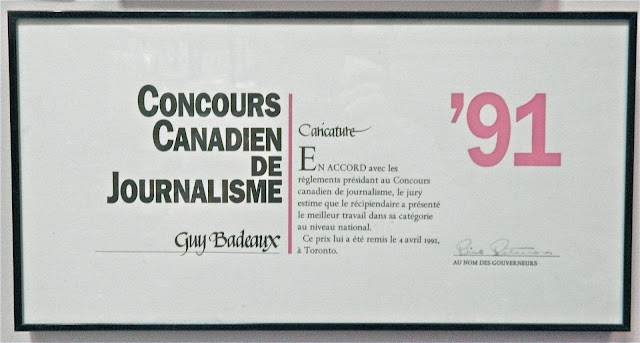 While attending the Association of American Editorial Cartoonists' convention in Memphis, Tennessee in 1991, Martyn Turner, of the Irish Times, Roar Hagen, of Verdens Gang in Norway, Signe Wilkinson, of the Philadelphia Daily News and myself decided to skip the business meeting and visit some famous Civil War battlefields down Highway 61.

As fate would have it, we came upon the town of Clarksdale, Mississippi which bills itself as the "home of the blues". Martyn and myself, being great fans, decided to visit their blues museum, located in the local library, and ended up spending the whole afternoon in town.

On our return to Memphis, we drove by the famous "crossroads" and decided to immortalize our visit. Since Roar had no idea what this was all about, it was decided that he would be the photographer.

As Martyn happened to be wearing a Grateful Dead t-shirt with a skull on the back, he ended up playing the role of the devil. Signe posed with him and pretended to give him $20. and I did likewise.

Several months later, Signe and I respectively won the Pulitzer and NNA for editorial cartooning!

The film was sent from Norway to the editor of the AAEC bulletin at the time but was somehow lost. Which makes this improbable tale a combination of both Mephisto and Dorian Gray.