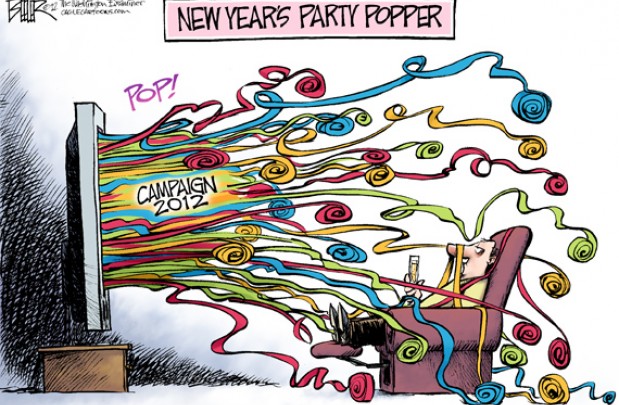 The Columbus Dispatch has named Bexley native Nate Beeler as its new editorial cartoonist.
At the Washington Examiner, where he has worked since 2005, Beeler earned the reputation of being a witty cartoonist, top-flight artist and first-rate journalist. He doesn’t play favorites, showing a willingness to hit to all political fields.
Among other awards, Beeler won the 2009 Thomas Nast Award from the Overseas Press Club and the 2008 Berryman Award from the National Press Foundation.

The judges for the 2009 Nast award said, “Nate Beeler’s entries stood out for their powerful and vivid composition that brings the message home regardless of whether the cartoon centers on a conversation or a visual punch line.
Notable for his use of color and for meticulous art work that, in the words of one of his editors, ‘treats each cartoon like a painting.’  ”
The 31-year-old graduate ofAmerican University will begin his work at The Dispatch within the next month.
“We were fortunate to have a strong pool of applicants for this position. Nate’s artistic and journalistic talents made him our top choice,” editor Ben Marrison said. THERE’S NO PLACE like D.C. to skewer politics with your pen. But there’s also no place like a hometown when offered a new journalism perch. Nate Beeler, the gifted political cartoonist for the Washington Examiner, will be picking up his professional stakes and relocating to his ol’ Ohio stamping grounds within the next few weeks, as he becomes the new cartoonist forthe Columbus Dispatch. Yet that doesn’t mean it’ll be easy to leave D.C. — a move he calls “bittersweet.”

“I’ve been at The Examiner since the first moment of its existence,” Beeler tells Comic Riffs of his workplace since 2005 (he had joined the Journal Newspapers two years earlier, when he graduated from American University). “As a page designer, I assisted on the first few iterations of its design. I cut my teeth as a cartoonist when it was still fighting for a foothold in D.C.

“I’ve seen other employees come and go in the newsroom, and I kept plugging away at my drawing table,” Beeler tells ‘Riffs. “However small it was, it feels like I had a hand in building the Examiner into the Washington fixture it is today, which makes my departure a bit bittersweet. I’ve always felt incredibly privileged to draw editorial cartoons in the nation’s capital, and I will miss the energy of its politics — no matter how ridiculous it is at times.” While Beeler has been at the Examiner — doggedly creating five cartoons a week for his paper’s page-2 — his honors included the National Press Foundation’s Berryman Award (2008) and the Overseas Press Club’s Thomas Nast Award (2009).

Beeler’s Examiner bosses send him off with high compliments, writing: “Only 31, Nate is a fine draftsman, a natural wit, and a first-rate journalist. And while each of his cartoons has a distinct point of view, he is no ideologue.“
The cartoonist returns the high compliments. “I will most dearly miss my editors and colleagues at the Examiner,” he tells Comic Riffs. “Thankfully, when I need their wisdom, which I’ve come to rely on, I’ll only have to open up my Web browser.”
The Dispatch’s position came open, though, when its veteran cartoonist Jeff Stahler quit in December after being accused of plagiarism.

“When the Columbus Dispatch asked if I was interested in applying for the cartoonist position, I couldn’t say no,” Beeler tells ‘Riffs. “It’s the number-one newspaper in Ohio, and Columbus is both the state capital and my hometown. My parents live there, and this was an opportunity for my son to grow up with his grandparents being a big part of his life.”
Besides the personal appeal, Beeler is eager to mix it up in a state long known for being not only a pivotal hot-spot in politics, but also a hotbed of cartooning talent.
“Given the journalistic pedigree of the newspaper and Columbus’s storied cartooning history,” Beeler tells us, “I’m humbled the Dispatch chose me.
“I’m getting excited about the prospect of slinging around some ink in Ohio politics.”