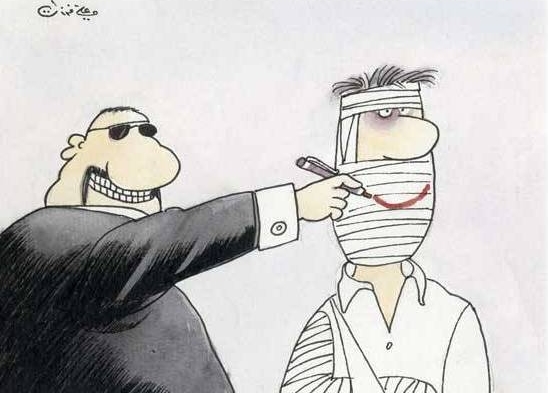 Political cartoonist and ‘icon of freedom in the Arab world’ Ali Ferzat has spent decades satirizing Arab rulers and authorities in more than 15,000 caricatures, offering an acute visual commentary on the brutal practices of the Syrian Ba’ath regime.
In 2001, Ferzat launched the satirical newspaper, Al-Domari (“Lamp-lighter”) which was forced to close by the Ba’ath authorities in 2003, and his cartoons have been banned in several Arab countries. For denouncing the corruption and abuses of Bashar Al-Assad’s rule, he was attacked in August by masked gunmen, who broke his hands as a warning.
In 2011, he was awarded the Press Freedom Prize by Reporters Without Borders and Le Monde. He has been nominated for Index on Censorship’s 2012 award for artists, filmmakers and writers whose work asserts artistic freedom and battles against repression and injustice.
This is an extremely rare chance to see work produced by Ali Ferzat over the course of the last year.
Ali Ferzat will also be discussing his work at a forthcoming event hosted by Amnesty International on Thursday March 22nd. For more details click here
This event is sponsored by Amnesty International, Mosaic Initiative for Syria and Firefly International


LONDON (Reuters) - The moment Syrian cartoonist Ali Farzat chose to depict President Bashar al-Assadand his "inner circle" in his drawings, he knew he was courting trouble.

The 60-year-old, famous across the Arab world and beyond for bitingly satirical works ridiculing corruption, nepotism and narrow-mindedness, had always avoided identifying individuals in his art.

That was until a few months before the uprising against Assad began last year, at which point Farzat felt the president had gone too far in stifling freedom of expression and crushing dissent. That's when it got personal.

"I made that shift from using symbols to portraying actual figures, and little by little I began to see my cartoons being carried by protesters," Farzat said, surrounded by his works on display at the Mica Gallery in central London.

"They became a symbol for them."

One of his first cartoons portraying Assad — long a taboo in Syria — showed the president reluctantly ripping a page off a calendar on Thursday, knowing that Friday would bring another wave of popular protests to the streets of Syria.

In another, Assad tries to hitch a lift with outgoing Libyan dictator Muammar Gaddafi, and a third shows Assad beside a large armchair, unable to sit down because the springs have broken.

"Even the chair won't accept him any more," Farzat explained with a smile.

When the revolt against Assad kicked off, Farzat received threatening phone calls and messages, but not even that prepared him for the ferocity of the attack which came in the early hours of August 25 as he left his Damascus studio.

Three masked men he described as "thugs of Assad" dragged him from his car and beat him with batons before putting him in their own vehicle and continuing the assault.

"I could hear them saying 'break his hands so they never dare challenge his masters again'," he told Reuters, speaking through an interpreter.

"They hit me and hit me, on my head, on one hand and then the other and were trying to make sure they broke them.

"I had concussion and bruises over the whole of my body. My hands were broken so badly that the movement is still limited."

Dumped on the side of the street, possibly for dead, Farzat was picked up by a stranger and taken to hospital where he recovered. He later left for Kuwait where he has a "residency".

The attack triggered outrage in Syria, where it was taken as a sign that Assad's government would brook no dissent, even from a man who once knew the president personally.

Farzat recalled meeting Assad in the 1990s when he was the president's son, and enjoying a dialogue in which the future leader earnestly sought the views of the "man on the street".

Assad would visit his exhibitions and discuss political issues with Farzat and fellow artists and intellectuals, and Farzat established the satirical Al-Domari publication.

A brief period of openness in the early 2000s ended suddenly, Farzat said, forcing the closure of Al-Domari and prompting many like-minded thinkers to move abroad.

"I don't know what happened all of a sudden," Farzat said.

"It was as if he (Assad) was there and, when we looked again, he was gone. We couldn't communicate with him, we couldn't get through. We used to be able to talk to him. He completely vanished."

As long ago as 2007, Farzat warned of impending crisis in Syria if the government did not reform.


Now that a full-scale revolt is underway, he believes there is no turning back.


"At that point the revolution became victorious. The question is always 'when will it end?' I don't know, but it has already triumphed.


The cartoonist, who reportedly received a death threat from Saddam Hussein in the 1980s, has not given up on the idea of returning to Syria from self-imposed exile.


"Every day I say I will go back to Damascus. Every day people say to me 'don't go back, it's too dangerous.'


"One of these days I am just going to do it, because the reality is I can't stay away from my country for much longer."


He has returned to work after the attack, although the movement in his hands is restricted. One of his most recent cartoons shows a tiny flower lifting a tank into the air as it sprouts from the ground.
Copyright © 2012, Reuters