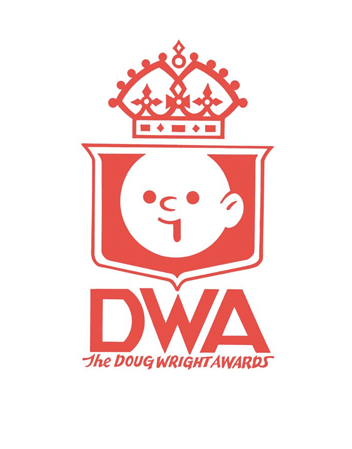 Brown, Seth, Beaton, Ollmann, DeForge short-listed for 2012 Doug Wright Awards
Legendary cartoonist Terry ‘Aislin’ Mosher to be inducted into Hall of Fame during annual ceremony
Toronto, ON — The Doug Wright Awards, Canada’s premier comics awards, are proud to announce their finalists for 2012. The 15 nominees include established heavy-weights and past winners (Chester Brown, Seth, Marc Bell, Joe Ollmann, Kate Beaton) and a slate of extraordinary younger talent that together represent the finest in Canadian comics.
The nominees for the 2012 Doug Wright Award for Best Book are:
The nominees for the 2012 Doug Wright Spotlight Award (a.k.a. “The Nipper”), which recognizes talent deserving of wider recognition, are:
And the nominees for the 2012 Pigskin Peters Award, which recognizes the best in avant-garde or experimental comics, are:
Founded in 2004, The Doug Wright Awards recognize the best in English-language comics (or translations of French) by Canadians living in the country and abroad. Now in their eighth year, the awards will take place on May 5, 2012 in Toronto at the Art Gallery of Ontario’s Jackman Hall as a feature event of the Toronto Comic Arts Festival (TCAF.)
The Doug Wright Awards and TCAF are also pleased to announce that legendary political cartoonist Terry Mosher (who works under the pen name “Aislin”) will be on hand at this year’s  ceremony to be inducted into The Giants of the North: The Canadian Cartoonists Hall of Fame.

This year marks Mosher’s 40th anniversary of publishing his acerbic and often hilarious cartoons in The Montreal Gazette. The Doug Wright Awards, along with its partner TCAF, are proud to have him in-the-flesh for an on-stage discussion about his colourful career and life with writer and Toronto Star columnist Rick Salutin.
Spirited, smart, and always controversial, Mosher will also be a Featured Guest at TCAF which will be held May 5-6, at Toronto’s Reference Library.
The nominees for the 2012 Doug Wright Awards were chosen by a committee from a long list of nearly 100 works and submissions published during the 2011 calendar year. This year’s nominating committee included Jerry Ciccoritti, Jeet Heer, Bryan Munn, Chris Randle and Sean Rogers.
The 2012 winners will be decided by a jury that will include: visual artist Shary Boyle, cartoonist John Martz (A Doug Wright Award Best Emerging Talent nominee in 2010 and Pigskin Peters Award nominee in 2008), book artist and professor George Walker and Julie Traves, deputy arts editor forThe Globe and Mail.