I’m very sad to report that my friend Rex Babin, the brilliant cartoonist for the Sacramento Bee and a longtime contributor to Cagle.com, passed away this morning after a two year long fight with stomach cancer. A little over a year ago, Rex took a medical leave from his position as the paper’s staff cartoonist, and has been drawing off and on since.

Rex was a friend, and a mainstay of the Association of American Editorial Cartoonists, serving as president in 2010. He was the winner of the National Press Foundation’s 2001 Berryman Award and was a finalist for the 2003 Pulitzer Prize. His cartoons were nationally syndicated by King Features.

My thoughts go out to his family, especially his wife Kathleen and their son Sebastian. What a sad day and a terrible loss for the profession.

Here is his last cartoon, which appeared in the Bee on March 4:

The obit from The Sacramento Bee: 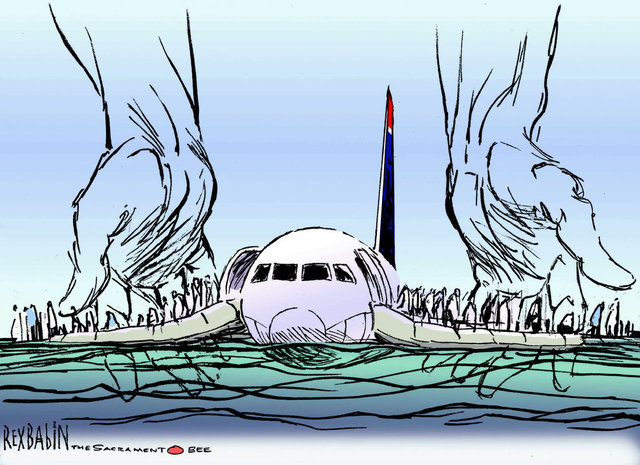 The "Wings on the Hudson" cartoon showed a different, more emotional side of Babin to Sacramentans who were accustomed to the sharp observations of his political cartoons: It showed his heart.
Babin died at his Curtis Park home early Friday morning at age 49 after a long struggle with stomach cancer.
"That cartoon resonated with people on the flight," said his wife, Kathleen. "He heard from many of the passengers and crew, and he presented it to Captain Sullenberger when he was in Sacramento. The reaction was amazing.
"But he liked the ones that stirred up controversy. He was proud of doing that."
For Babin, passion was the point of his work. With what Sacramento Bee Editorial Page Editor Stuart Leavenworth called "an amazing blend of edge and humanity," Babin's cartoons touched people, stirring their anger and outrage, making them laugh and making them think.
"When Rex nailed a cartoon, it resonated more than anything we could say in words," Leavenworth said.
Many of the political figures he'd skewered over the years remembered him with praise.
"In politics, as in life, you have to be able to laugh at yourself from time to time," said Gov. Jerry Brown. "Rex had a unique ability to make biting comments in a way that still managed to put a smile on your face."
Said former Gov. Arnold Schwarzenegger: "Rex was truly a great artist. He put a smile on people's faces, even as he educated the people with his cartoons and made them think about difficult current issues."
He liked to tell people that he was born to be a cartoonist: From the time he was in diapers, he was drawing and playing with crayons.
He was born in Walnut Creek to Shirley and John Babin. When he was 4, his father died of myasthenia gravis, and his mother moved Rex and his younger brother, Trent, to Los Angeles, where she sold real estate.
A field trip to the Los Angeles Times when he was in junior high showed him a career, after he saw the work of Pulitzer Prize-winning editorial cartoonist Paul Conrad, Kathleen Babin said.
He cartooned for the student newspaper at San Diego State University, where he majored in English. After working as a graphic artist at the Orange Coast Daily Pilot, where he met his wife, he worked as editorial cartoonist for the Times Union in Albany, N.Y., and the Denver Post.
Babin joined the Bee in 1999 and was a finalist for the Pulitzer Prize in 2003. He was also a past president of the Association of American Editorial Cartoonists.
"He was a cartoonist who other cartoonists really respected," said his longtime friend, Jack Ohman, editorial cartoonist for the Portland Oregonian. "I thought he was the most artistically talented cartoonist in the U.S. He was almost painterly in his approach.
"He was influential with other cartoonists because he challenged them all the time to talk about local issues that affected their own readers."
He took special pride in his local cartoons, which provided pointed commentary on City Hall, the Capitol and local life. Babin continued working whenever he felt visually inspired by the news and up to drawing, his wife said. And his last cartoon was published on March 4.
"Rex shared a piece of himself with every cartoon he drew," said Cheryl Dell, publisher of The Bee."His wit, wisdom, sense of optimism and friendship will be sorely missed both by readers and his Bee family."
Those closest to him knew that Babin was a devoted family man who described the day his son, Sebastian, now 10, was born as the best day of his life; and an athlete who played football in high school, surfed in college and for the past two decades was a competitive rower.
"We were friends because we both loved the outside," said fellow River City Rowing Club member Peter Brostrom. "We liked to talk politics and sports. We're both passionate about our families and friends and life in general.
"I had a lot of conversations with Rex this past year about what life means. A lot for him involved recognizing at the end how truly beautiful life is and what a gift it is."
Babin is survived by his wife, Kathleen, and their son, Sebastian, as well as his mother and brother, who live in Las Vegas.
Services are pending. The Bee is setting up a trust fund for Sebastian Babin.
Sign the Rex Babin guest book, leave condolences
Gallery: Rex Babin's favorite cartoons
Gallery: Best of Babin 2011
See Rex Babin's cartoons, animations

Rex Babin, staff cartoonist for the Sacramento (CA) Bee and recent past-president of the
Association of American Editorial Cartoonists, passed away early on the morning of Friday,
March 30, following a long battle with cancer. He leaves behind his wife Kathleen and his
10-year-old son Sebastian.
During his quarter-century of involvement with the association, Rex was one of its most
devoted and hard-working members. His humor and restless pursuit of stylistic
development made him a pleasure to be around and an inspiration to his colleagues.

Jack Ohman, staff cartoonist for The Portland Oregonian, was a close friend of Rex's and
wrote the following tribute.
Tribute to Rex Babin
by Jack Ohman
The death of Rex Babin has hit our now-miniscule cartooning family very hard, harder than anything we thought we might be prepared for. This magnificent man, this vital athlete, this superb artist and thinker, has left an intellectual and emotional void in the community we love.

I first met Rex at the AAEC Washington convention in 1987; he was 24, and me, at 26,utterly detested for having the MacNelly client list handed to me in a silver chalice in 1981. It was my first, nervous convention, and his. Rex came to greet me, along with many others who weren’t, you know, bastards.

Rex had the soul of a polymath. Everything fascinated him. Further, no one thought himself more integral to the success of his newspaper—not his career—than Rex. Rex preached local cartoons, and I doubt he could have had any more influence in California politics than he had. While privately delighted at the attention, he would have snorted at the tributes, which were along the lines of “them damned pitchers.”

Sometimes, Rex fussed over the things we all from time to time have fussed about. Ultimately, the gifts we sought in our careers either seemed hollow or a fluke. The gift Rex took was the gift we should all share: the love of craft, and the perpetual desire to improve. He would also say the love of his peers, which is like being in the coolest club in the United States. Cartoonists know they have instant B&Bs from coast-to-coast. No reservations.

Rex was always trying new pens, new paper, new computer programs, new gadgets, and seeking new influences—writers, painters, architects, sculptors, instead of bogging down in the usual mire of our trade. If you knew Rex, you also knew that he loved nothing better to have a microscopic conversation about line quality or lettering. One day, in the hundreds of days we spoke on the phone—blunt, profane, whiny, raucous conversations—he asked how I was. I replied, “Ink drag.” Then he was off on a soliloquy about how letting the top off on ink bottle for a few days was a science: new ink, too light, man…but slightly aged, goopy ink could create a line to die for.

But if it was too exposed to the air: Ink drag. Bad.

Other days, we may have greeted each other with an impression of an air traffic controller conversation: “United 228 Heavy hold at six thousand, clear runway 6-L, uh, thank you sir.”  Other times, he may have just said, “Hey F***er.” And I knew he was referring to me.

To us it was a warm up to a chat about…anything. Which lasted for hours. Sometimes he would call, usually on Friday afternoon as I was about to pass a watermelon covered in broken beer bottles on deadline, and simply say, “Scratchin’?”

Yep. You? Yep. We would describe our respective ideas, which I hated, because mine sometimes were not reduceable to a set-up/punchline. But, neither were his. Except one time, late in the 2010 California governor’s race, I called him after Meg Whitman was described as a “whore” by a Brown adviser. I said, here’s your idea: two guys in front of the statehouse, and the one guy says, “Who’re you voting for?” He drew it. It ran.My finest moment. He was lionized for his “Hands of God” cartoon about the Sullenberger Hudson River miracle. He was prouder of how well he drew the hands and the plane. Later, I would say, oh, just draw the Hands of God holding Gingrich or whatever. He had a crooked smile that migrated up the left side of face, and he would say, screw you. He knew his cartoon was amazing.

Rex’s cartoons sometimes were so different that I would wonder how the hell he got there. While I was dutifully executing a candidate standing at a lectern (boring, tedious), he might be meticulously rendering a 1700s Parisian street scene as a metaphor for the California budget. Oh, and there was a perfect Gov. Ahnolt in the frame. Sometimes I would just want to quit after seeing one. If Rex drew a cabinet, he would go into a furniture design book and faithfully draw a Stickley cabinet. Or an 18th Century French cabinet. Whatever he wanted.

He called me around Christmas 2010 and told me that he had cancer. Stage IV. Inoperable. He wasn’t falsely optimistic. I burst into tears on the phone. He said, “Stop it, goddamn it. I’m up for a fight.”

I called him about 2-4 times a week, usually at 9:15 pm. His treatment was discussed. Cartoon gossip was exchanged.  Finally, he tired of discussing the various shortcomings of selected peers (discussed clinically), and so did I. What’s the point?

As we parted on the phone, he would say, “Well, I love you.” I would say it, too, even as my Minnesota frozen wingnut seemed static, frosty, immobile.

Toward the end, a few weeks ago, he said something fearful. I would listen for awhile. Then I would say, “Jesus, Rex, this isn’t Brian’s Song yet.”

And I’ll never see 9:15 pm again without seeing your face.