While the British Army lay siege to Quebec City during the summer of 1759, Canada’s first political cartoonist was busy amusing the troops. Skilled with both the sword and the quill, Brigadier-General George Townshend — who was, it should be noted, third-in-command to General James Wolfe — drew and circulated several unflattering sketches of his commanding officer.

“Upset by these insulting portrayals, Wolfe wanted an official inquiry,” writes the cartoonist Terry Mosher, better known as Aislin, in his introduction to Cartoon Canada, a newly published survey of Canadian political cartoons. “However, as we all know, Wolfe died on the Plains of Abraham and — how auspicious for Canadian cartooning! — it was George Townshend who accepted the surrender and signed the peace treaty.”

“I wanted to make this a real showcase for the talent in Canada,” Mosher says. “I’ve been all over the world, and as far as I’m concerned … Canadian cartoonists can hold their heads high. They’re as good as anyone in the world.”

The idea for the book came out of a conversation Mosher had with the Russian-Canadian cartoonist Oleg Dergachov, who told Mosher of a Russian cartoonist who asked, as his dying wish, that his favourite cartoon be engraved on his headstone. Mosher, currently the president of the Association of Canadian Editorial Cartoonists, posed a question to the group’s members: “What cartoon have you drawn to date that you would most like to be remembered for?”

“It was magic the way this stuff began to pour in,” recalls Mosher, on the phone from his home in Montreal, where he continues to draw cartoons for the Montreal Gazette. In the end, all of the association’s 90-odd members (including the late Norm Muffitt, a.k.a. BUSH, to whom the book is dedicated) submitted a cartoon.

“My God, I’m very pleased — very proud, actually — of the quality and the determination,” Mosher says. “The problem is a lot of Canadian cartoonists are taken for granted. But, in China” — where he’s going in August for an animation convention — “I’m going to promote Canadian cartooning. I’m going to be like some businessman over there selling a pipeline.”
The book also includes several Canadian cartoonists whose work is better known elsewhere; Cartoon Canada features Dusan Petricic (Serbia’s most popular cartoonist), David Parkins (who contributes to The Guardian, The Times and The Observer) and Anita Kunz (who has illustrated covers for The New Yorker, among other high-profile publications).

This weekend, Mosher will welcome many of the association’s members to Montreal for its biennial convention, during which time the book will be featured alongside Cartooning Calamities, an exhibition featuring the work of 16 Quebec editorial cartoonists, which takes place at the McCord Museum from now until the end of the year.

It’s been a busy year for the 69-year-old Mosher, who was inducted into the Canadian Cartoonist Hall of Fame last month in Toronto. This was, he laughs, “the year I promised my wife I’d take a little time off.” But besides Cartoon Canada, the exhibition and his upcoming trip to China, he’s about to publish his 45th book, Was It Good For You?, a collection of his favourite work over the past three years.

“I’ll slow down after that, I promise.” 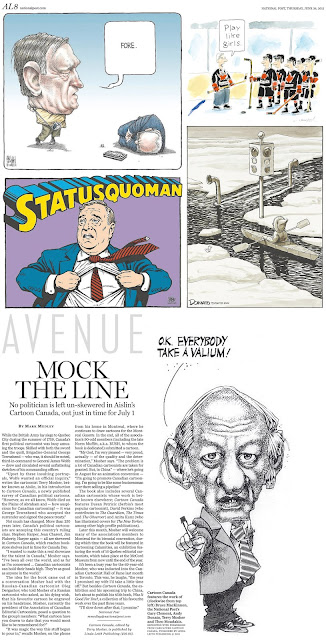