Malaysia bans cartoons during election but Zunar will defy the ruling 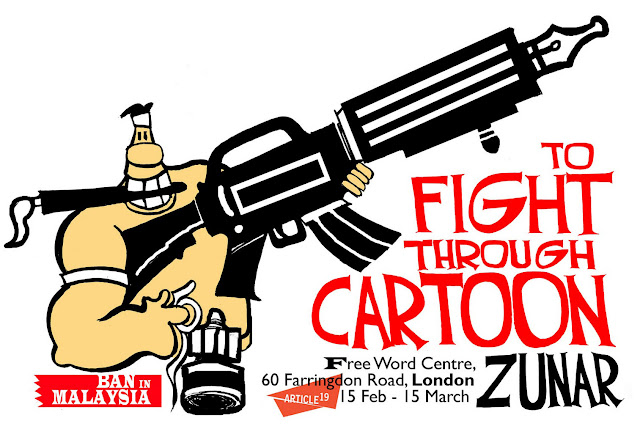 Press statement by Zunar
I would like to refer to the ruling made by the Election Commission of Malaysia which bans the use of cartoons in the campaigns for the up-coming General Election. (General election's date in Malaysia can only be decided by the Prime Minister, but must be called before the current term ends in March 2013).
STATEMENT: The banning of cartoons during the election is comical and ludicrous. This is because cartooning is a legally-practiced medium in Malaysia and therefore the Commission does not have the right to forbid its use. Moreover, this is contradicting to the freedom of expression as provided to all citizens in Malaysian Constitution.

Malaysia has been ruled by the same political party since she gained independence 55 years ago. Since then, cartoons have been used as part of election campaign tool since the first general election.
Why ban it now? It is no coincidence that this ruling comes after the rise of young Malaysian cartoonists using cartoons to criticize the ruling government. I call for the Commission to withdraw this rule or it will become another Malaysian product of jokes to the world community. Recently, Malaysia has become a laughing stock due to the action on cartoonists such as banning of comic books, the detention of cartoonist under the Criminal Act, as experienced by me.

Nevertheless, I would like to announce that I will be leading a group of cartoonists, the Kumpulan Kartunis Independen (KKI) and will be actively involved before and during the next election campaign.We will be opening our own Cartoonist Operations Centre and will be moving as a group in a van while campaigning for the coming election. Our focus is to expose fraud and corruption, misuse of public funds by the current government - such as Scorpene Scandal, NFC, the domeneering of the PM's wife, etc. The message-laden cartoons will be distributed in various forms: brochures, posters, banners, videos, to name a few.
I am ready to face the consequences!

Zunar is the foremost Malaysian political cartoonist. He has been arrested and briefly detained under the Sedition Act for drawing cartoons that challenged official views. Seven of his books are banned by the Malaysian government, his office has been raided twice by enforcers, the printing factories that printed his books are constantly raided and vendors throughout the country are often warned not to sell his books.
Published by Bado at 9:47 PM