A Guy, a Palm Tree, and a Desert Island: The Cartoon Genre That Just Won’t Die 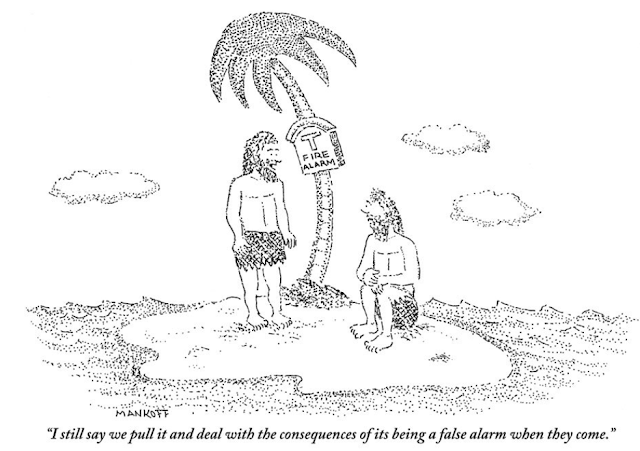 You’d think by now, in a world equipped with G.P.S. and Google Earth, cartoonists would have wrung every last drop of humor from the premise of castaways marooned on desert islands. After all, they seem to have finally run through ladies trying to return hats and dresses for frivolous reasons, and explorers stewing in cannibal pots. And won’t the castaways reveal themselves, anyway, when they inevitably check in on FourSquare, so where’s the joke?

But this week, there on page 58 of The New Yorker is a witty, terrific cartoon by Bob Mankoff, set on a desert island with just enough room for two castaways, both shirtless and wearing shredded pants, and a single palm tree sprouting from the middle of the island—classic!

Mankoff is also The New Yorker’s cartoon editor. (His blog, a must for cartoon fans, is here.) Always eager for an excuse—any excuse—to talk venerable cartoon tropes, I gave him a call to discuss the history of this genre, to which he was only the most recent contributor:

Bruce Handy: Tell me—is there a patient zero for the desert-island cartoon?

One of the interesting things about that is that originally the desert island in cartoons is quite large, and the ship is sinking in the background, so there’s a narrative. You sort of understand how they got on the island. Later, the island becomes an icon [i.e., the tiny island with a single palm tree].

Is it true that at one point William Shawn [who edited The New Yorker between 1952 and 1987] banned desert-island cartoons?

I think at one point everyone banned them, because they get tired of them. But the genre keeps morphing, if you will, to change with the times. On our database I see more than 360 desert-island cartoons. The original ones were more about isolation from the strictures of society, especially the moral strictures of the time. If a man and a woman were on the island in the 30s or 40s, the cartoon probably has a sexual content. The woman might be asking the man, “How can I be sure you’re a millionaire?”

Then, later, the cartoons represent different things, mostly just isolation. And eventually they just represent the cartoon trope, if you will. For instance, I did a cartoon in the 80s that has a man on a desert island thinking, “No man is an island, but I come pretty damn close.” And he’s tiny, and the island is tiny. And that’s one of the interesting things that happened over the years, that it’s not a real island anymore. Originally it was a real island. Now it’s more the idea of an island, an icon.

Whereas, as I said, the original islands have debris on them—a life preserver, that kind of thing—more realistic details. They’re not iconic because it has yet to be established what the iconography is.
I once did a search [on our database] and I think the year of the greatest popularity of desert-island cartoons in The New Yorker is 1957, when 17 appeared.

I wonder if it was some kind of Cold War statement, or fear of the bomb. Maybe something about social isolation—The Man in the Grey Flannel Suit—or wanting to flee society’s strictures.

As the magazine’s cartoon editor, do you feel you have to set a higher bar for desert-island cartoons?

Oh yeah, there’s always a sliding scale. Desert-island cartoons are like lightbulb jokes. It’s not like you can use them up. They can act like kudzu—they can take over everything. Sort of like animal cartoons can, because they’re easy and natural to do. There once was an issue in 1959 in which Jim Garaghty, who was the cartoon editor at the time, said, “O.K., enough animal cartoons.” So they ran all animal cartoons in a 1959 issue. And nobody noticed.

So yeah, it’s definitely a higher bar for desert-island cartoons, because it’s an easier joke to make. It’s easier to relate it to almost anything at all. And also now the jokes tend to be almost completely self-referential.

Do you get at least one a week in submissions?

Probably. These clichés and genres taper off. Partly they taper off because of whatever the political climate is. For example, in the 30s and 40s there were lots and lots of cartoons about sugar daddies, and all the money that they’re giving to women, and alimony, and divorce. You have cartoons in the 30s and 40s which take sexual harassment as a given.

Absolutely. The guy chasing his secretary—he says, “Do you realize, Miss, that my time is worth $30 an hour?” That type of stuff. (It’s in the 40s so the money makes sense.)

So you see tapering off with some genres—not so much with the desert-island cartoon, but certainly with Eskimo cartoons and the gods-are-angry cartoons. In the 50s and 60s there are a lot of cartoons with natives in Africa, and you won’t have any of those now. So those genres tend to go in and out. And also now, because you have a whole younger generation, if they do a genre like the desert-island cartoon, it will be in a very ironic way.

Is there anyone generally considered the master of the desert-island cartoon?

I think it’s in everyone’s palette.

For more, check out The New Yorker’s Cartoon Bank, where you can find pretty much any cartoon that ever ran in the magazine. You can even search for “cannibal pots.”
Published by Bado at 4:00 AM