From the Hollywood Reporter. 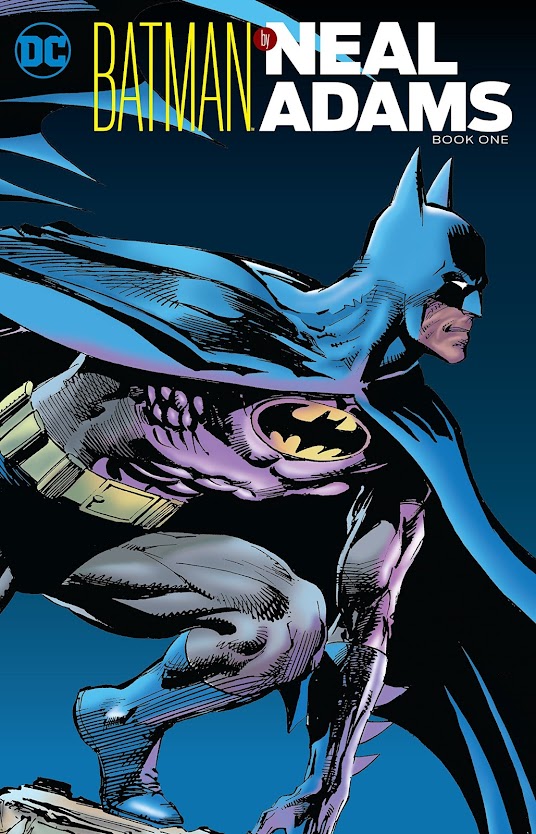 Neal Adams, the legendary comic book artist who reinvigorated Batman and other superheroes with his photorealistic stylings and championed the rights of creators, has died. He was 80.

Adams jolted the world of comic books in the late 1960s and early ’70s with his toned and sinewy take on heroes, first at DC with a character named Deadman, then at Marvel with X-Men and The Avengers and then with his most lasting influence, Batman.
During his Batman run, Adams and writer Dennis O’Neil brought a revolutionary change to the hero and the comics, delivering realism, kineticism and a sense of menace to their storytelling in the wake of the campy Adam West-starring ’60s ABC series and years of the hero being aimed at kiddie readers.

He created new villains for the rogue’s gallery — the Man-Bat and Ra’s al Ghul as well as the latter’s daughter, Talia, who became Batman’s lover. The father and daughter, played by Liam Neeson and Marion Cotillard, were key characters in the trilogy of Batman movies directed by Christopher Nolan.

The Batman run also revived some villains who had grown stale, no more so than the Joker, who became less comical and more the homicidal maniac that modern readers and moviegoers know and love, truly taking his place as the Caped Crusader’s archnemesis. 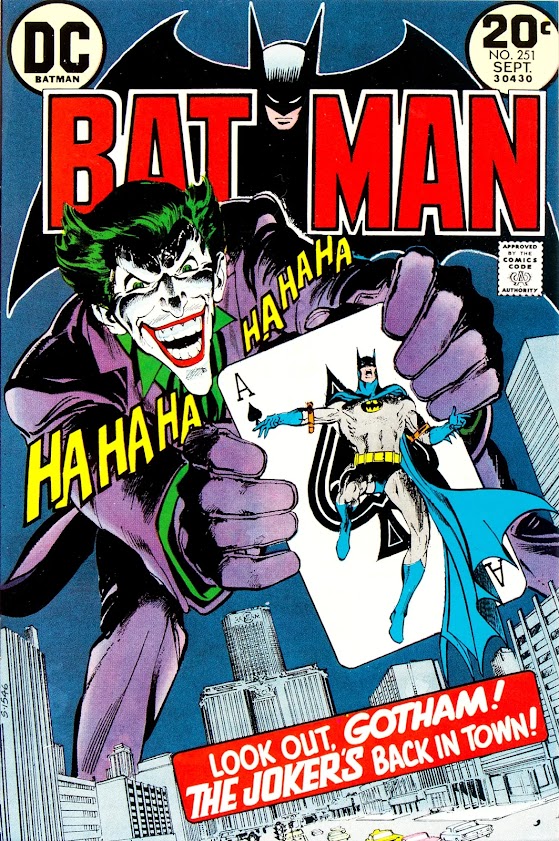 “We took a harder edge. We decided that Joker was just a little crazy,” Adams told Abraham Reisman for a 2019 Vulture article that made the case that without that classic story, 1973’s “The Joker’s Five-Way Revenge” in Batman No. 251, comics such as The Killing Joke and portrayals by Jack Nicholson, Heath Ledger and Joaquin Phoenix would not exist.

“It was no secret that we were doing Batman right,” Adams said during a panel at San Diego Comic-Con in 2010. “It was as if the memory of DC Comics went along with the statements that both Denny and I were making, that we want it to be more realistic, more gritty. And that’s how we remember — whether it was true or not — that Batman should be. And when we did it, everybody went, ‘Ah, that’s it. We don’t need comedy anymore.'” 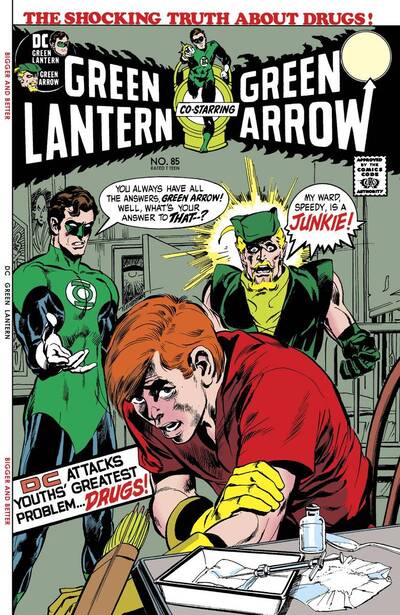 Adams, also with O’Neil, came up with a then-controversial turn for Green Lantern/Green Arrow, tackling social issues such as drug addiction, racism and overpopulation and creating the Green Lantern hero, Jon Stewart, who became one of DC’s first Black icons. Their 1971 two-part story “Snowbirds Don’t Fly” remains a watermark in the evolution to more mature readers.
It was at this creative height in the mid-’70s that Adams quit drawing for the Big Two, as DC and Marvel were known, and launched Continuity Studios, an artists studio that produced comics, commercial art and storyboards, among other services. The comics division created indie characters such as Bucky O’Hare and Ms. Mystic.

He also proved to be an influence on generations of artists, giving many a boost or break into the industry. He acted as mentor to Bill Sienkiewicz, who would draw an influential run of Moon Knight and New Mutants, and Frank Miller, who would more than a decade later reinvent Batman himself with The Dark Knight Returns.

“It wasn’t until I sat at tables at conventions next to the same people I would watch treat my father with such reverence that I understood: He was their father, too,” his son Josh Adams said in a statement to THR. “Neal Adams’ most undeniable quality was the one I had known about him my entire life: He was a father. Not just my father, but a father to all that would get to know him.”

Adams also worked tirelessly to promote better working conditions and, radically at the time, creators’ rights, especially for their work. He early on recognized the value of creators and was a thorn in the side of publishers, demanding compensation for himself and others when their characters were adapted off the page.

He, along with Stan Lee, formed the Academy of Comic Book Arts, hoping to start a union that would fight for benefits and ownership on behalf of writers and artists. Lee wanted an organization that was more akin to the Academy of Motion Picture Arts and Sciences, and the two parted ways.

In the late ’70s, when a new federal work-for-hire law was being enshrined, Marvel and then editor-in-chief Jim Shooter distributed contracts that stated freelancers could not assert copyright over their creations.
As detailed in Reisman’s 2021 Lee biography, True Believer, Adams sent around a copy of the contract, scrawling on top, “Do Not Sign This Contract! You Will Be Signing Your Life Away!”
While it caused a ruckus and awareness, the effort didn’t have its intended effect as Marvel flexed its muscle and threatened anyone who tried to unionize with a drying up of the freelance well.
Adams had more luck in taking on corporate overlords in two other areas. He helped change the practice of comic book publishers keeping the original art by artists or even shredding and tossing it, influencing companies to establish policies of returning the art, something that allowed artists to enjoy a second income stream.
The biggest case in point: Marvel returned pages of art to Jack Kirby, the co-creator of Fantastic Four, Thor, X-Men and Hulk.

He also proved to be a champion of two writer-artists who laid the foundation for DC, Superman creators Jerry Siegel and Joe Shuster. When he learned of their plight — one inciting factor was hearing that they could not attend a Broadway musical featuring the Man of Steel — he led a lobbying effort that eventually led to greater recognition for the pair, a creator tag in comics and other media that continues to this day, plus a pension.
Adams was born in New York City on June 15, 1941, and attended the School of Industrial Art in Manhattan. He set his sights on comic books early, and while he kept getting rejected from DC in the late ’50s, he did humor gags for Archie Comics.
He also worked in commercial advertising, bringing a comics art style to his efforts, which would later influence his DC and Marvel work and help him stand out. Adams also worked for several years in the ’60s on a daily comic strip featuring Ben Casey.

By the end of the decade, he finally landed at DC, at first doing covers, then back-up stories, then finally the main stories. When he was assigned Deadman in the title Strange Adventures, he had pretty much established his style, and it was only a matter of time before the industry noticed.
Deadman became a surprise hit and earned him an Alley Award for “for the new perspective and dynamic vibrance” he brought to the medium.

During the Batman heyday, when Adams was blowing readers’ socks off on a monthly basis, he also was causing a stir in the DC offices with his art.

“In those days, if the work came in early enough, it would sit in flat files in production for maybe three or four weeks before anyone would actually pick it up and do the lettering corrections,” then-editor Paul Levitz recalled at the 2010 Comic-Con panel.
“The great books that would always come in, people would come and they would look at it. And when they would come in to deliver their art, they’d stop off in production, [saying,] ‘Do you have Neal’s last job?’ or ‘Let me see what’s in the Detective drawer.’ And that becomes a ‘Can you top this?'” 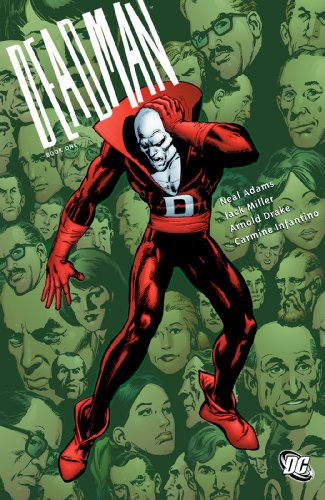 “My father was a force,” Josh Adams said. “His career was defined by unparalleled artistic talent and an unwavering character that drove him to constantly fight for his peers and those in need. He would become known in the comics industry as one of the most influential creators of all time and champion social and creators’ rights.
When he saw a problem, he wouldn’t hesitate. What would become tales told and retold of the fights he fought were born out of my father simply seeing something wrong as he walked through the halls of Marvel or DC and deciding to do something about it right then and there.”

The artist also understood the value of fan support and was a fixture on the convention scene, where he was lovable, cantankerous and a repository of comic book history who loved being a raconteur.

In addition to his wife of 45 years and Josh, survivors include two other sons, Jason and Joel; daughters Kris and Zeea; grandchildren Kelly, Kortney, Jade, Sebastian, Jane and Jaelyn; and great-grandson Maximus.

His three sons and Zeea work as artists in the comic book or fantasy field.
Published by Bado at 12:00 AM