From The Moscow Times. 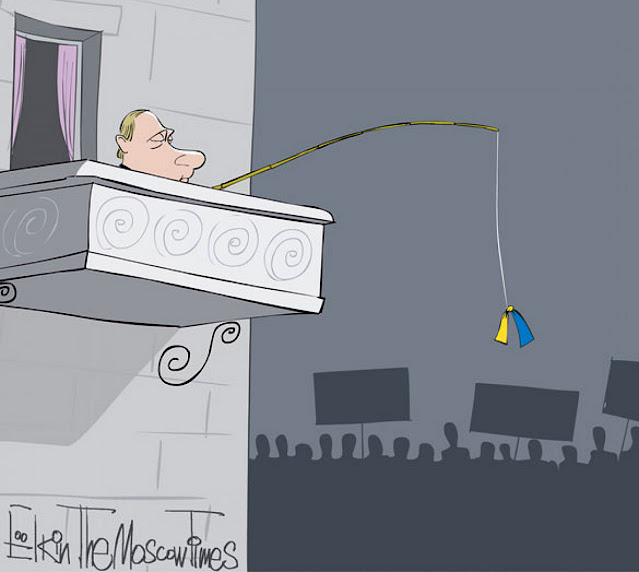 Russia’s most prominent political cartoonist Sergei Elkin announced Wednesday that he had left Russia amid a wartime crackdown on journalism. He is now in Bulgaria.

Over the years, Elkin has lampooned politicians, businessmen, and international elites in media outlets across the world — including The Moscow Times, who published his series, “Putin’s Russia” in print and online.
New laws passed after Russia’s invasion of Ukraine on Feb. 24 stipulate that anyone found guilty of spreading "fake news" can face up to 15 years in prison.

“I left Russia. The border guard did not want to let me go like Lao Tzu,” he wrote on Facebook.
“But now I'm in Bulgaria. The future is unclear."
Elkin first entered journalism in the 1990s as an editor at a newspaper in Voronezh, located about 500 kilometers south of Moscow. When the newspaper ran short of content to fill its pages, Elkin tried his hand at drawing political cartoons. He has named Mikhail Zlatkovsky and Viktor Bogorad, who has drawn for the opinion pages of The Moscow Times, as influences.
He produces his cartoons on a computer with the help of a computerized drawing pad. In a 2014 interview, Elkin said his cartoons generally reflected his own personal opinions on politics, but that he also created special work when asked to draw about a particular subject.
"His most frequent subject is Putin, whose face he has drawn to the point of boredom," The Moscow Times wrote of Elkin in 2014. "You need to portray this man who has studied judo … who has encountered Japanese philosophy — his face should reflect no emotions," Elkin said. "You need to show a man with an upstanding appearance and expression, who at the same time is internally prepared for all kinds of serious, harsh measures."
Elkin's series for The Moscow Times is heavily influenced by the events of that time: Russia's annexation of Crimea and backing of pro-Moscow separatists in the Donbas. It is difficult … you need to find something that will not make fun of people's feelings," Elkin said of his illustrations.
Published by Bado at 5:31 PM