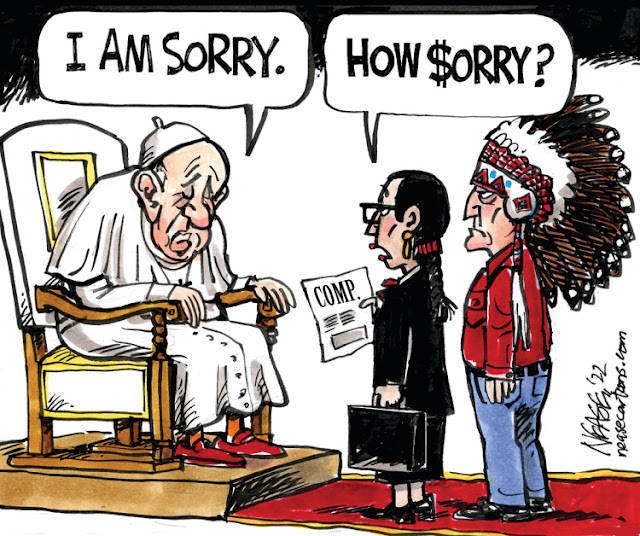 First Nations leaders in southern Ontario say the media has to do better at reconciliation after a newspaper ran an offensive cartoon depicting Indigenous people asking the Pope for financial compensation.

"You can't speak out of both sides of your mouth — to Indigenous people one way, and then what you print to the general Canadian population," said Laurie Carr, chief of Hiawatha First Nation.

Metroland Media's seven Simcoe County newspapers ran a cartoon last week that pictured the Pope saying "I'm sorry" to what appears to be an Indigenous woman and man, who respond "How $orry?"

Carr, who sits on one of Metroland Media's advisory councils in Peterborough, said "it's really disturbing" to see a cartoon published like that in 2022.
"When you have Metroland Media who has reached out to Indigenous people to sit on these advisory committees … to work together and to bring a better media and the truth to the general Canadian population … it's really disheartening," said Carr.

Metroland Media is a subsidiary of the Torstar Corporation, and has newspapers in the Simcoe County communities of Alliston, Barrie, Bradford and West Gwillimbury, Collingwood, Innisfil, Midland/Penetanguishene, Orillia and Stayner/Wasaga.
Editor's apology

When contacted for comment, Adam Martin-Robbins, Metroland's managing editor for the Simcoe County newspapers, directed CBC News to a column he wrote that was published on Simcoe.com on Monday.

"The cartoon we published on the editorial page in our seven local newspapers last week was offensive, and we apologize," Martin-Robbins wrote.

"We apologize, in particular, to our Indigenous readers including our Beausoleil First Nation and Rama First Nation neighbours as well as the Métis residing in Midland and surrounding communities. We recognize the generational trauma of the atrocities related to the residential school system."
He wrote that the cartoon, which was drawn by Steve Nease, "was intended as a satirical look at how the Pope's long-awaited apology to Indigenous people falls short without the Roman Catholic Church also delivering on its promise of providing compensation to residential school survivors.
But this wasn't the way to depict that opinion and we shouldn't have published it."

Nease wrote in an email to CBC News that he believes a papal apology is the first step toward righting the wrongs that residential school survivors faced from the Catholic church and that the Pope should "put his money where his mouth is, and compensate victims financially."

"I know that many have been offended by my cartoon, and I regret that deeply," Nease wrote.

"It was never my intention, or the intention of the newspaper that ran it, to cause such hurt."

Carr said she is thankful for an apology, but would have preferred it be just an apology, rather than explain the intention behind the cartoon.
News needs more historical context

Reg Niganobe, grand council chief of the Anishinabek Nation whose members include some First Nations in Simcoe County, said cartoons like that reinforce a stereotype that Indigenous people are only out for money when something bad happens.

"Money is the only compensation that can be offered to us at the very least, other than maybe jail time or prosecution for the offenders. But that doesn't address the issue of what happens to our people," said Niganobe.
Niganobe, whose father attended the Spanish Indian Residential School, said he accepts the editor's apology but would like to see media take actions moving forward like including more historical background when reporting on Indigenous issues.

"They leave out the historical context, right?" he said.

"They leave out all the information and all the facts that exist within them and it puts Indigenous people in a very poor light."

Martin-Robbins wrote in the column that the newspaper has reviewed its processes and added an extra layer of review and oversight for its editorial page content.
He also wrote they are committed to ongoing training focused on anti-oppression, anti-racism and inclusion and diversity, among other things.
Published by Bado at 12:00 AM