Gado's concern has shifted to the coronavirus 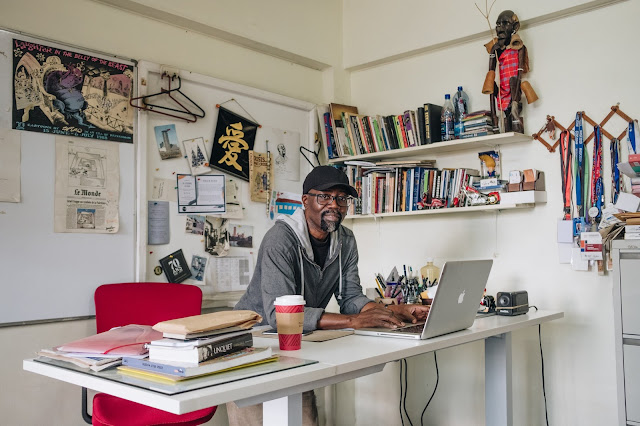 In a quiet office on the third floor of a building in Nairobi’s central business district, the cartoonist known by his pen name, Gado, was sketching a satire about the coronavirus.

Titled “Conspiracy Inc.,” it parodied the unfounded claims that have exploded about the pandemic, which has killed nearly a quarter-million people in 177 countries. 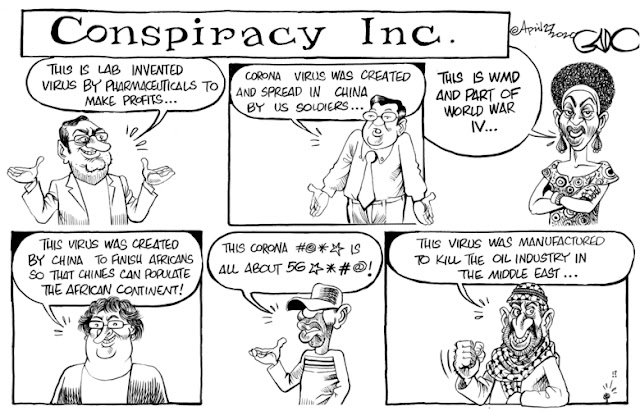 He depicted men and women promoting claims that pharmaceutical firms invented the virus, and American soldiers spread it in China, and that the Chinese government wants to use it to depopulate and conquer Africa.

As African worries about the disease have escalated in recent weeks, Gado, whose real name is Godfrey Mwampembwa, has taken to producing cartoons that are cutting and inventive but also instructional and informative.

“I kept thinking, ‘How am I going to contribute to educating the masses?’” Gado said one recent afternoon, as a squall blew through the streets of Nairobi, desolate and nearly empty from the government-ordered lockdown.

“This is the time when satirists and writers need to be at their utmost vigilance,” he said. “We should not let our foot off the gas because it’s very important that we ask tough questions.”

Gado, 50, is one of Africa’s leading editorial cartoonists. A native Tanzanian who calls Kenya his home, he has won awards and been syndicated in newspapers and digital publications worldwide.

In a career that has spanned three decades, his drawings have touched on everything from corruption and terrorism to revolutions, migration, religion and climate change. 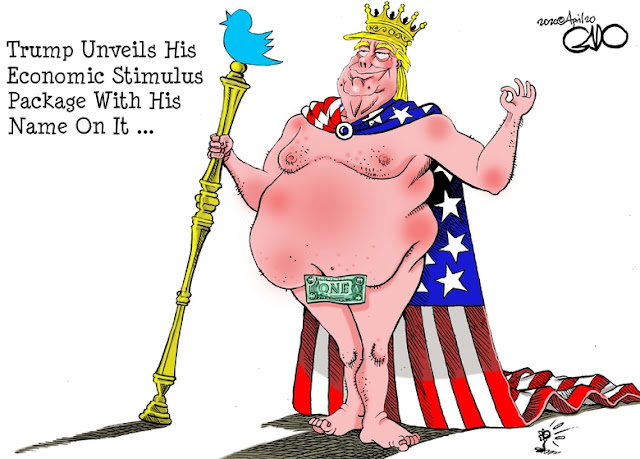 Working mostly in pen and ink, he has derided local politicians, poked fun at dictators and democrats alike, singled out companies like Uber for profiteering from drivers, portrayed President Trump as a naked emperor and examined China’s deepening role in Africa.

Altogether, the sketches have engaged — and occasionally enraged — audiences and lawmakers, and incubated important public debates across Africa.

But as the coronavirus spreads, Gado, who sports a salt-and-pepper goatee and speaks with a deep voice, is rethinking the role and place of cartoons in these uncertain times.

Beyond provoking thoughts and ideas, Gado said, he wants to use the shared experience of pestilence not only to shape conversations but also to make sense of the moment and keep people safe.

Gado said he particularly wants his audience — hundreds of thousands of followers on Twitter, Facebook and Instagram — to connect the dots on how poor leadership and cronyism might have contributed to the failures laid bare by the pandemic.

His illustrations, as such, have partly become instructive, teaching viewers to sanitize their hands and practice social distancing. 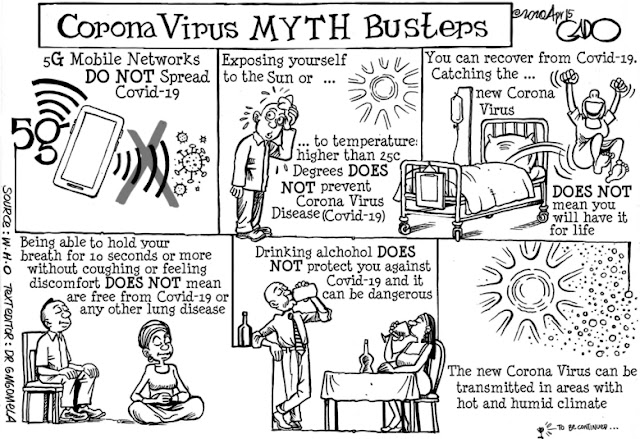 In a series titled “Myth Busters,” he notes that Covid-19, the disease caused by the virus, doesn’t spread through 5G data networks, that taking hot baths will not stop the virus and that drinking alcohol — promoted by Nairobi’s governor — is not a treatment or cure. 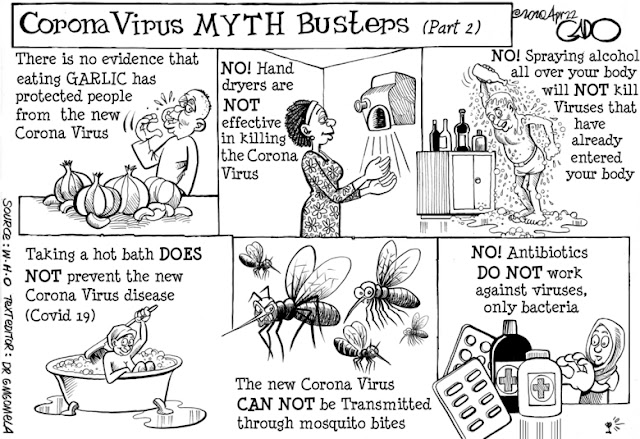 The satirist has also not forgotten his favorite target: politicians. Gado has sketched how the political elite in Kenya — often caricatured as plump with a hyena’s head or wearing a crown — have overseen an embattled health system, unleashed police brutality during curfew hours and planned to use the pandemic as a way to line their pockets and dupe international donors.

Gado admitted it’s a challenge to provoke and criticize at a time when leaders are scrambling to contain the spread of the virus.

Yet, he said, he takes pains to avoid sending the wrong message.

Gado was born in the Tanzanian port city of Dar es Salaam, where his mother was a teacher and his father worked for the country’s tourism agency. He said his parents had encouraged his passion for drawing and even enrolled him in a high school that offered an arts curriculum.

Besides the copies of Newsweek and Time magazine his father would bring home, he grew up reading Tintin and Asterix comics, he said.

Gado first came to Nairobi in 1992 to collect a prize in a drawing competition. Even though he was studying architecture in Dar es Salaam, and had promised his parents he would return to complete his education, he never did.

Instead, he persuaded the editors at Kenya’s biggest newspaper, The Daily Nation, to hire him.

Gado arrived at a crucial year, when Kenya was holding its first multiparty elections since independence. As an outsider and a beginner, he had quite a learning curve.

“I had to become a professional while on the job,” he said.

In the late 1990s Gado spent a year in Italy working under Oliviero Toscani, the former art director for the United Colors of Benetton clothing company, and another year studying classical animation and film at the Vancouver Film School.

As his cartoons became a staple in Kenyan and regional newspapers, Gado became a target of criticism, with local politicians, embassy officials from China, Zimbabwe and more recently the United States taking shots.

Few leaders, he said, have taken his cartoons in stride. Fortunately, those who have, like Kenya’s former chief justice Willy Mutunga, and the former secretary general of the United Nations Kofi Annan, have provided a degree of insulation from the others.

But not entirely. In 2015, Gado’s cartoons in The East African newspaper led to its banning from Tanzania and his eventual dismissal in 2016 from its sister newspaper, The Daily Nation, which no longer runs his cartoons.

While the Daily Nation management said the decision was a standard contractual parting of ways, the cartoonist attributed his ouster to pressure from government officials.

Gado has collected some of his works from The Daily Nation in books including “Freedom After Speech” and “DemoCrazy.” 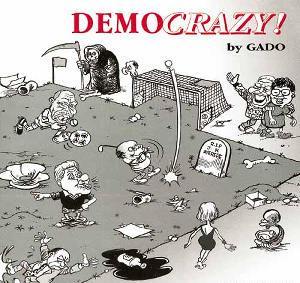 “It was a privilege to work at The Daily Nation,” he said, reminiscing about the heady days when he worked alongside top journalists and editors.

“It’s the manner in which I left The Nation that left a bad taste for me,” he said. “The political interference became too apparent. It became too difficult.”

These days, Gado’s routine, much like everyone else’s, has been disrupted.

While he sometimes sneaks into his office, he mostly works from home, having commandeered the family’s dining table, to the chagrin of his wife, Stephanie Uwingabe, a human resource specialist from Rwanda, and his two daughters, Mwaji-Odeta, 16, and Keza-Anganile, 14.

Gado describes himself as a “true East African.”

Many projects at the firm he co-founded, Buni Media, have also been put on hold, including the popular satirical The XYZ Show featuring latex puppets.

In the face-off between human and microbe, Gado said he was more determined than ever to use his cartoons to make audiences not only laugh and think, but reimagine their world. If he can challenge people’s perceptions and bring about even a bit of change, he said, that will be the “ultimate joy.”


A version of this article appears in print on May 2, 2020, Section A, Page 19 of the New York edition with the headline: Dispelling Rumors and Bucking Authority While Getting a Laugh.