Bill Ramsey in the Chattanooga Pulse.

Calvin Sanford Huffaker Sr., known as Sandy, a highly-acclaimed political satirist and painter, passed away peacefully at his home in Raphine, Va.

During one week at the peak of his career as an illustrator, Sandy Huffaker had assignments from Time, Sports Illustrated and Business Week.

He had to turn down a fourth assignment that week from Newsweek. “I just didn’t have time,” says the Chattanooga-born artist during a phone interview from his home in tiny Raphine, Va.

The 1970s were the “glory days,” Huffaker says, for himself and a stable of talented illustrators whose work routinely found itself on the covers of the nation’s premier newsmagazines and in the pages of The New York Times.

For the better part of that decade, Huffaker was among an elite breed of commercial artists—his hero and fellow Southerner Jack Davis, the legendary Mad Magazine illustrator, among them—working during a remarkable period when art directors routinely turned to illustration to give comic relief to the country’s deeply serious and dark problems.

From civil rights and the women’s movement to Vietnam and Watergate, the gas crisis and inflation to the rise of Jimmy Carter, Huffaker mined a deep well of material ripe for his brand of visual wit and caustic satire.

“All that work has gone away,” Huffaker says, somewhat ruefully. But it was a damn good run and, he says, an era for illustrators that may never come again. It didn’t come easy even then, Huffaker admits, but with changes in technology, the turn towards photography and computer graphics, art directors adopted new directions and never looked back.

“I doubt any artist could expect that kind of work these days,” Huffaker says.

Huffaker’s work and style were a culmination of his years spent as an illustrator and political cartoonist for newspapers in the Deep South.

Born in 1943 into a staunchly conservative family, Huffaker says he didn’t have any political leanings until he escaped Chattanooga after six years of military school at McCallie.

His talent and inspiration as a cartoonist until then had been drawn from the sometimes subversive Mad Magazine, but it was his experience as an undergraduate at the University of Alabama that awakened the Liberal lurking within. “My father went to Annapolis (the U.S. Naval Academy)” says Huffaker. “He just didn’t understand.”

Arriving in Tuscaloosa at the height of the civil rights movement with then-Gov. George Wallace defying the federal government’s insistence that Alabama’s state-run universities open their doors to Blacks, Huffaker and his future wife witnessed first-hand the raw racism of Wallace and much of the South as the governor’s tactics became a national disgrace.

Huffaker had seen enough and his political identity began to emerge, but he found his first real job not far away at The Birmingham News, where he cut his teeth as an illustrator on the newspaper, penning illustrations for the daily paper and its Sunday magazine.

After two years, Huffaker was determined to leave the South and pined for the big leagues, bright lights and the promise of fame in New York.

He sent his portfolio to Maurice Sendak, the legendary “Where The Wild Things Are” illustrator to guage his prospects, and when Sendak replied, “C’mon up, you’ll do all right,” Huffaker wasted no time. “I had a wife and two kids,” Huffaker recalls. “It was the ballsiest move I ever made.”

Timing and talent were on Huffaker’s side. The artist scored two book assignments during his first week in New York that helped him survive the initial shock and boosted his name recognition. Other assignments soon followed and Huffaker took his place among the nation’s most in-demand illustrators.

But New York was not all glamour. His wife was almost raped and the gritty reality of the city forced him to consider a less volatile environment.

At the end of the 1960s, Huffaker joined The Raleigh (N.C.) News & Observer as that paper’s first editorial cartoonist.

Under Claude Sitton, a former New York Times correspondent, the paper became a government watchdog, earning it the nickname of “The Nuisance and Disturber” from the region’s conservative base.

But the experience was transforming for Huffaker. During his three years at the paper, Huffaker says he earned the equivalent of a PhD in politics and civil rights.


Returning to New York via his new home in Princeton, N.J., Huffaker renewed his relationships at magazines and newspapers, quickly gathering assigments for The New York Times “Week in Review” section and Time’s “Americana” page.

For the next 15 years, Huffaker’s illustrations appeared almost everyhere—on magazine covers, record albums and books—racking up industry and professional awards and the praise of art directors. “Sandy is one of the heavies in cartooning in America ... his stuff can be devastating,” says former New York Times art director Eric Seidman. “His understanding of politics is amazing.”

When magazines and newspapers turned away from illustration, and Huffaker’s own creative juices began to ebb, he turned to book illustration and fine art. He wrote two well-received books of his own during the 1980s and illustrated dozens of others before moving to Santa Fe, N.M., to open his own gallery.

“Cartooning was always considered a lowly art, but I knew it could make the leap to fine art if it was done right,” he says.

Despite stellar reviews and shows across the country—including a one-man retrospective at the Hunter Museum in Chattanooga—Huffaker closed his gallery and moved to Virginia to pursue his art and freelance illustration career. “It was the first time I felt I had failed, and it hurt a lot,” he says. 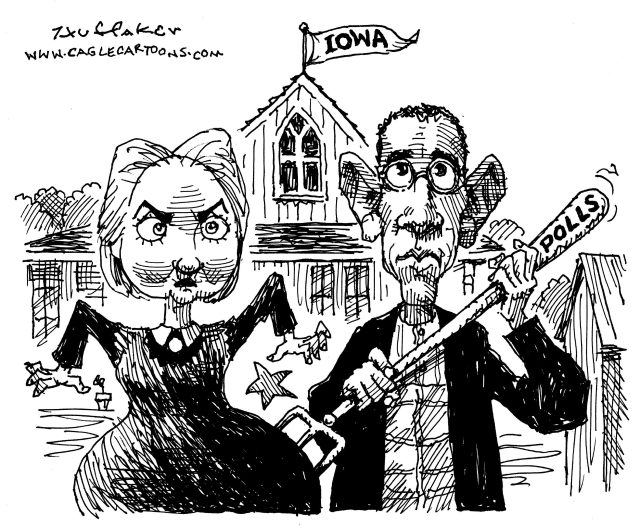 Distanced from politics for some 20 years, Huffaker says the events of 9/11 revived his political cartooning career, which continues to this day. His work is syndicated to hundreds of newspapers and magazines around the world, but he maintains a slower pace, reflecting the calm nature of his life in rural Virginia.

Ever the reluctant Southerner, Huffaker says he has largely come to peace with his home, though Virginia, he says, is South enough and he rarely returns to Chattanooga. 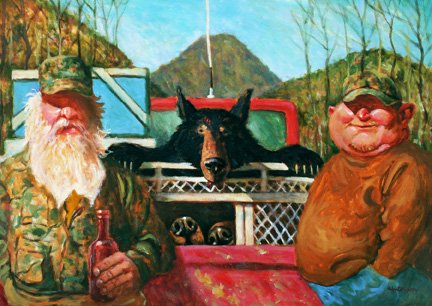 In 2009, reconnecting with his Southern roots and humor, he wrote and illustrated “Portrait of the Artist as a Young Redneck,” a tongue-in-cheek, slice-of-life tale that is less memoir than a recognition of all he finds palatable about the South.

“I would be one of the people in your series (Local Boy Done Good) who never returns,” Huffaker says, with a laugh. “But a couple of years ago, I was hanging out in a local bar with some rednecks. I’d always wanted to write a novel and I missed a lot of things about the South. The book was the result. I guess you could call it less of a novel than a slice of life,” he says. 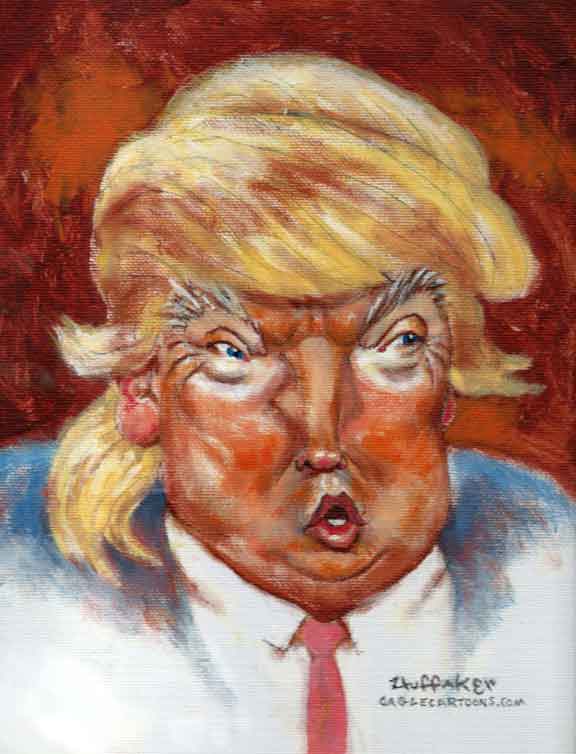 He spent his last 17 years in Raphine, Va., painting and drawing all the while in the Shenandoah Valley where he fell in love with the landscape and people of the area.

A private graveside service will be held at Forest Hills Cemetery at a later date.

Obituary in The Chattanoogan.
Published by Bado at 12:00 AM