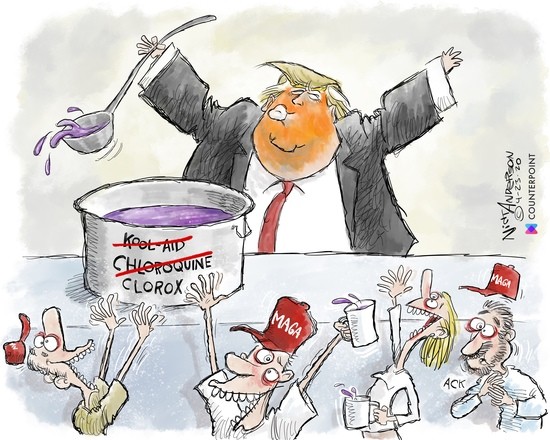 Thanks to CBLDF and our coalition partners, the online marketplace Redbubble has reinstated a cartoon by Pulitzer Prize–winning editorial cartoonist Nick Anderson that was previously removed because of a meritless complaint by the Trump re-election campaign.

CBLDF applauds Redbubble for reinstating the cartoon, and urges them to reject any other attempts by political campaigns to suppress protected speech.

Redbubble restored the cartoon on Wednesday morning, and acknowledged that its removal was an error in a Tweet:

In a statement to CBLDF, Nick Anderson said:

I am pleased that Redbubble reversed their decision. I applaud them for this and for recognizing that it was an error.

Still, there are some troubling issues raised.The cartoon was removed less than 24 hours after I posted it. I hadn’t gotten a single order for it. I doubt anyone had even seen it yet on the Redbubble site.

This reveals that the Trump campaign has a system in place, trawling for material they find objectionable. If it happened to me so quickly, it likely has happened to others. How much other content has been removed this way on Redbubble and other sites?

Also, when I received the first notice of the take down, I followed Redbubble’s instructions to protest the decision. I honestly thought the original decision was probably made by some underling, with little knowledge of copyright or trademark law, or perhaps it was even made by a bot without human eyes evaluating it.

It took more than a week before Redbubble responded (in contrast to the quick response for removal). I was quite surprised that Redbubble didn’t reverse the decision. In fact, they doubled down and refused to reinstate the work.

It was only after the Comic Book Legal Defense Fund intervened on my behalf – and the letter written by CBLDF started getting viral attention on social media – that Redbubble reversed their decision.

In the end, I recognize that Redbubble did the right thing.
But it must be pointed out; the President of the United States is a hypocrite who complains about the “violation” of his free speech on Twitter, then tries to actively suppress the free speech of others. These are actions of an adolescent, wannabe-authoritarian.

“Our letter articulates the case law in clear terms to help prevent future censorship of this nature. We’re pleased that Redbubble has done the right thing in this case. We hope that they will continue to assert the First Amendment rights they and their sellers are guaranteed by rejecting any similar censorship attempts.”

CBLDF is a non-profit organization that needs your help during these difficult times!

Help support CBLDF’s important work by sharing this article.
You can also donate to support our efforts by visiting the Rewards Zone, making a donation, or becoming a member of CBLDF!