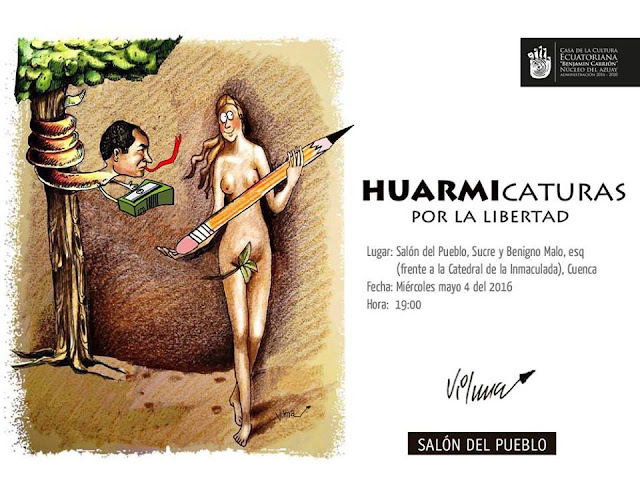 Ecuadorian artist Vilma Vargas is protesting the censorship of an exhibition of her paintings and cartoons.

The head of Ecuador’s government-funded cultural organization, the Casa de la Cultura Ecuatoriana (CCE), has refused to publish a catalogue to accompany the exhibition of 50 of Vargas’ works.

The catalogue included reference to civil rights abuse by the government of President Raphael Correa. CCE Chairman Iván Petroff also prevented the titles and contextual information to be displayed alongside the pictures and paintings. 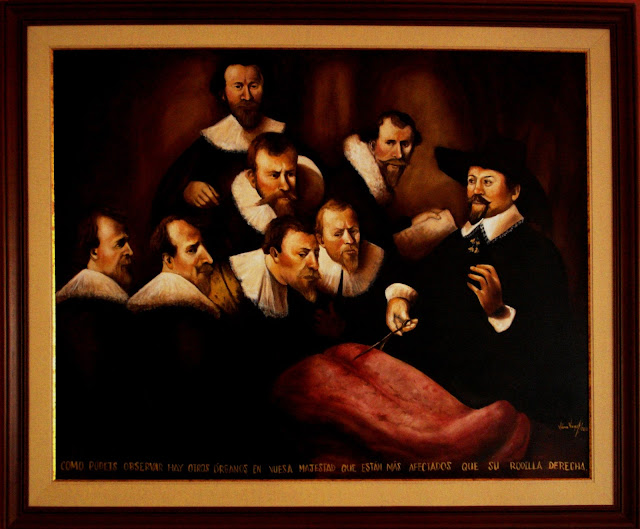 The exhibit’s theme is Freedom of Expression/Freedom of Opinion.

The video component planned for the exhibition, which included animations, was removed. The show, Huarmicaturas, por la libertad, opened May 4, World Press Freedom Day. Ms. Vargas was informed that elements of the exhibit would be censored the day before.

In a Kafkaesque denial, the CCE claimed it prohibited background and contextual information from accompanying the artwork merely to prevent the exhibition from becoming

“a forum for opinion and political criticism, thereby undermining the institutional mission and vision of the CCE to promote, support and sponsor the works and artists without any bias involving . . . political positions of any kind.”

Vilma Vargas has been producing political cartoons for 21 years, most recently for the newspaper Hoy, which folded two years ago under pressure from Ecuador’s repressive Communications Law.

Last year, someone went to great effort to break into Ms. Vargas home, though nothing was taken.
Ms. Vargas interpreted the break-in as a message of intimidation. Her cartoons often target the government of Ecuador’s President Raphael Correa.

Vilma Vargas exhibition Huarmicaturas, por la libertad will be on display until May 31 at the People’s Hall of the CCE, Núcleo del Azuay in Quito.
Published by Bado at 1:00 AM