Mell Lazarus passed away on the morning of May 24, 2016, at his home in Woodland Hills, CA.

He is best known as the creator of two comic strips, Miss Peach (1957–2002) and Momma (1970–present). For his comic strip Pauline McPeril (a 1966-69 collaboration with Jack Rickard), he used the pseudonym Fulton, which is also the name of a character in his novel, The Boss Is Crazy, Too.

A native of Brooklyn, Lazarus began as a professional cartoonist when he was a teenager. During his twenties, he worked for Al Capp and his brother Elliott Caplin at the Capp family-owned Toby Press, which published Al Capp's Shmoo Comics, among other titles. 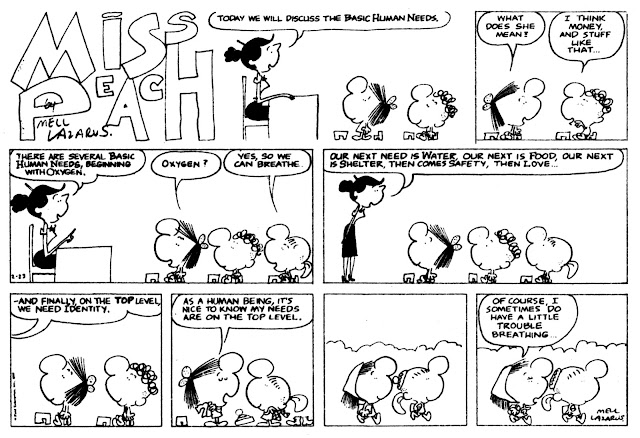 In 1964, Lazarus talked about his background and working methods:

I never actually graduated high school. My art teacher flunked me. I have since, however, attended many classes of one kind or another. I frequently lecture at colleges and to other groups around the country. I sold my first cartoon when I was 16. I did commercial art and edited children’s magazines prior to February 4, 1957 when my comic, Miss Peach, was launched.

The characters in Miss Peach are not actually modeled on real persons, with the possible exception of Lester, the skinny kid in the strip. Possibly the most loved character is Arthur, the dopey little kid. I make notes all week based on thoughts, conversational fragments, etc. I sift through all these notes on Monday mornings and select several to develop. I then write gags for them. I do six daily strips and a Sunday page.

He was given the Reuben Award for Outstanding Cartoonist of the Year for his work on Miss Peach in 1981, and he received their Silver T-Square Award in 2000.

"RIP, Mell Lazarus: Colleagues salute the warm wit of the ‘Momma’ and ‘Miss Peach’ comics creator"
Published by Bado at 1:00 AM