From the Doug Wright Awards blog

The winner of the 2016 Doug Wright Spotlight Award is:

Dakota McFadzean for Don’t Get Eaten By Anything (Conundrum Press)

And the winner of the 2016 Pigskin Peters Award is:

The ceremony was attended by a Who’s Who of the Canadian comics scene, including Chester Brown, Kate Beaton, Jillian Tamaki, Joe Ollmann, Michael Deforge, Kat Verhoeven, publishers Annie Koyama, Tom Devlin, and Peggy Burns among others. 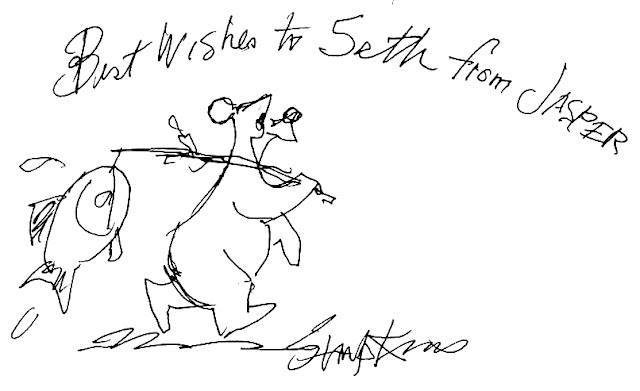 The evening also saw the induction of James Simpkins (1910 – 2004) into the Giants of the North Hall of Fame. Simpkins was a multi-faceted artist, filmmaker (with the National Film Board) and cartoonist who contributed hundreds of one-panel “gag” comics to dozens of magazine over the course of his nearly 50-year career. He is best remembered for creating the character Jasper the bear for Maclean’s magazine in the 1940s. “Jasper” ran in Maclean’s for 20 years, appearing on the cover several ties, and became a part of Canadian folklore thanks in part to his charm, wit and bruin-like personality.

Along the way Jasper also became a marketing phenomenon with little precedent in the history of Canadian comics. In addition to an internationally syndicated newspaper strip, Jasper was licenced for countless products including kids’ ball-caps, t-shirts, souvenir pennants, collector spoons, Frisbees, salt-and-pepper shakers, and a line of toys. But perhaps his most lasting legacy is the 10-foot “life-size” statue of Jasper that stands to this day in Jasper National Park in Jasper, Alberta.

Sandra Boyle, Simpkins’ daughter who was at his side when he died, accepted the Giants of the North medal and certificate on her father’s behalf.

The ceremony also featured a memoriam to Canadian cartoonist Darwyn Cooke and comics publisher Alvin Buenaventura, both of whom passed away in 2016.

The 2016 winners were decided on by a jury that included cartoonist Maurice Vellekoop, Globe and Mail columnist Nathalie Atkinson, and Emily Donaldson, editor-in-chief of Canadian Notes & Queries.

The Doug Wright Awards are a non-profit organization formed in 2004 to honour the lasting legacy of the late, great Canadian cartoonist Doug Wright (1917 – 1983), whose strip Doug Wright’s Family ran in newspapers in Canada and around the world from the late 1940s to the early 1980s. Founded in 2004, the annual awards recognize the best and brightest in English-language comics and graphic novels published in the previous calendar year (including first translated editions).

Seth’s Giants of the North speech for James Simpkins
Published by Bado at 1:00 AM