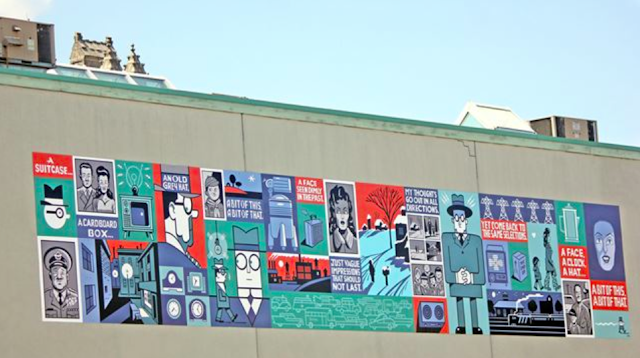 Guelph's newest art installation is a celebration of the city's public life, and one of its best-known artists.
It's called "The Junkyard of Memory," a comic strip that's eighteen metres long by three metres wide and printed on fifteen aluminum panels, which were mounted to the exterior wall of the Bookshelf in downtown Guelph.

"I thought a giant comic strip would be great, something that people could actually read would be interesting, that would appeal to all ages," said Sam Jewell, events coordinator at the Downtown Guelph Business Association.

The piece was designed by celebrated Guelph cartoonist, Seth. The inspiration was drawn from his own life.

"I think people will understand that it's a short piece about memory, and they might be a bit perplexed about how I have put it together and what sort of images I have included," said Seth. "But I also kept in mind that I don't mind people being a bit perplexed by it."

Displaying his work on such a large scale is uncharted territory for Seth, but he says it was important to share it with his home city.

"Guelph has been really kind to me," said Seth. "Guelph has really embraced me, and I feel like a Guelph artist now, and it feels good to be participating in the active life of the community."

Jewell says Guelph has plenty of other blank spaces that could become canvasses as well.

"I want to evoke that emotion in people that they want to come back to this place, because we do awesome things like this," said Jewell. "We're not stopping here. If it is well received, and we're really hoping it will be, I want to do something else — it could be just the beginning."

The official launch was held on Saturday May 28th at the Bookshelf.
Published by Bado at 1:00 AM