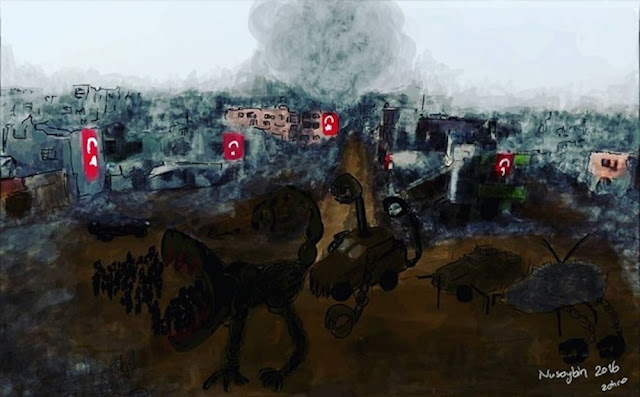 Turkish-Kurdish painter and journalist Zehra Doğan has been sentenced to 2 years, 9 months, and 22 days in prison for creating a painting which depicted the destruction caused by Turkish security forces in the Nusaybin district of Mardin province, a Kurdish region in Turkey.

According to Turkish daily Cumhuriyet, the Mardin Second High Criminal Court in Turkey handed down the sentence because she drew Turkish flags on buildings destroyed by Turkish forces.

However, according to Artforum, the court declared that the fact that Doğan’s shared her work, featuring current military operations, was the cause for her prison sentence.

“I was given two years and 10 months [jail time] only because I painted Turkish flags on destroyed buildings. However, [the Turkish government] caused this. I only painted it,”

Doğan posted the image in a now-deleted tweet as reported by online Turkish journalism and human rights platform Turkey Purge.

According to the Art Newspaper, authorities arrested Doğan at a cafe late July, claiming that her artworks proved that she was connected to the Kurdistan Workers’ Party (PKK), which is considered a terrorist organization by the Turkish government.

“Art and paintings can never be used in such a way,” said Doğan’s lawyer, Asli Pasinli, according to Voice Project, an international organization committed to freedom of expression and creative activism. “This is an attack on art and artistic expression.”
Published by Bado at 12:00 AM