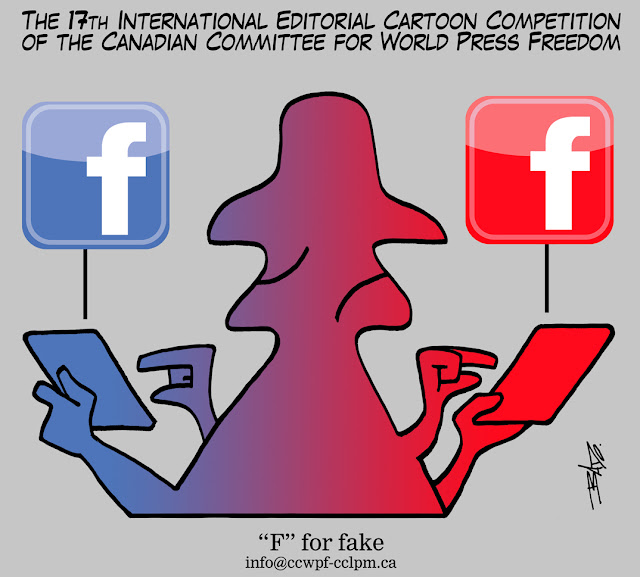 1. The theme for the 17th International Editorial Cartoon Competition is:

Yesterday a global network with libertarian accents, has the Internet become a threat to democracies?Corporate-funded think tanks and fake grassroots groups are now everywhere and consumers often have difficulty in finding the source of the “information” they disseminate.The phenomenon is compounded by the fact that one doesn’t need to actually be where something is happening in order to report on it.
Many have also criticized the role of algorithms used by social networks in limiting debate by enclosing their users in ideological bubbles.

The term “fake news” has further been co-opted as a means of silencing legitimate journalism or criticism, and when confronted by verifiable facts, the term "alternative facts" has even been invoked.


2. Prizes: three prizes will be given: a first prize of $1000 plus a Certificate from Canadian UNESCO, second and third prizes of $500. All sums are in Canadian dollars. Ten additional cartoons will receive an ‘Award of Excellence,’ Regrettably no financial remuneration accompanies the Awards of Excellence.

7. The winners of the Cartoon Competition will be announced at the World Press Freedom Day Luncheon held at the Chateau Laurier in Ottawa, Canada on Tuesday May 2, 2017 as well as being advised by e-mail. The winner’s names and their cartoons will be posted on the CCWFP web site.

The deadline for receipt of cartoons is 5 p.m. GMT, Friday, March 31, 2017.
Send submissions by e-mail to : info@ccwpf-cclpm.ca
Cartoons should be in jpeg format at 300 dpi