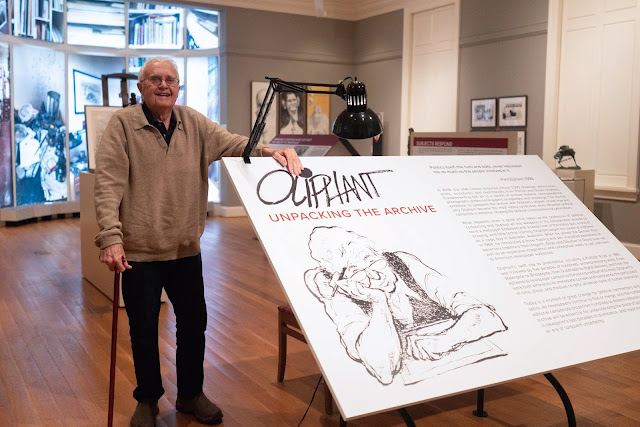 From a watercolor of President H. W. Bush depicted as Mary Poppins to President Barack Obama drawn and sculpted as an Easter Island statue, visitors see the range of political cartoonist Patrick Oliphant’s work in the first tour of his voluminous archive in the University of Virginia’s Albert and Shirley Small Special Collections Library.

Last year, Oliphant donated almost 7,000 drawings, watercolors, prints, sculptures and sketchbooks to the UVA Library. Complementing his exquisite art is a wealth of archival material: some of the scrapbooks in which he began his work every morning, plus correspondence, photographs, professional papers and recordings.

The exhibition, “Oliphant: Unpacking the Archive,” opened this week and will remain on display in the Harrison/Small building’s main gallery until May 30.

“It was like a time machine,” when seeing more than five decades of work, said one of the exhibit’s co-curators, Elizabeth “Beth” Hutton Turner, University Professor of Art History.

This exhibition celebrates the library’s recent acquisition and shows how and why Oliphant became the most widely syndicated, most influential political cartoonist in America.

Panels covering the gallery’s bay window are made of a type of screen that blocks direct sunlight and can have photos reproduced on them. For this exhibit, the panels’ screens recreate his studio at home with photos taken last year.

In front of them stands the only piece on loan from Oliphant (rather than part of the donated archive): one of his drawing boards, which shows his imagination at play. 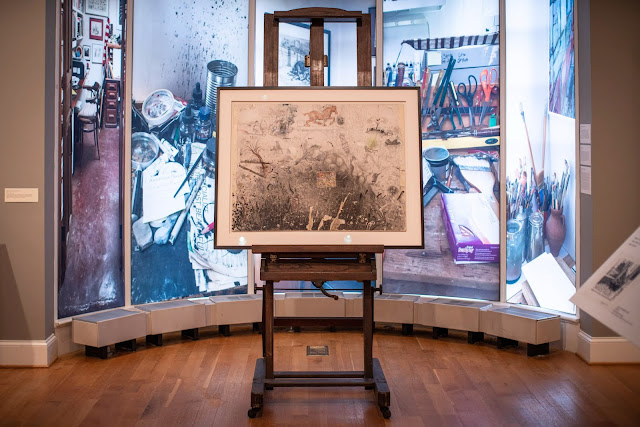 “The exhibit marks a collection of his work that’s never been seen like this before, especially juxtaposing items from his cartoon archive with pieces of art,” library curator Molly Schwartzburg said.

In the multi-disciplinary nature of Oliphant’s practice – where even his cartoons are works of art – viewers can follow his stellar career, she said. They might not realize he also exceled in the fine art media of sculpture and watercolors, transcending the limits of cartoon drawing. 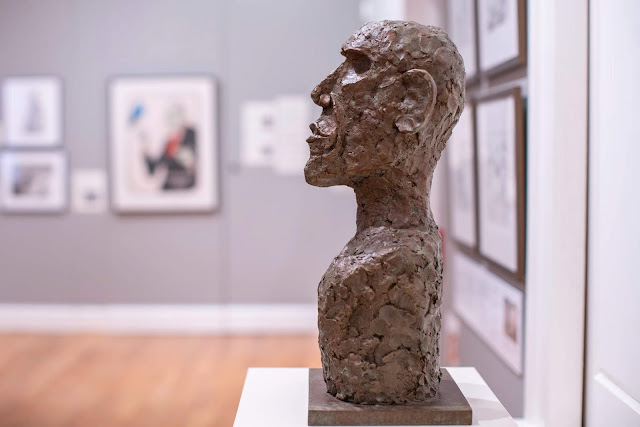 Oliphant and his wife, Susan Conway Oliphant, visited the University from their home in Santa Fe, New Mexico, to see the opening of the exhibit on Monday.

As a conservator and gallery owner, Susan had meticulously archived and organized his work for decades. The couple met in 1988 when she started representing his work, and were married in 1996.

“It’s beautifully done. I can’t think of a time when I’ve seen my work better displayed,” said the 83-year-old artist, who fully retired from political cartooning just five years ago after reducing his daily output in 1995. His career spanned nine presidents, from Lyndon Johnson to Barack Obama.

He’s actually relieved, he said, not having to draw the current president regularly. As witty as ever, he said, “It would’ve been horrible, an embarrassment of riches. I wouldn’t know where to start.”

Oliphant gave some advice to young would-be political cartoonists: Hone your observation skills and watch for the characteristics that lend themselves to caricature. “Approach everything with humor,” he said. He was always reading the news and history, Susan said.

With the decline of printed newspapers, he said he hopes today’s generation finds a way to keep the genre alive.

He enjoyed surprising himself every day for 60 years, he said.

About his daily output, his wife said, “Keep in mind, from sketchbook to drawing, first he worked it out in pencil [with accompanying text as well as image] and then he went to his desk and with ink and pen or quill; he drew that day’s work by noon. Then he’d scan it and send it to the syndication office. … The mornings were intense.”

That was just during the most recent years since computer technology made it possible. Before the mid-1990s, he’d have his daily cartoon picked up and delivered. 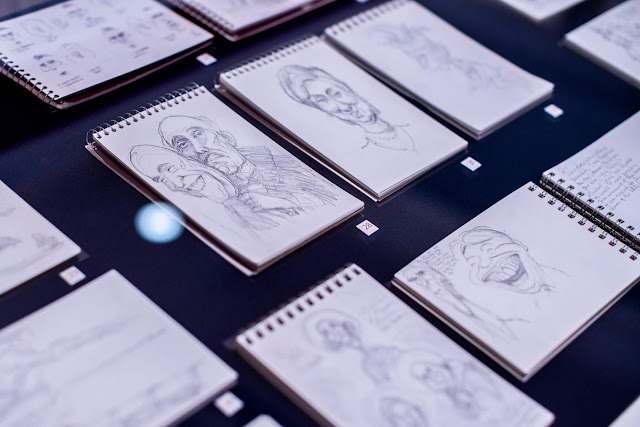 With cases of sketchbooks on display, visitors can see the genesis of Oliphant’s ideas. The sketchbooks show the range of his work, including how he developed his caricatures. Turner compared Oliphant’s caricatures to the characters drawn with words in Charles Dickens’ novels.

Looking from sketchbook to finished image, Schwartzburg said, “You can get an idea of his process and insight, and a full sense of his art’s meaning.”

The exhibit opening also featured a special program on Tuesday at the Miller Center, “Cartooning the White House: Celebrating Comic Artist Patrick Oliphant,” that treated a packed audience in Newcomb Hall Theater to two panels – one with historians and the second with practitioners, who reflected on a set of era-relevant Oliphant cartoons.

Turner said Patrick and Susan Oliphant had a positive experience at UVA 10 years ago when they came for an exhibit and program at the Miller Center. At that time, he gave talk-and-draw presentations.

When thinking of an institution that could “bear the weight” of his work, the Miller Center’s study of the presidency and the Special Collections Library’s ability to house and create access to the work made it an attractive repository.

“There’s great potential for research with an archive of this substance being here at UVA,” Turner said. “UVA can make the process of inquiry into Oliphant’s world transparent, including his art and archive.”

To that end, the exhibit’s curators invited six faculty members, chosen for their teaching and research strengths, to pick four cartoons from a particular presidential era and write a short commentary about them. Next semester, six other faculty members will pick other groups of four cartoons.