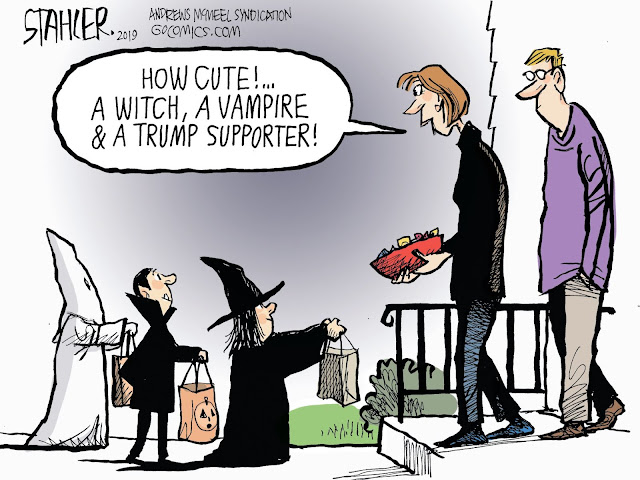 The October 30 cartoon by Jeff Stahler depicted trick-or-treaters dressed as a witch, vampire and ghost with a hood. “The woman answering the door says, “How cute! … A witch, a vampire & a Trump supporter!”

Readers complained to the Daily Free Press that the cartoon made Trump supporters look racist, the paper reported.

“When it comes to sensitive issues such as race and religion, political cartoonists often struggle with where to draw the line,” the Daily Free Press stated. “While reaction to Stahler’s Halloween cartoon has been extremely negative in Elko, the vast majority of readers who posted comments on his Facebook site enjoyed it. But that popularity doesn’t make it suitable for everyone’s consumption.”

“Our readers have made it clear that they expect more discretion from us,” the paper continued. “We can’t promise to not run any more anti-Trump cartoons with another year ahead of us before the election, but we pledge to do a better job of sorting out those that draw on hatred as an attempt to generate humor.”

iMediaEthics has written to the Elko Daily Free Press to ask how many readers complained. We’ve also contacted the cartoonist to ask if he had any response to the apology from the paper.
Published by Bado at 12:00 AM