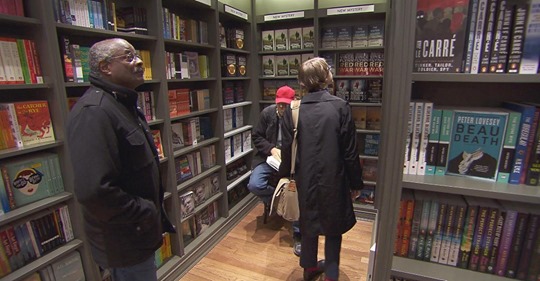 "Bookstores are back and they're back in a big way," he said. "I'm not giving to to hyperbole -- it was record-breaking for us."

The Manhattan sanctuary is part of a resurgence of independent bookstores nationwide. Customers who visit the story can stumble upon a new author or linger over a latte while a special machine can print a book in three minutes if it's not in stock.

The rebound comes after years of competition from deep discount superstores and online behemoth Amazon, which together turned small shops into an endangered species.

According to the American Booksellers Association, the number of independent bookstores fell by approximately 40 percent between the mid-90s and 2009. They have recovered some of those closures, and this year, sales are up more than five percent over a year ago.

The localism movement has been a driving force. Customers are increasingly spending in their neighborhood stores.

"When you come into a store like this and you don't know what you want and you browse these shelves, you're gonna find books that you didn't know existed. If you are ... engaged in your community, curating your content, having people work the store that are knowledgeable and passionate about books, there absolutely is a formula for success," Teicher said.

That specialized service, combined with a sense of community, is putting the indie bookstore back on consumers' holiday shopping list.