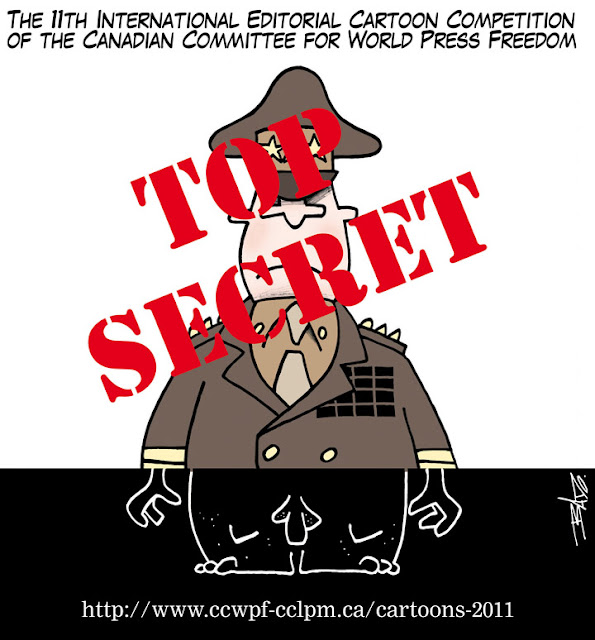 1. The theme for the 11th International Editorial Cartoon Competition is:
“Wikileaks” and its creators:  villains or heroes?

The Internet and the growth of social networking have greatly enhanced freedom of expression and people’s access to information.  The “Wikileaks” revelations has shown us the degree to which the US, like many governments, operates behind a veil of secrecy and severely limits the information citizens need to participate in a free society. While the First Amendment protects freedom of speech, some legislators are calling for the prosecution of Julian Assange and insist that the disclosures threaten international relations. You be the judge.

2. Prizes: three prizes will be given: a first prize of $1500, a crystal trophy, plus a Certificate from Canadian UNESCO, a second prize of $750 plus a certificate, and a third of $500 and certificate. All sums are in Canadian dollars. Ten additional cartoons will receive an ‘Award of Excellence.’ Regrettably no financial remuneration accompanies the Awards of Excellence.

5. The name, address, telephone number and a short biography of the Cartoonist must be included in the submission.

6. The Canadian Committee for World Press Freedom shall have the rights to use any of the cartoons entered in the Competition for promotion of our Editorial Cartoon Competition. Entrance by the cartoonist is deemed acceptance of this condition.

7. The winners of the Cartoon Competition will be announced at the World Press Freedom Day Luncheon held at the National Arts Centre in Ottawa, Canada on Tuesday, May 3rd, 2011 as well as being advised by e-mail. The winner’s names and their cartoons will be posted on the CCWFP web site: http://www.ccwpf-cclpm.ca/

8. The best 30 cartoons will be exhibited at the Luncheon.

The deadline for receipt of Cartoons is 5 p.m. Friday, April 8th, 2011.
Send submissions by E-mail to: info@ccwpf-cclpm.ca
Cartoons should be in jpeg format at 300 dpi