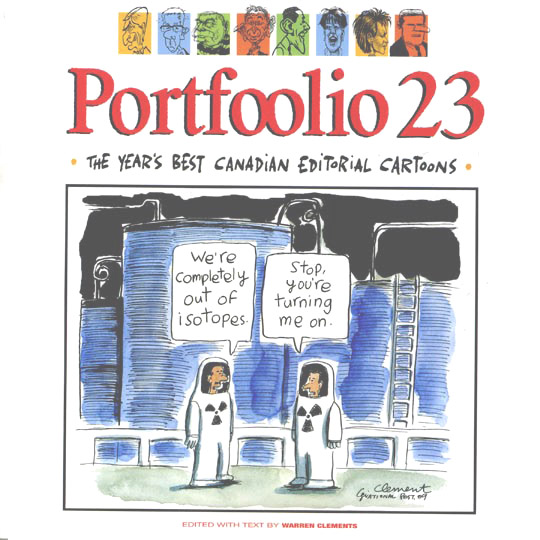 Quebec cartoonists need only wait for politicians to hand them ideas

There was much grief and gnashing of teeth in certain quarters when Dubya sashayed out of the White House this year, and when Sarah Palin failed to make it in, with John McCain.

No, not only among the Republicans, silly. But also among editorial cartoonists.

Similarly, there was sadness in these parts - not only Liberals - when Stéphane Dion got the boot as boss.

On the other hand, Canadian editorial cartoonists aren't complaining about his replacement, Iggy, as a target. Or, for that matter, Chuckles Harper.

Sure, the world is on the brink of disaster: swine flu, economic crises, global warming, North Korean nuclear testing, Twitter, John Minus Kate Plus 8.

But what a grand time our cartoonists are having depicting our planet's demise in their gloriously irreverent drawings.

To many local anglos, there may appear to be only two kinds of compendiums of Canadian editorial cartoons: those by Terry Mosher (Aislin), such as his most recent and 42nd delight, Shenanigans, and those in which Aislin merely contributes, along with colleagues across the country, such as the new Portfoolio 23: The Year's Best Canadian Editorial Cartoons.

And as Aislin would be the first to mention, this country is a hotbed for editorial cartoonists. This province in particular.

And for the record, some of the above - Chapleau, Côté, Garnotte, Rosen - have also released their own solo volumes.

But all of the above, as well as representatives from across the land, are included in Portfoolio 23: The Year's Best Canadian Editorial Cartoons. And what a year it has been.

Then again, so were the preceding 22 years, documented in previous Portfoolio editions. And, likely, so will be the years to come, until the planet blows up.

Their drawing styles may contrast dramatically, but these Canadian cartoonists all share one thing in common: they take no prisoners when lampooning ludicrous politicos and alleged cultural icons, not to mention the sad state of the universe.

It is, of course, to laugh. Which beats the alternative all to hell.

Rosen feels that Quebec produces an inordinate number of acidic cartoonists for a couple of reasons.

"For starters, there are an inordinate number of daily, weekly and monthly and whatever newspapers in this province, almost all of which employ cartoonists," says Rosen, who has seven of his creations, in Portfoolio 23, including the back cover. 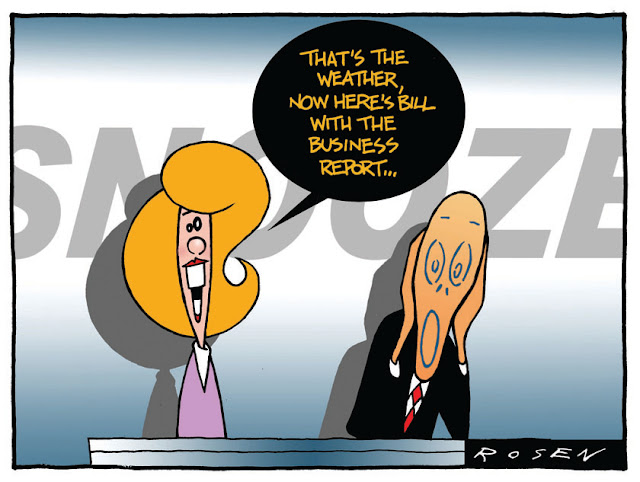 "But more to the point, Quebec politics just makes it so easy for us. And, as an added bonus, Montreal politics have suddenly become juicy. Add to that the seemingly annual federal elections, and there's just never a dull moment here.

"You don't even have to come up with ideas here anymore. The politicians pretty much just hand them to you. And then there's the whole world stage for fodder - be it the U.S. or North Korea. These are golden times for editorial cartoonists."

Rosen, a one-time CBC Radio traffic reporter, has been doodling since he was a young teen. Not long after, he did editorial cartoons for the defunct local underground paper Logos.

His inspirations were famed American cartoonist Robert Crumb as well as Aislin - who also did time at Logos - and Chapleau.

"When I began, I tried doing Aislin's masterly cross-hatching style, but over the years I've simplified my style," notes Rosen, who drew for Hour for 10 years before moving over to the Mirror seven years ago.

"I'd say I was more of a minimalist now. Actually, I'm moving closer to the Looney Tunes style - which may be because I'm a big fan of Tex Avery and Chuck Jones.

"But I love doing the Canadian party leaders. They look like Star Trek characters: Harper is Kirk, Iggy is Spock; and Jack and Gilles, the two expendable crewmen on the ship.

Canadian politicians are essentially a gift to cartoonists. It's the good-looking politicians like Obama who are a problem. It takes time to get their likeness into caricature."

Rosen faces different challenges than fellow cartoonists who work for the dailies. "It would be a blast to get in there four or five days a week and draw on the topic du jour," says Rosen, who has had a cartoon published in the New York Times.

"The difficulty about cartooning for a weekly is to pick a story that will have legs for a week. There's a lot of serious head-banging on Monday morning before my deadline trying to find that story."

But Rosen, like the others, is at least blessed to live in a place where there is no shortage of enduring stories - soaps, sitcoms?
Published by Bado at 6:50 PM