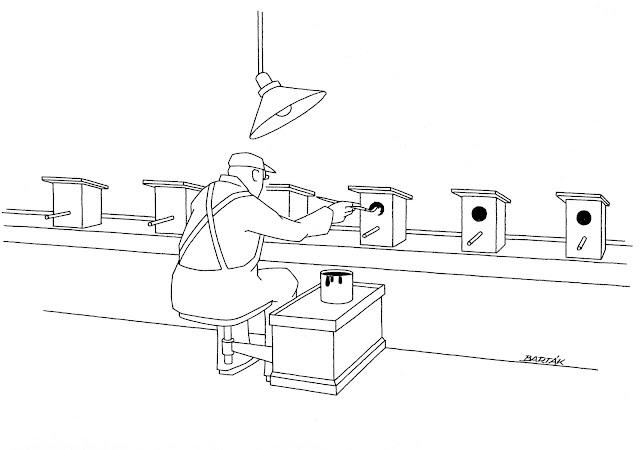 Miroslav Barták, born in 1938, is a self-taught cartoonist and a licensed sailor. Since 1960 he has been a free-lance humorist, cartoonist and illustrator. In 1969-2003, he was responsible for 70 solo exhibitions in Europe, 8 books, illustrations for 50 books at home and abroad, 2 animated films, 52 short cartoons (blackouts) for TV, and participated in many books and journals of cartoons both in Europe and overseas. Since 1970, he has been a core contributor to the Swiss satirical magazine Nebelspalter and has also worked for Das Magasin in Zürich. He lives near Prague in a house with a large garden, with his wife Teresa - a textile artist - and six cats. Two dogs - Barunka and Beránek - live in the garden. Those who help him stay in a good mood are Woody Allen, James Thurber and Tom Sharpe.
Published by Bado at 6:58 AM