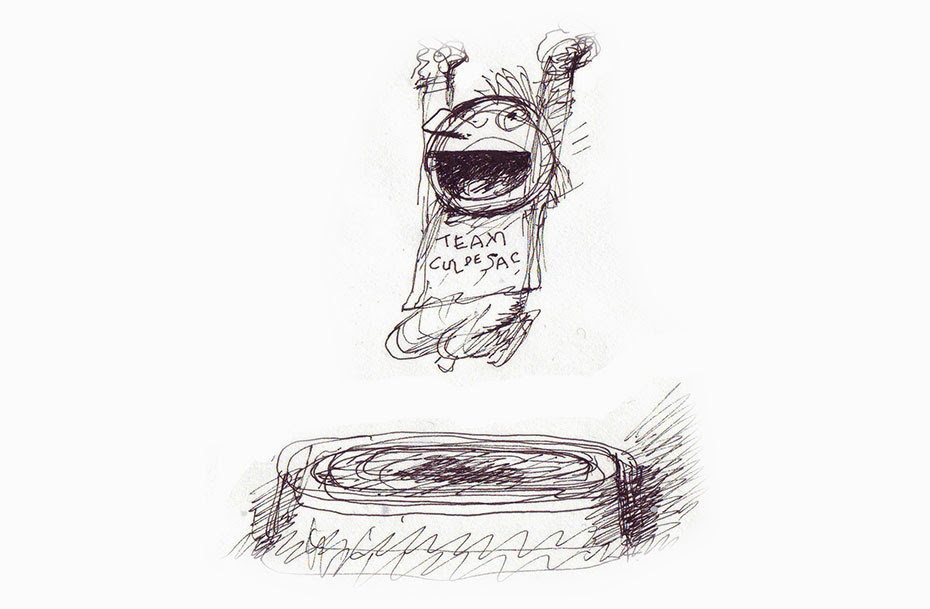 Thompson is the creator of Cul de Sac, a delightful daily comic strip that features the Otterloop family: Alice, Petey, Mom (Madeline), and Dad (Peter). There are dozens of incidental characters, including a loquacious guinea pig named Mr. Danders. The first time I saw the strip a few years ago, I was flabbergasted. I can remember the precise strip from February 16, 2009: look at the sophistication and humor in four panels, none of them the same width or the same or framing (or perspective), even though the actual subject matter is a family heading to a restaurant for dinner. I particularly liked Petey's flash-forward terror in a silent panel while he imagines a boat-bric-a-brac hanging above him like the Sword of Damocles.

As a big fan of comics, the multi-layered humor and sweetness of Cul de Sac made me assume it was decades old, and I'd missed it for all those years. Not so: it had gone into syndication only 18 months before I'd seen it. It's rare to see a new strip targeted for newspapers, as opposed to a pure webcomics offering, as the precipitous decline of newspapers' revenue and profits have led them to shed comics like ballast. The balloon is still plummeting to earth. This despite the relatively low cost of cartoons, and the consistently high ranking in reader polls that nearly uniformly puts comics at the top of the list as to why someone subscribes to or purchases a paper in the first place. (School sports coverage, also largely cut back with staff cuts everywhere, is also a prime reason to read a local paper.)
Thompson has been an illustrator for decades, and had a long-standing relationship with the Washington Post's lifestyle section, which, for years, published Richard's Poor Almanack, barbed but pleasant political humor and caricature. His best known item is likely a cartoon featuring strung-together malapropisms of George W. Bush in 2002 called "Make the Pie Higher." That cartoon was even fact-checked and confirmed by Snopes after the text of the poem spread far and wide. (The original post is behind the Washington Post's pre-2005 paywall.)
Thompson is a lifelong Virginian, living near D.C., and while he doesn't work in government (his father worked for the FDA), he is quite literally surrounded by bureaucrats in his suburb. Thompson's Post editor had asked him for years to consider creating a strip with D.C. denizens, and Cul de Sac ultimately launched as an occasional Sunday-only strip in 2004. (The early work is collected in Cul de Sac Golden Treasury.)
The strip launched in general syndication in 2007 through Universal Press Syndicate, with the same family focus but with less about D.C. Thompson joked that he has perfect timing, launching before the financial meltdown that left already-weak papers gasping for air. Nonetheless, Cul de Sac has found its way into nearly 250 papers, his syndicate tells me, but also racks up 30,000 daily page views on the syndicate's comics portal. That's a far cry from the 1,000-plus newspapers that popular strips used to command, and that some of the older ones still do, but it may be the best that can currently be hoped for with even a strong debut. Thompson also has four Cul de Sac books out: three smaller collections and an annotated omnibus. (Syndicates receive around tens of dollars per week from a newspaper for each comic, varying by strip and the paper's circulation, from which fees are paid to the cartoon's creators.)
I became an instant fan, pestering everyone I knew to read it. The strip's plot follows the Otterloops at home and Alice's preschool mostly. The point of view is often that of Alice, who on a scale from Jeffy in Family Circus to Calvin (the tiger's friend) falls somewhere in the middle with strong touches of Zippy the Pinhead. Alice has no malice. Her brother, Petey, is the flip side: highly introverted, he reads the comic Little Neuro, in which the main character is so paralyzed with inaction that he primarily stays in bed motionless. Petey obsessively tracks his ranking on the world's pickiest eaters Web site, which has real-time updates. (Thompson, in his 50s, is a persistent if not voluble Twitter user, as @pooralmanack, where I made his acquaintance a few years ago, and irregularly updates a blog with often long posts.) 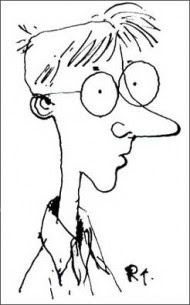 Self-portrait
Richard Thompson
The plots vary between the everyday (Richard has two teenaged daughters who provided inspiration), and extraordinary flights of prosaic magic, in which backpacks explode because of a buildup of gases, a friend of Petey's may or may not be imaginary, and a convoluted playground set reconfigures itself and distorts time and space. "It's like, why should rules of physics obtain in the comic strip? There's no reason," said Thompson, noting that reality seems inconsistent and nonsensical to little kids. A sequence in which a broken jack-in-the-box slowly unwinds captures the perfect unexpected horror of childhood's ordinary moments.
Thompson's art is beautiful, with each strip a unique composition. He uses a shaky and natural line, with quite a bit of variety, to provide the fast, quick feel of a sketch but full of details if you look closely. Your brain fills in the missing pieces. Some installments have different perspective and composition from one panel to the next. It is no surprise that Bill Watterson is a fan of Thompson's. Watterson wrote the foreword to Richard's first collection, and contributed an original painting of Petey to a charity fundraising project for Parkinson's research (discussed later in this article).
But this year, it's been trickier to see Richard's line in action. He found out he had Parkinson's about a year after syndication started, and it has affected him in fits and starts. He tires. His voice weakens. And some days, it's more difficult to summon the physical energy to get things done than others. Thompson notes that no two cases of Parkinson's manifest the same way, and thus its progression isn't clear.
He took six weeks off from the strip in winter to participate in an intensive physical therapy regimen called "Big and Loud," in which broad motions and vocal therapy are used to retrain muscles and the voice. (The full name is Lee Silverman Voice Treatment [LSVT] Loud, a voice therapy, which dates to the early 1990s, and was recently expanded to include LSVT Big, focusing on overall movement. The programs are proprietary and licensed to therapists to conduct.)
During that time, Richard handed off writing and drawing to a set of friends and colleagues. Michael Jantze, a cartoonist and animator who it was my pleasure to interview for some New York Times' articles over a decade ago (including this one about characters blogging), offered to help out some months before. Friend of BoingBoing and regular Gweek podcaster panelist Ruben Bolling is one of Thompson's heroes, he said, and agreed to help as well. (Ruben talks about subbing for Richard in the March 25 podcast.) In the end, six cartoonists stepped up. (Thompson is generally beloved among fellow cartoonists, who gave him the National Cartoonist Society's Reuben Award for Outstanding Cartoonist of the Year award in 2011.)
When Thompson returned, Cul de Sac came with a change as well: he hired an inker, Stacy Curtis, a cartoonist and multi-discipline artist. If you compare Curtis and Thompson's styles, you can see a high degree of congruence. And looking at the new strips, you can see how the vocabulary is being worked out between the two. Curtis has a looser adherence to the character models than their creator, and puts more personality into lettering. It's fascinating watching the outcome of the conversation between the two: Curtis isn't a slavish imitator nor a machine, but Thompson's hand (and voice, as he writes each strip) is still evident. Richard said via email, "Working with someone else's hand in mind when I draw a rough is uncharted territory. And it is for Stacy, too. He's got his own style and I don't want him to hide it, to mimic me like he's following a stylebook."
While Thompson has reworked his cartooning career, and had to put other illustration on the back burner, one of his friends has launched a lovely fundraising project at the Michael J. Fox Foundation's TeamFox campaign site. Chris Sparks, a former comicbook store owner, met Richard in 2008, coincidentally not long after the Parkinson's diagnosis was given.
Sparks is now a Web designer, and conceived of the notion of asking artists to contribute original work for auction that was based on Cul de Sac characters. With Richard's permission, Sparks talked up the project at the annual cartooning awards ceremony, and quickly was flooded with interest and then submissions, including the Watterson painting noted above. It is a crazily long list of artists, including artists like Mad's Sergio Aragones, Cathy's Cathy Guisewite, Lynn Johnston (of "For Better or Worse," one of the most popular daily strips of the modern era), and children's book author Mo Willems.
Sparks set an ambitious goal of $250,000 for the auction, being handled by Heritage Auctions, and scheduled for June. The work will also appear in a book due out in that month (from Andrews McMeel, an imprint of Thompson's syndicate), the earnings of which will also be contributed to Team Cul de Sac. The book can be pre-ordered from the usual suspects, or in both regular and a limited signed edition from Sparks' Team Cul de Sac site, where he will donate an additional amount to the fundraising effort. Sparks hopes to have an annual fundraiser.
Thompson is still feeling his way around the limits of his condition, and how that will allow him to continue with his work. He seems to have an infinite amount of good will among his colleagues and syndicate, which goes a long way to sorting out his future. "You want your daily life to be unaffected as much as it can be," Thompson says. In the world of Cul de Sac, his characters still cavort with the same ease.
Published by Bado at 4:00 AM