Since Beletsky is the driving force behind this exhibition, here, in his words, is how it came about:

How did you conceive this exhibition?


I came to the US from Russia in 1989, when it was still the USSR. For many years, as the Soviet Union fell apart and Russia became democratic, and later, when it took a turn back to authoritarianism under Putin, I have been largely out of touch with the people and the events there. In the last several years I've been catching up, thanks to the Internet. Although the current regime in Russia has seized control of most traditional media, it left the Internet alone, writing its users off as irrelevant. Blogging came to replace the free media in that country.

I, too, started a blog in Russian. This allowed me to connect and communicate with many designers and design educators in Russia, including Serge Serov, the president of the Golden Bee Biennale in Moscow. In one of the articles I wrote for my blog back in 2009, I analyzed the first Obama presidential campaign, new possibilities of grass roots organizing via the Internet, and the success of guerrilla tactics of Shepard Fairey, whom I knew from my RISD days. It fascinated me how the technologies were able to bring people together in so many new ways. Based on the recent experience of the Green Revolution in Iran and the Arab Spring I suggested it was only a matter of time that it also happened in Russia.

When the levee of Russian political apathy suddenly broke last winter following the notoriously dirty parliamentary elections, the people took to the streets in numbers unseen since the fall of Communism in the early 1990s. Just like in the Middle East, it was the Internet that allowed them to feel their strength in numbers. The first large scale demonstration on Bolotnaya Square last December was brainstormed and organized via Facebook. People shared thousands of photographs via Instagram and used Twitter to coordinate their movements. Suddenly, as it became fashionable to have a political opinion, everyone had something to say.

As I watched the unfolding events (on Facebook), I pondered hundreds upon hundreds of DIY posters people carried at the demonstrations and others photographed and shared in social media. Some of them were clever, others offensive, but none well-designed. This was in Russia, that has produced some of the most effective and striking political posters of the 20th c. This was in Russia, that prides itself on the influential school of contemporary poster design. It seemed to me there was no shortage of good designers there, but there was a lack of initiative.

I wrote about this conundrum at first, but then decided to take the initiative myself and attempt to bring the designers together in the virtual space to help the cause. I suggested the idea to Serge Serov, who was very receptive and happily agreed to add a political poster design competition with a separate exhibition at Artplay Design Center as a part of the Golden Bee Global Biennale upcoming this October. We quickly set up a Facebook page and solicited entries from design professionals.

We also thought it would be wonderful if we could get the international design community involved in the cause much in a way they responded to the cause of the 2010 SVA poster exhibition “Where Is My Vote? Posters for the Green Movement in Iran.” We reached out to you and to Francis Di Tommaso, the director of SVA's Visual Arts Gallery, who helped to organize the Iran show two years ago. To our delight, SVA agreed to host the show in New York.

What was the response from the Russians regarding your invitation to participate?

Is the political situation so dire in Russia that this outcry is, in fact, useful?

It is not as dire, say, as it is in the Middle East, but dire nonetheless. The current regime is openly disdainful of its constituents and while it generally does not threaten their lives, it does assault their human dignity and their basic freedoms. Our hope is to help lend a well-pitched voice to the outcry.

What surprised you most about putting this together?

My biggest surprise was the strong body of work contributed by Natalia Ilyin's students from Cornish College of the Arts, a small school that is not on everyone's radar. Their posters could hold their own next to the pieces created by well-known and well-established contributors.

A bear kicks a caricature of Russian President Vladimir Putin out on Robert Grossman’s poster, which also includes the words “Takeout Putin.”

The Bukheyevs’ Election Circus has the imperial two-headed eagle, juggling black and white balls in a circle to symbolize the contested elections.

The SVA Westside Gallery is located at 141 West 21 Street between 6th and 7th Avenues.
Open Monday through Friday, 9am to 7pm
Saturday, 10am to 6 pm
closed on Sundays and public holidays, including September 16-18 for Rosh Hashanah.
Admission is free. 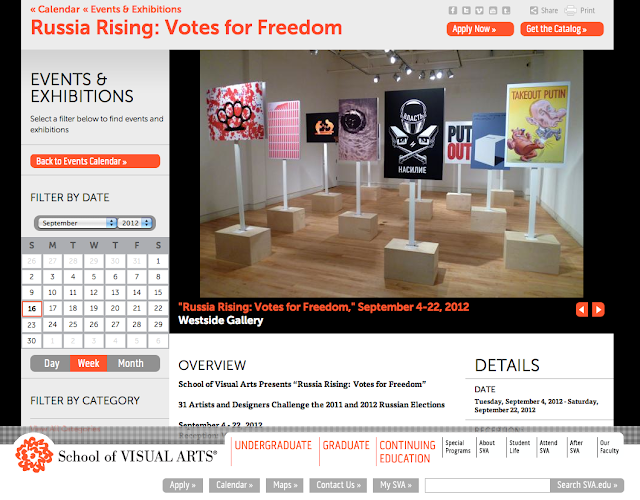