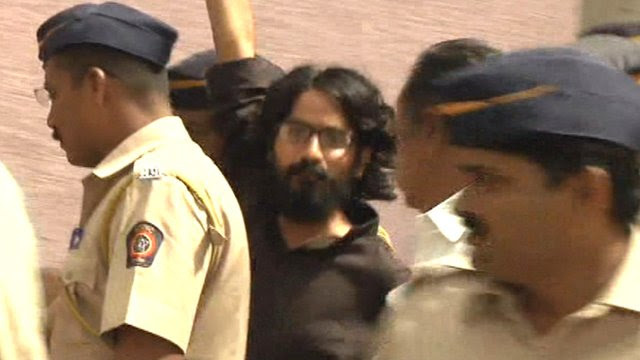 Protesters outside court chanted: "He is not Aseem but he is a storm, he is the nation's another Gandhi"

The arrest of an Indian anti-corruption cartoonist on sedition charges has sparked widespread criticism.

Aseem Trivedi appeared in court in Mumbai and was remanded in custody until 24 September for cartoons allegedly mocking the constitution.
Mr Trivedi is demanding the charges be dropped. Many Indians see his arrest as an attack on freedom of expression.
The cartoonist has been participating in the anti-corruption movement led by campaigner Anna Hazare.
"As of now we demand sedition charges are dropped against him," Mr Trivedi's lawyer, Vijay Hiremath, said after Monday's court hearing, AFP news agency reports.
"Obviously they don't have a case so they should have dropped it instead of giving him judicial custody."
Continue reading the main story

Have Indians become more intolerant? On the face of it, yes”

Soutik BiswasIndia correspondent
Mr Trivedi was arrested on Saturday for a series of cartoons lampooning politicians. He refused to apply for bail at Monday's hearing, and said if telling the truth made him a traitor then he was happy to be described as one.
In one of his cartoons the customary three lions in India's national emblem are replaced with three wolves, their teeth dripping blood, with the message "Long live corruption" written underneath.
Another cartoon depicts the Indian parliament as a giant toilet bowl.
Government officials say that while they are in favour of free speech, there is a thin line between that and insulting national symbols, the BBC's Sanjoy Majumder in Delhi reports.
But Indians have condemned Mr Trivedi's arrest, calling it a "wrongful act". Protesters on social networking sites said it was shameful that corrupt politicians were being let off while those who highlighted corruption were being jailed.
"From the information I have gathered, the cartoonist did nothing illegal and, in fact, arresting him was an illegal act," the chairman of the Press Council of India, Markandey Katju, told The Hindu newspaper.
"A wrongful arrest is a serious crime under the Indian Penal Code, and it is those who arrested him who should be arrested."
Mr Katju, a former Supreme Court judge, asked how drawing a cartoon could be considered a crime, and said politicians should learn to accept criticism.
"Either the allegation is true, in which case you deserve it; or it is false, in which case you ignore it. This kind of behaviour is not acceptable in a democracy," he said.
The editor of CNN-IBN news channel, Rajdeep Sardesai, said he found it "amusing but also very dangerous that you can get away with hate speech in this country, but parody and political satire leads to immediate arrest".
A former senior police officer and lawyer YP Singh told the Mint newspaper that from "what I have heard, it seems he [Mr Trivedi] can be booked at the most under a law to prevent insults to national honour and not on serious charges like sedition, which attract much harsher punishment".
If proved, a sedition charge can bring a three-year prison term in India.
Police detained him on Saturday after receiving a complaint from a Mumbai-based lawyer who said his cartoons were anti-India.
The arrest of Mr Trivedi comes after other recent controversy over cartoons in India.
In April, police arrested a professor in the eastern city of Calcutta for allegedly posting cartoons ridiculing West Bengal Chief Minister Mamata Banerjee on the internet. He was later released.
A month later, a row over a cartoon showing Dalit icon BR Ambedkar in a school textbook disrupted the Indian parliament.
Your comments (321)

More on This Story