End of the line for "Cul de Sac"

Richard Thompson announced yesterday on his blog that he would no longer be drawing "Cul de Sac". 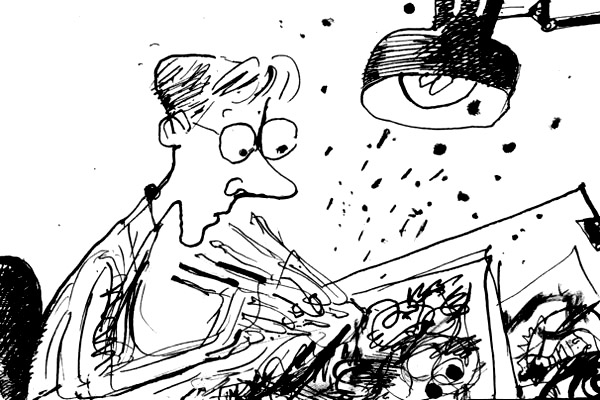 After the fold, a tribute by David Apatoff and an interview by Michael Cavna:
David Apatoff in Illustration Art:

America's great poet, Walt Whitman, worked most of his life writing and revising his epic poem, Leaves of Grass.  He would add or subtract new sections and change lines,  refining his masterpiece.

But Whitman fretted that he might not realize when his age and disabilities were beginning to erode the quality of his masterpiece:


As I sit writing here, sick and grown old,
Not my least burden is that dulness of the years, querilities,
Ungracious glooms, aches, lethargy...
May filter in my daily songs.

To protect his work, Whitman had to recognize when he was no longer capable of doing his very best.  Even more important, he had to have the strength of character to give up what he loved when the time came.   It is tempting to lower your standards just a little bit, and continue to milk your past successes a little longer.   It's hard to love your art more than yourself.

I have previously written of my great admiration for the work of Richard Thompson.  His hilarious comic strip, Cul de Sac has been an oasis of talent and intelligence on the comic page for years.

Yesterday Richard announced with his typical grace, dignity and humor that he is ending his strip because Parkinson's disease prevents him from maintaining his standards in a daily strip. 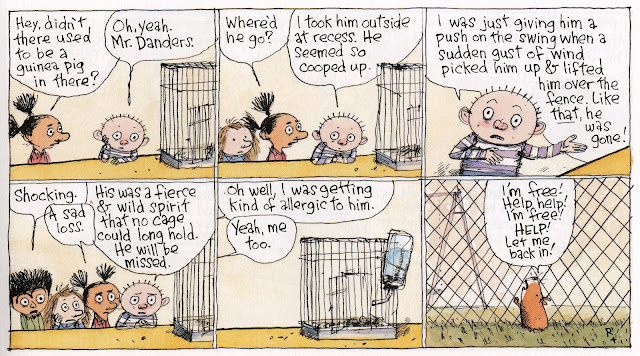 He will continue to work on other projects.

These days the comic pages are filled with strips that long ago became franchise operations, handed down from generation to generation or subcontracted out by Baldo Smudges.  But Thompson explained why he could not lighten his own burden by subcontracting the words or the pictures in his strip:


I was having trouble separating the writing and the drawing. I found that one fed off the other more than I'd realized, that it was an organic process, to use pretentious art talk. Most of the time I'd start a strip with no clear idea where it was going, or There'd be an end without a beginning. And I'd figure it all out as I was inking it, which isn't the best way to work....

Thompson's gentle whimsy is so light, it floats on air.  His style, sweet and self-deprecating.  Yet, we see in  yesterday's announcement that you don't stay the best comic strip by having mushy standards.  The same unflinching honesty that made his strip special every day made it impossible for Thompson to continue the strip.  His standards were always as hard as diamonds, and for that reason the legacy of Cul de Sac is assured.

THIS IS THE NEWS I never wanted to write, but last year feared I’d have to all too soon.
Richard Thompson, widely acclaimed among his peers as the best all-around comic-strip creator working today, won’t still be wearing that crown in six weeks. That’s because Thompson has decided to stop working as a comic-strip creator: He will end his beloved strip “Cul de Sac” on Sept. 23.
Thompson and his syndicate, Universal Uclick, are making the announcement Friday at 10 a.m. ET.

View Photo Gallery: The award-winning cartoonist has decided to end his celebrated strip amid his battle with Parkinson’s disease.
The Kansas City-based syndicate is informing newspaper editors in a letter that reads: “The last year has been a struggle for Richard. Parkinson's disease, first diagnosed in 2009, has so weakened him that he is unable to meet the demands of a comic strip. For a time, he worked with another artist, but the deadlines became too much of a task.”


Of the Parkinson’s, Thompson, 54, says in a comment released by his syndicate: ”At first it didn’t affect my drawing, but that’s gradually changed. Last winter, I got an excellent cartoonist, Stacy Curtis, to ink my roughs, which was a great help. But now I’ve gotten too unreliable to produce a daily strip.”
“Cul de Sac” debuted as a weekly feature in 2004, in the Valentine’s Day issue of The Washington Post Magazine. Thompson had previously launched his weekly comic “Richard’s Poor Almanac” in 1997 in The Post’s Style section.
Universal rolled out “Cul de Sac” as a daily strip in 2007. “Cul de Sac” is syndicated to more than 250 newspaper clients. Thompson said through his syndicate: “I’m thankful for all the newspapers who took a chance on ‘Cul De Sac.’ “
[THE RICHARD THOMPSON PROFILE: ‘Cul de Sac’ creator faces life’s cruel twists with artful wit]

(CUL DE SAC / Richard Thompson - Universal Uclick)
In May, Universal’s parent, Andrews McMeel, published “Team Cul de Sac: Cartoonists Draw the Line at Parkinson’s,” an art book for which more than 150 of Thompson’s peers donated illustrations for charity. A companion auction of the art raised money for Parkinson’s research.
Comic Riffs caught up with Thompson late Thursday to talk about his decision, his health and where his brilliant brain might seek creative outlet next:
.

. (RichardTthompson - Universal Uclick)
MICHAEL CAVNA: How did you come to this decision now, Richard? Was there a moment that this choice became clear, or has this been a long and gradual decision -- perhaps one that had a tipping point?
RICHARD THOMPSON: I’ve known for a year or more that I was working on borrowed time. My lettering had begun to wander off in 2009, but that could be fixed easily enough. But when Alice’s and Dill’s heads began to look under-inflated last winter, I figured I was losing control of the drawing, too. When I needed help with the inking (the hardest but most satisfying part of drawing the strip),well that was probably a tipping point. Parkinson’s disease is horribly selfish and demanding. A daily comic strip is too and I can only deal with one at a time. So it was a long, gradual, sudden decision.
MC: Was there one aspect of creating a daily comic strip that made you decide this was too much? Perhaps it was more the drawing, or the writing, and/or the deadlines? And did you consider letting an assistant -- perhaps Stacy [Curtis] -- carry the load for an extended period of time, or not so much?
RT: The deadlines would be the obvious answer, as I’ve hated and feared them all my life — true of most cartoonists, I’ve found. Yeah, I thought about passing along more of the drawing to Stacy. I thought he did a wonderful job inking my roughs. But I was having trouble separating the writing and the drawing. I found that one fed off the other more than I’d realized, that it was an organic process, to use pretentious art talk. Most of the time I’d start a strip with no clear idea where it was going, or There’d be an end without a beginning. And I’d figure it all out as I was inking it, which isn’t the best way to work and would’ve driven a conscientious editor crazy. One reason I hate and fear a deadline is that I can’t finish a damn thing without one, and everything is mutable right up till the last minute. And often beyond.
MC: How are you feeling these days? And what’s next for you -- short- and medium-range -- in terms of treatment?
RT: Well, I need some work. Last winter I took time off for a month of BIG therapy at Body Kinetics Rehab and it was tremendously helpful. Basically it recalibrates your body using big, exaggerated movements and yelling and silly walks. But then I went back to work and slacked off and began to decline physically. This was when it became clear Parkinson’s didn’t mesh too well with a daily deadline. I got wobblier and had a few falls, and I’ve pushed the meds as far as they’ll go. So the next step is something called Deep Brain Stimulation, where they implant wires in your brain, adjust the current and Boom, you’re good to go. It’s a process that takes four to six months and I’m just starting out.
MC: Is there an overriding emotion you feel now that you’ve made this decision? Relief? Sadness? Resigned joy? Deep gratitude?
RT: All of those. Relief because I’ve not lived without a deadline of some kind hanging overhead for almost 30 years. Sadness because there was more I wanted to do with the strip that would only be possible with a daily format. Resigned joy because I don’t know, because it sounds good. And deep gratitude because I fell into this dream job at the last possible moment and got to produce work I’ll always be proud of and made friends I’ll always respect.
MC: Will you continue to draw, perhaps with less demanding deadlines -- maybe freelance, magazine covers, back to drawing cows for the FDA or Milk Advisory Board? Or are you hanging up your Hunt #101 Imperial for good?
RT: I’m not ready to quit, but I’m sure my work will change. It may look like it was done by Cy Twombly using his sleeve.
MC: How do you feel about having had the space and stage and opportunity to draw “Cul de Sac” for as long as you did -- as well as all the acclaim, respect, fandom, from book sales to the Reuben Award?
RT: Like I said above, I fell into drawing a daily comic strip more by luck than design. And that kind of luck is unimaginable, at least to me. I feel like I’ve squeezed a lifetime career into way too short a time (though I started working on Cul de Sac almost 10 years ago). It took me forever to figure out the Reuben, because it’s one of those “not in my wildest dreams” things. But I finally got it: it’s like finding this fabulous object, an artifact of an ancient civilization that’s far in advance of our own, and it’s crashed in my backyard so I get to keep it.
Mostly, I’m grateful to all who pushed me into this. Starting with [former Post editors] Tom Shroder and Gene Weingarten, on through Lee Salem, Rich West, Bill Watterson, Greg Melvin, John Glynn, John McMeel, Pat Oliphant, [wife and daughters] Amy, Emma and Charlotte Thompson, Shena Wolf, Mike Rhode, [Post column cartoonist] Nick Galifianakis, Chris Sparks, and ending maybe with Anna Glynn or Emily Sparks. Without them I’d still be doing covers for the Milk Advisory Board. And also my Mom, who told me years ago if I ever did a comic strip it’d be pretty wonderful, but I’d probably drive myself crazy.
MC: Any “Cul de Sac” thoughts or sentiments you’d like to say to your many fans?
RT: Don’t wander off yet! There’ll be a joke after the credits.