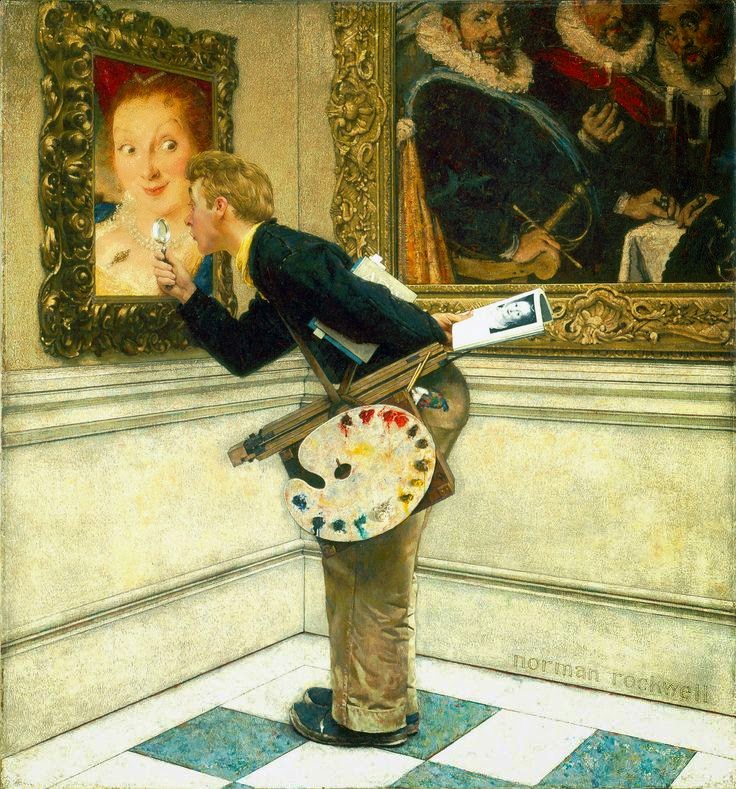 Here's the problem: There is a growing recognition that the commercial work known as illustration art is an important part of American fine art. For instance, Debra Force, former head of Christie's American art department and now a private dealer in Manhattan of 18th, 19th and 20th century American art, claimed that she has sold works by illustrators Rockwell, Maxfield Parrish, N.C. Wyeth, Howard Pyle, J.C. Leyendecker and others to "some of my collectors of American art.

(This is where the problem part comes in.) Major museums, such as the Metropolitan Museum of Art, the Boston Museum of Fine Arts and the Smithsonian Portrait Gallery, are feeling the pressure to expand their definitions of American art to include works by important illustrators, but they've come to this recognition a bit late.

Elliot Bostwick Davis, chair of the Art of the Americas department at the Boston MFA, said that "we've been looking for the right Rockwell to buy for a number of years." Finding the right one has become more expensive over the past decade, as the prices for illustration art (a big category of artworks created for commercial reproduction that includes album covers, cartoons, advertising, movie posters, fantasy and science-fiction images, as well as sometimes racy calendar pin-ups) have been climbing steadily.

In fact, works by illustrators are often the highest selling lots in the American art auctions at both Christie's and Sotheby's. "When I first started working at Sotheby's, in 1972, we sold a Saturday Evening Post cover by Rockwell of a hat check girl for $11,000, which was a record at the time for the artist," said Peter Rathbone, former head of and now a consultant to Sotheby's American art department. "Now, we regularly see works by him selling for more than $1 million."

The largest problem for museums such as Boston's Museum of Fine Arts and others that are interested in adding works by illustrators to their permanent collections, Rathbone claimed, is that prices for the most iconic works have become too great. "The collecting area has passed most museums by in a budgetary way."

Beyond the problem of finding the money to pay for it, most museum curators still aren't convinced that illustration art should be displayed amidst more traditional works of fine art. Does one put a Norman Rockwell next to an abstract expressionist painting, because the two were created at the same time? Should illustration art be collected by museums but exhibited only with other pieces of the same type? The jury remains out on that one.

Where to See Illustration Art

For those who might want to see this kind of artwork in quantity, a number of museums around the country have collections of American illustration art: