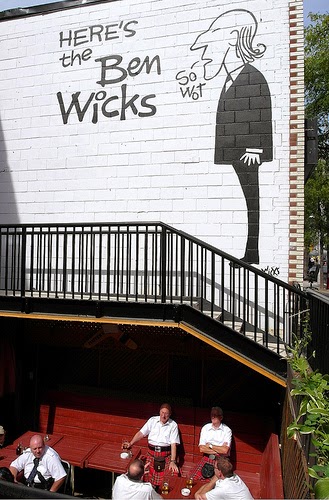 AN END TO AN ERA FOR CABBAGETOWN! IT’S TIME FOR ROBERT TO CHOP CHOP & MOVE-A-LONG

Ben Wicks’ wit, cartoons, philanthropy & love of Canada made him a much respected historical figure in Toronto.

For Twenty-Nine of those years, Robert McEnirney preserved Ben’s great humour & legacy at The Ben Wicks Restaurant & Pub – aka “The Wicks” to regulars; A home away from home quickly adopted by many global visitors.

Robert’s warm, welcoming nature, as well as his passion for people & conversation, was the basis for many deep-rooted friendships which originated while visiting The Wicks.

His dedication to ensuring that ALL of his guests enjoyed each & every visit to The Wicks brought personal satisfaction and happiness to Robert. Robert’s catch phrases over the years have been “Chop Chop, Move A Long, Pay Your Bill”. Well, the bills are paid and Robert has decided that it is his turn to “Chop Chop & Move A Long”.

Robert will always cherish the friendships developed over the years.

Memories, happy & sad, good & bad, of Robert’s 29 years at The Ben Wicks will always be fondly remembered, and without a doubt, spoken of often.

Although “The Ben Wicks” is an end to an era in Cabbagetown, please welcome in its place: The Local Gest in True Cabbagetown Style.

To All the Patrons, Guests & Customers over the past 29 years, Thank You & Cheers.